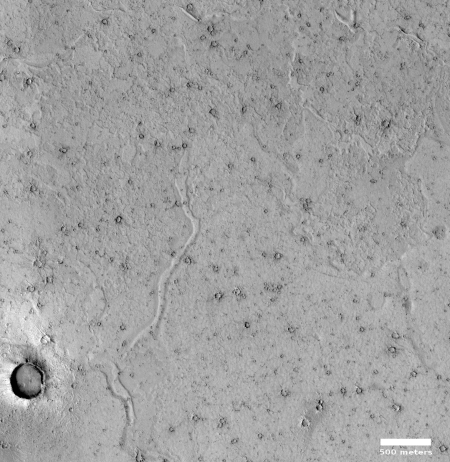 In my never-ending rummaging through the images released each month from the high resolution camera on Mars Reconnaissance Orbiter (MRO), I have sometimes been puzzled by the titles they choose for some photographs. For example, many pictures each month are simply titled “Terrain Sample.” The image to the right, cropped and reduced to post here, is one example, and its content adds to the mystery.

The photograph itself shows a generally featureless surface. Other than the scattering of small craters, there are only very slight topographical changes, the most obvious of which is the meandering ridge to the east of the largest crater.

I wondered why this picture was taken, and why it was given such a nondescript name. To find out, I emailed Veronica Bray at the University of Arizona. She had requested this image as part of her job as a targeting specialist for MRO. Her answer:

1. Primarily, we are a mission of exploration! We have a lot of specified targets to image features of interest like craters, RSL, etc., but one of my favorite activities is getting new coverage! We do not know everything; we must explore!

2. As a spacecraft operations engineer I (we) are responsible for collecting images and for maintaining the good operational temperature of camera. Too high and we risk the instrument turning off to safe-guard the electronics, too low and the images will not be good quality. So, we sometimes add an image to boost our temperatures. As we are under the strict deadlines, these images are often quickest when we specify “terrain sample” rather than trying to find something specific and write a more lengthy science rationale. 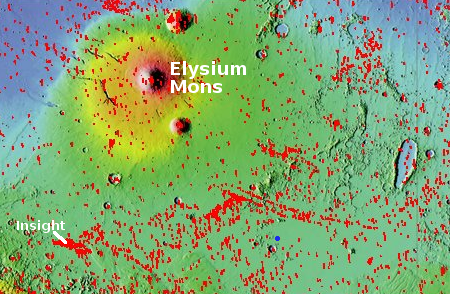 In other words, when Dr. Bray picked this location for photography, she really had no idea what was there. Almost no high resolution images have been taken nearby, as shown by the map to the right, with the red boxes indicating all the high resolution pictures taken by MRO. This image is indicated by the tiny blue dot near the bottom center. As you can see, it is all by its lonesome, making this image the first close-up ever taken of this area, and thus gives us a peek at something no one has ever seen before. To reiterate what Dr. Bray wrote, “We must explore!”

At the same time, this image was taken as much for engineering purposes than for scientific reasons. Apparently to keep the spacecraft functioning properly they must regularly take pictures, even when there are no requests for images. So they do so, and give those engineering images a simple name like “Terrain Sample” because the image was not taken for any specific scientific reason.

As to the geology in this image, Dr. Bray added that she quite rightly cannot comment, based on the image itself. Not enough information. I however can make my own speculations, as I usually do, recognizing as always that my guesses should be taken with a very large grain of salt.

First of all, this location is in the Cereberus Plains, one of the largest regions that is part of the transition zone between southern highlands and the northern lowlands, and nestled between the giant volcanoes Elysium Mons to the north and Olympus Mons to the east. Though these volcanoes are not particularly close, they are large enough and close enough for me to wonder if they may have laid down some volcano flows at this location.

Moreover, the picture itself appears to have a few ghost dunes, features that are formed when lava flows around a dune that eventually blows away, leaving behind the dune footprint.

None of this proves that this is a volcanic surface. A good geologist might tell me I don’t know what I’m talking about. However, as a preliminary theory it is a good place to start, though as with all theories it should be tossed out as soon as the data says so.