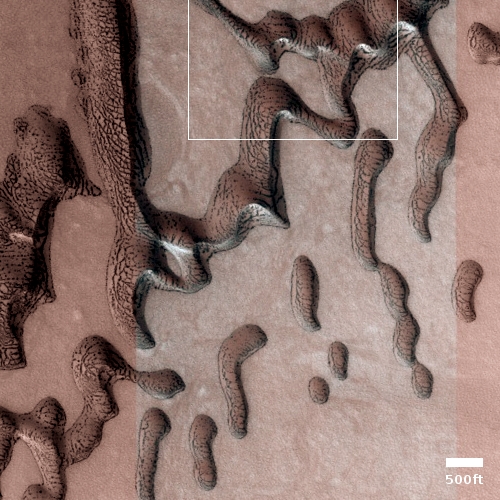 Cool image time! The photo on the right, rotated, cropped, and color-enhanced to post here, was taken by the high resolution camera on Mars Reconnaissance Orbiter (MRO) on October 1, 2020. It shows some large dunes with what appear to be black or dark features across their surface, reminiscent of tiger stripes.

The dunes are located on the floor of 42-mile-wide Kunowsky Crater, located in the northern lowland plains of Mars at the high mid-latitude of 57 degrees north.

What are the tiger stripes? The second image below, provided at the image link, zooms in at full resolution at the area in the white box, and shows that the stripes appear to actually be made up of spots strung together. 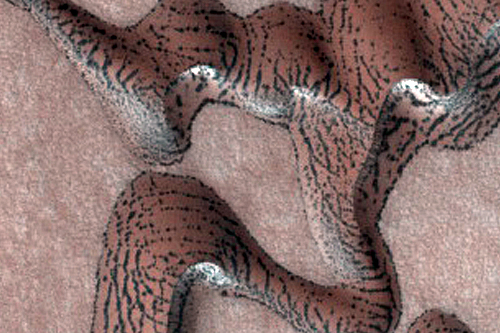 Even this close-up photo however doesn’t really help to explain the dark features.

The first real clue is the latitude. Kunowsky Crater is far enough north that it sits on the edge of the dry ice mantle that get deposited each winter down to about 60 degrees latitude and then sublimates away with the coming of spring. Could these dark features be the sublimation of that dry ice? In both polar regions the sublimation of the dry ice is generally indicated by such dark splotches, seen as what are called “spiders” in the south and simply dark splotches in the north. As I explained at this link:

When spring arrives and sunlight hits this mantle, it heats the ice and sand on which the mantle lies, and that warmth causes the mantle’s base to sublimate back into gas. Eventually gas pressure causes the mantle to crack at its weak points so the gas can escape. By the time summer arrives that mantle is entirely gone, all of it returning to the atmosphere as CO2 gas.

This sublimation process differs between the north and south pole, due to the different terrain found at each. In the north the mantle mostly lies on ice or sand dunes, neither of which is stable over repeated years. Thus, the mantle weak points do not occur at the exact same place each year, even though they occur at the same type of locations, such as the base and crests of dunes.

The cool image above was taken somewhat late in the northern winter, so the dark features could be that dry ice mantle sublimating away. 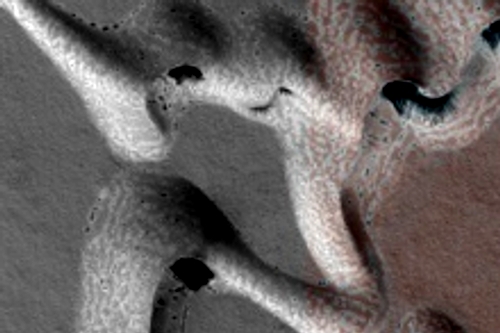 Further clues are found by searching for “Kunowsky” in the photo archive for the high resolution camera. We quickly see that these dunes have been repeatedly photographed since 2018, “to see if (1) dune alcoves are forming and (2) if autumn or winter frost is forming, and if there’s a connection between them.”

The second photo to the right, cropped to match the area in the white box, was taken later in the year, during the summer. Two things are immediately evident. First, only a few dark areas remain. Second, where the dark stripes had been we now see a reddish speckled terrain instead.

What I think we are seeing here is the northern hemisphere’s version of what are called spiders in the south. These large dunes are I suspect relatively stable, so that the sublimation process has the possibility of following approximately the same paths from year to year, though not as consistently as seen in the south. Thus the red speckles mark the repeated path of sublimation from year to year on these dunes. The locations are not consistently the same, but they are close enough to leave these marks.

As for the white areas in the first image above, they have become replaced by dark areas in the second image, and thus could be water ice frost that appears in the winter and disappears with the coming of spring. Water would sublimate away later, since it requires higher temperatures to do so.

Whether these dunes are being reshaped by the coming and going of this dry ice and water frost is impossible to determined from the resolution available to me. We shall have to wait for the publication of the research papers resulting from these photos.