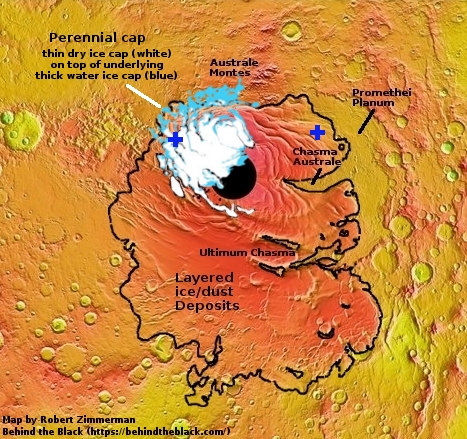 Today we have two cool images, both giving us a tiny glimpse at what it is like in the middle of summer on the fringes of Mars’ south pole ice cap. Their location is indicated by the blue crosses on the overview map on the right.

To review, the south pole on Mars is, like its north pole, mostly made up of a permanent icecap of water. In the south, this icecap is mostly mixed with dust and debris in the area outlined in black and dubbed the layered deposits. On top of this is a smaller thick water ice cap, indicated by light blue, which is in turn topped by a thin cap of frozen carbon dioxide, or dry ice, indicated by white. During the winter the entire pole, down to 60 degrees latitude also gets covered by a temporary mantle of dry ice, that sublimates away each spring.

Now for our cool images! 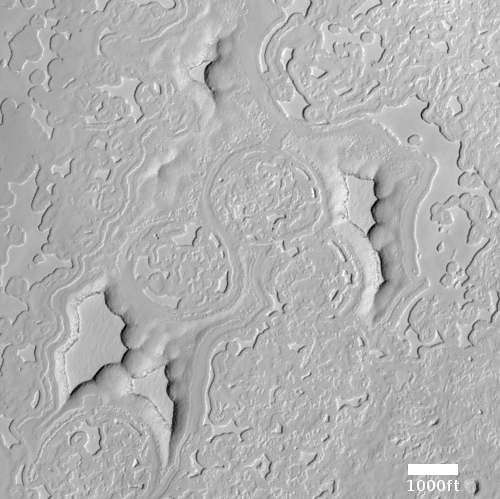 Our first photo, taken by the high resolution camera of Mars Reconnaissance Orbiter (MRO) on September 29, 2020 with its location indicated by the left cross, is situated in a chasm leading out of the carbon dioxide/water ice cap. I have rotated the image so north is to the top, and cropped it to highlight the most intriguing features, all of which resemble what scientists have dubbed cryptic terrain. As noted in this earlier post, these features are usually found on the margins of the south pole icecap.

The strange curlicue cliffs and plateaus seen here are thought to form as part of the arrival and then sublimation away of that seasonal dry ice mantle, but how that process exactly works to create these particular geological features remains I think a mystery.

In this case, this cryptic terrain is not really on the margin of the cap, but within it. What we are seeing here is the aftermath of the sublimation of the mantle of dry ice that had settled onto the permanent cap of both water and dry ice during the winter. It is now the height of summer, and that mantle is likely all gone. The interaction of that new temporary dry ice with the old permanent dry ice sitting on top of a permanent water ice layer certainly played a part in what we see here, but don’t ask me for any details. My uneducated guess is that the lower terrain here is the permanent water ice, with the permanent dry ice sitting on top of the plateaus. There also might be permanent dry ice lower down, but to what extent I don’t have enough information to determine. 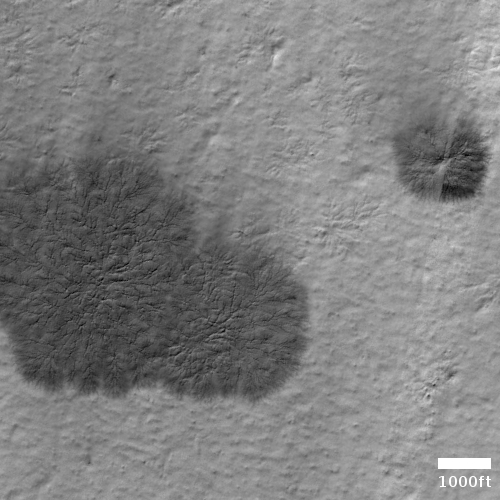 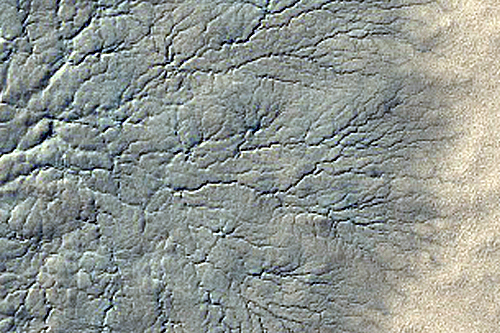 Our second cool image to the right, rotated (north to the top) and cropped to post here, is located at the right blue cross on the outer margin of the cap’s layered deposits. It was taken on September 28, 2020 by MRO’s high resolution camera. In the dark areas you can see complex tributary patterns, the result of the the spider formation process seen in the south when that dry ice mantle sublimates away. This pattern is made even clearer in the color close-up below.

That sublimation begins at the bottom of the mantle, where the ground warms the CO2 and turns it into trapped gas. At some point the pressure causes a break in the mantle, which then vents out to form the dark spiders. As I noted when spring first arrived at the south pole in July,

At the south pole however the vents frequently happen not at dunes [as in the north pole] but on either the layered ice/dirt deposits of permafrost or on solid but friable ground, both of which are more stable than sand dunes. Thus, over time the venting and the transport of that trapped gas occurs in the same places, over and over, etching a very shallow path.

The gullies in the dark areas are those etched paths. The dark areas is the staining caused when the CO2 gas vents outward, carrying with it material from below. Their presence here means that the mantle has not yet all sublimated away. Once it is gone this discoloration will disappear.

One final and very curious but important detail about these spiders and their tributaries. Like rivers they start as many small flows that consolidate into larger rivers. Unlike rivers however — which flow downhill — these CO2 gas rivers flow uphill. The gas is searching for an exit to escape upward and out into the atmosphere.