Spring at the Martian South Pole 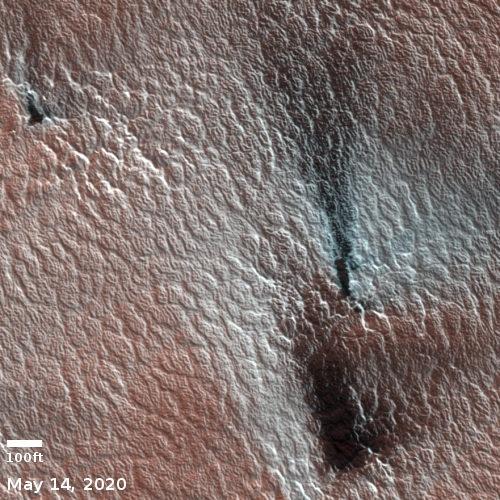 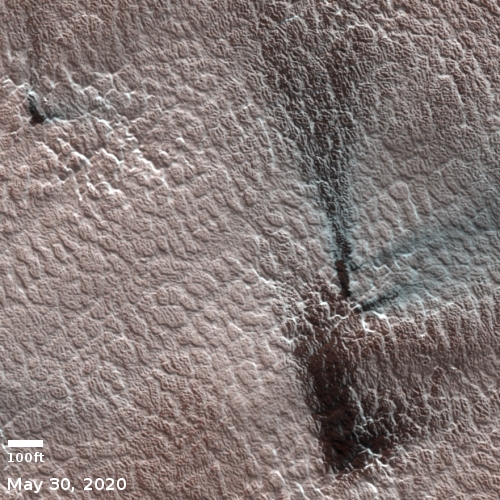 It is now full spring at the Martian south pole, and as should be expected much has been happening there. Like the Martian north pole, when sunlight arrives after the dark winter it hits the seasonally-placed mantle or cap of carbon dioxide snow and begins to melt it, in the alien ways things like this occur on Mars.

The two images to the right illustrate this process for one particular place located in what are called the south polar layered deposits. The two images, just released on July 1, 2020 from the high resolution camera on Mars Reconnaissance Orbiter (MRO) and taken on May 14 and May 30 respectively, had immediately caught my attention because they were labeled “Active Geyser Locale Dubbed Macclesfield.” Active geysers?! I immediately contacted Candy Hansen of the Planetary Science Institute in Tucson, Arizona, whom I correctly guessed had requested these photos. She explained,

The name for this site is of course informal, and it dates back to when I first started picking sites to monitor. I was so certain we would see active geysers here! We see their deposits, the fans on the surface, but so far we have not caught an actual eruption in progress.

The overview map of the south pole below provides some context. 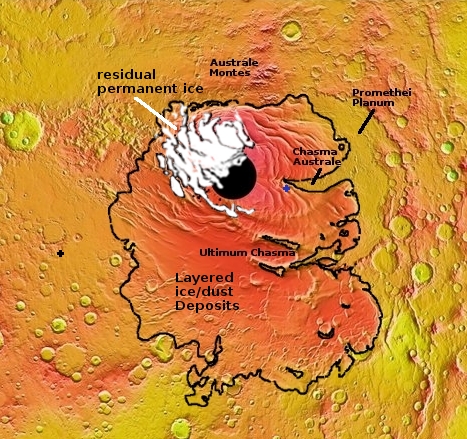 The location of these two images is indicated by the blue cross just to the south of Chasma Australe. The black line indicates the border of the south polar layered deposits, made of a mixture of ice and dust laid down in many layers.

Both the north and south poles of Mars have a permanent water ice cap, which each winter gets covered by a much larger cap of carbon dioxide dry ice that extends as far from the pole as latitude 60 degrees. It is this CO2 cap that astronomers on Earth have observed wax and wane since the 1800s.

Both polar caps however are different in some fundamental ways, as described in this paper [pdf]. The south cap is thought to be 7 to 15 million years older. While the permanent residual ice cap in the north is large and almost completely covers the layered deposits of ice/dust below it, in the south the permanent ice cap is much smaller and covers only a small portion of those layered deposits.

The south pole sits at a higher elevation, on the rougher cratered southern highlands. The north pole is in the middle of the smoother northern lowland plains, with many fewer craters. While the north pole is surrounded by a vast sea of dunes, the dunes in the south are generally confined to the interiors of craters.

Most importantly, according to the available data (still somewhat sketchy) the history of both icecaps is different and follows different timelines. Though scientists have proposed a number of scenarios describing the history of each polar ice cap, until we can get ice cores these theories are nothing more than educated guesses.

On smaller scales there are other differences between the poles. To understand these differences however we need to first understand what has happened over two weeks in the two images above.

When spring arrives at the south pole and the Sun hits that dry ice mantle a small percentage of the light shines through to begin heating the dirty permafrost base layer below. This causes the base of the dry ice to sublimate into a gas, which in turn they think actually lifts that CO2 mantle up slightly, until the gas pressure finds a weak point in the mantle to vent out. Thus, the possibility of a geyser, which when it bursts forth deposits some of the material from the permafrost layer below on top of the surrounding CO2 mantle, creating the dark and light fans.

In the second photo much of that dry ice mantle is gone, so the fans no longer stand out because they are pretty much the same color as that base permafrost layer. That they are still visible however tells us that some of the dry ice mantle still remains.

This is essentially the same process of venting and sublimation of that seasonal CO2 cap that occurs at the north pole. 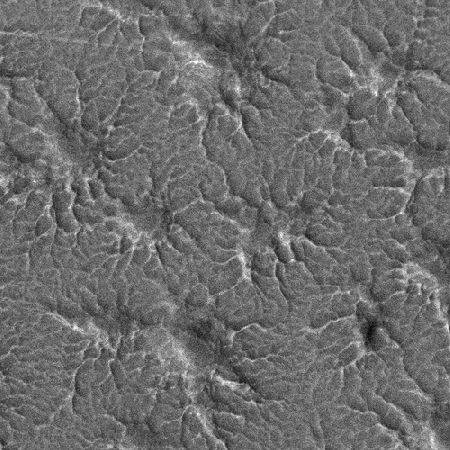 Now for the differences. At the north pole these vents generally occur either at the crest or base of the dunes in the vast Olympia Undae dune sea that surrounds the permanent ice cap, and don’t happen in the same places from year-to-year. The dunes are just not stable enough to maintain the erosion paths from season to season.

At the south pole however the vents frequently happen not at dunes but on either the layered ice/dirt deposits of permafrost or on solid but friable ground, both of which are more stable than sand dunes. Thus, over time the venting and the transport of that trapped gas occurs in the same places, over and over, etching a very shallow path, about three feet deep, that we see in the image to the right, informally called “spiders”, dendritic patterns caused by the trapped gas as it seeps along well-travelled seasonally paths to a central point, where it then vents. 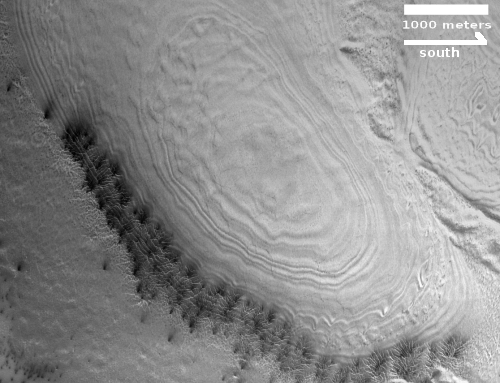 The image to the right is a good example of that sublimation process on ground further north, beyond the layered deposits. Its location is indicated by the black cross in the middle left of the map. Taken on March 26, 2020 and rotated, cropped, reduced, and darkened slightly to post here, it shows a bunch of spiders along the south-facing edge of this layered mound that forms part of the ejecta field surrounding a very large crater. The spring sun always hits that south-facing slope first, causing the CO2 gas vents to occur along the base of that slope, similar to the weak spots found at the base of dunes at the north pole.

Unlike the dunes, however, in this place those same exact vent locations have occurred repeatedly each Martian year, and with each year get etched more firmly into the terrain. If you look at the full resolution image you can clearly see its spiderlike pattern at the base and on that south-facing slope.

Similarly, while not obvious in the first two images above, a close look at full resolution reveals that same pattern of etched troughs. The topology here, though looking relatively flat, produces yearly vents at the same locations, because subtle variations in that topology always makes those locations the weakest spot.

Yet, despite a good knowledge about when and where these eruptions will occur, and multiple Martian years to try to catch one as it happens, they have so far failed to do so. As Hansen told me, “It really has been quite disappointing to me we haven’t actually managed to catch an eruption.” She suspects this failure is related to the estimated length of the eruptions, from ten minutes to as long as two hours. Since they cannot take two photos sooner than two hours apart (the length of MRO’s orbit), it is very likely that the event has come and gone each time. “We just kind of have to get awful lucky, and we just haven’t gotten that lucky yet,” Hansen explains.

The hunt will continue of course. This remote exploration of Mars from orbit has only begun, and will eventually graduate to actual landings of robots, to finally follow with humans, geology hammer in hand and equipment to drill ice cores. Then, the answers to many of the mysteries we now puzzle over will become clear.