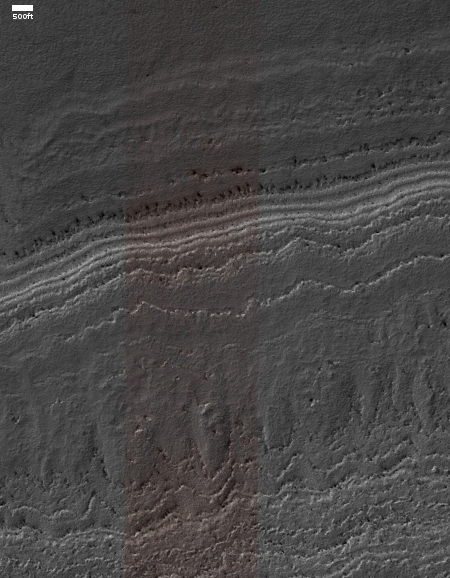 Cool image time! The photo to the right, rotated and cropped to post here, was taken by the high resolution camera on Mars Reconnaissance Orbiter (MRO) on April 10, 2020, and shows the edge of what scientists have dubbed Mars’s south polar layered deposits. The high point, towards the south, is at the bottom, and the terraced layers descend downward to the plains as you move up the image, to the north.

The map below provides the geography of the south pole, with the location of this image indicated by the blue cross. 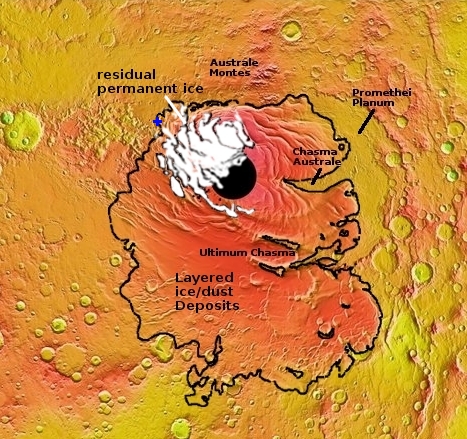 It is also worthwhile comparing this map to the map of the north pole that I provided in an earlier post. On large scales the differences outlined above are obvious.

That post focused on the edge of the north polar ice cap, so opening it in a second tab and comparing its cool image with today’s cool image is also very worthwhile. On small scales the differences are just as obvious. While the edge in the north is very steep and sudden, in the south the edge is much more gradual. Rather than a cliff, we are presented by a gradual series of terraces, each representing an older layer as you travel downward.

In the north pole cool image there appear to be many more layers, but that is because in the north they are all visible in one cliff edge. In the south the layers are exposed over a much more extensive area, much larger than can be captured in a single MRO photo. Today’s cool image only shows one small section of terraces, with many more to the south, beyond the bottom edge of this image and closer to the pole.

In the north the edge also included the many white layers of the residual cap of relatively pure ice, sitting on top of the layered deposits. In the south, in today’s image, we are quite far away from that residual ice cap, so its white layers are not present.

Essentially, the Martian poles are fundamentally different As I noted on July 8, 2020:

The south pole sits at a higher elevation, on the rougher cratered southern highlands. The north pole is in the middle of the smoother northern lowland plains, with many fewer craters. While the north pole is surrounded by a vast sea of dunes, the dunes in the south are generally confined to the interiors of craters.

Most importantly, while each visible layer in both the north and south pole images represents a unique past climate cycle on Mars, all probably caused by the swings in the planet’s obliquity (its rotational tilt relative to the Sun), scientists have not yet been able to match up the layers between the two caps. They therefore think that they could represent different timelines, a puzzling circumstance that remains unexplained.

In fact, to understand and align the histories of both caps, which will also help us lay out the entire history of Mars’ past climate cycles, we will simply need to drill cores in both places, in numerous spots.

Such work however is likely not to happen until humans are living on Mars and are walking its surface.