The flaking and cracked floor of a Martian crater
May 14, 2021 1:10 pm Robert Zimmerman 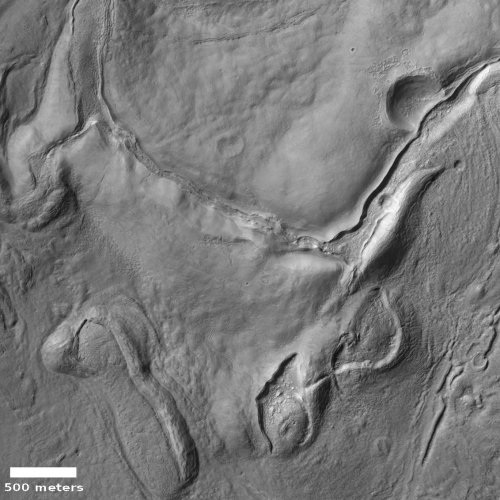 Cool image time! The photo to the right, cropped and reduced to post here, was taken on April 1, 2021 by the high resolution camera of Mars Reconnaissance Orbiter (MRO). It shows the central portion of the floor of an unnamed 5-mile-wide crater in northeast corner of Hellas Basin, the deepest large depression on Mars.

The latitude is 33 degrees south, where many glacier features have been identified, especially inside craters.

In this case, the cracked and flaked surface of this crater floor suggests what geologists call exfoliation, “the breaking off of thin concentric shells, sheets, scales, plates, and so on.” On Earth exfoliation generally refers to an erosion process seen on rock faces, though you can see it on other types of materials.

In this Martian crater we appear to be seeing the exfoliation of different ice layers, sublimating away at different rates as they are exposed to the Sun. The layers probably suggest different periods on Mars when snow was falling here, causing the glaciers to grow. The sublimation we see now suggest periods when this region was warmer and the ice was shrinking. Whether we are in such a period now is not yet determined by scientists.

Either way, the photo suggests at least two such cycles, though if we could drill down into this material we would likely find evidence of many more.

Below the fold is a global map of Mars, showing the location of this crater with a red cross in Hellas. The regions surrounded by white borders are areas where many glacial features have been found. 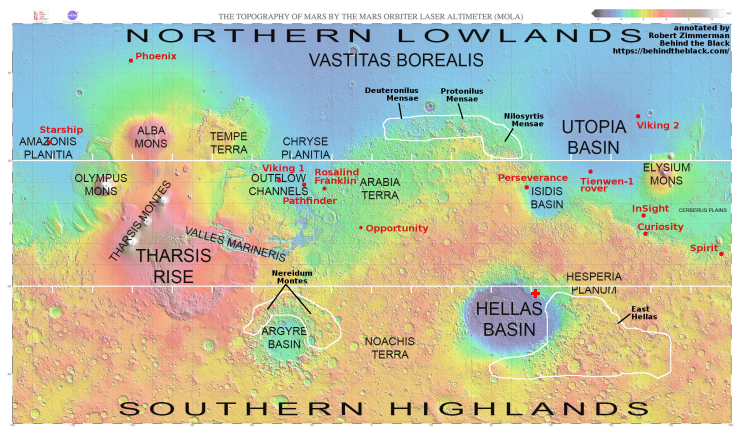 As you can see, this crater is both outside a nearby glacial region to the east, and also sits just south of the 30 degree latitude line north of which no such glacial features have so far been found. This feature thus either illustrates the process of glacial sublimation, or it is showing us material that is not glacial but possibly volcanic.

To my eye the features in this crater are too similar to other glacial features dubbed concentric crater fill and located throughout the 30 to 60 degree mid-latitude bands. If you look at the full image, showing the crater’s rim and most of the rest of the crater floor, you will see what I mean, especially if you compare this crater with other glacial-filled craters.