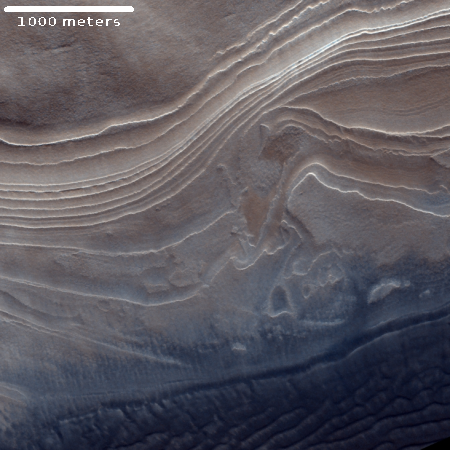 In the past month the science teams of both Mars Reconnaissance Orbiter (MRO) and Trace Gas Orbiter (TGO) have released images showing the strange layering found in Burroughs Crater, located near the Martian south pole.

The top image above is the MRO image, rotated and cropped to post here. To the right is a cropped and reduced section of the TGO image.

The ‘polar layered deposits’ of Mars, as the ice caps are known, are made of layers upon layers of ice and dust that record how the climate of Mars has evolved in the last few million to hundreds of millions of years.

Many of the impact craters that surround the caps have layered mounds that appear similar to the polar layered deposits, and some, particularly in the north, are known to be composed of nearly pure water ice. Layered mounds, like the one imaged here in Burroughs crater, lie close to the south polar deposits, and have been less studied than the layers of the caps.

They may represent remnant ice deposits from past climates when the extent of the polar layered deposits reached to lower latitudes, or they may have been deposited independently, which would mean that they represent an entirely separate record of climate – perhaps extending further back into the history of the Mars.

The geological processes that are taking place at the Martian poles are truly alien, and though a lot of research has been done, we really don’t know enough to really explain what we see with any confidence. For example, dating these layers is difficult. They might span a very long time frame, or not. Are the layers a regular occurrence, or more random? Are they related to Mars’s orbit, as Earth’s ice ages are, or was it the long term evolutionary changes to the Martian climate that are thought to have occurred that caused them?

In this sense the failure of Mars Polar Lander in December 1999 still hurts. It would have landed at almost the same latitude as Burroughs Crater, and would have provided scientists some solid information, on the ground. of the geological processes going on here. Because of that failure, which occurred just as the spacecraft began its descent into the Martian atmosphere, we still have no direct information about the geology near the poles.