Cool image time! Above is an image taken by the high resolution camera of Mars Reconnaissance Orbiter (MRO) in November 2018 of an area in the vast relatively featureless northern lowlands of Mars. I have rotated, cropped, and reduced it to post here.

While the northern lowlands seem featureless from a distance, with few craters, a closer look always reveals many things that are both baffling and fascinating. In this case the region is called Galaxias Colles, a region of mesas and knobby hills. This particular image was dubbed “Cones in Galaxias Colles,” and was clearly taken to get a better look at these strange blobby features. 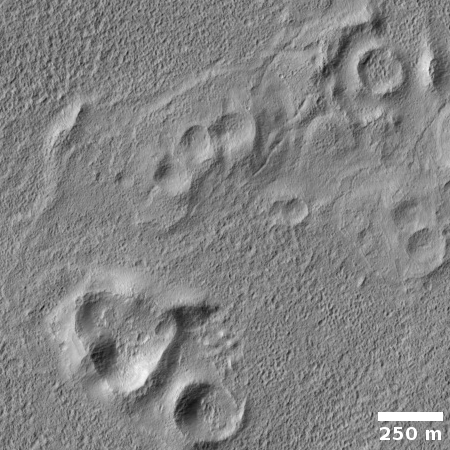 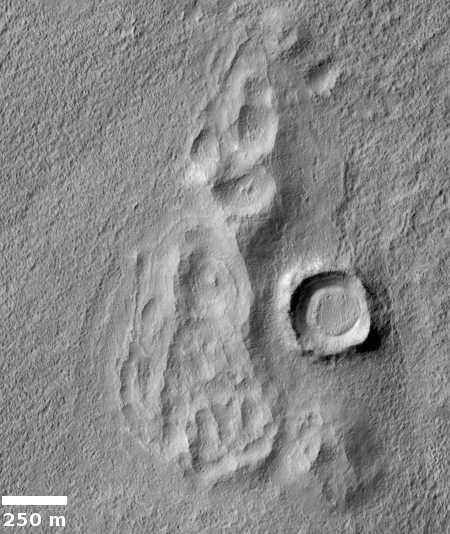 The first inset to the right, from the center of the image, shows a number of circular features that might be impact craters, but if so they are very indistinct, suggesting they have been eroded significantly.

These features could also be mud volcanoes, releasing material from below due to some geological process.

The second inset to the right, from the photograph’s left, highlights several even stranger and baffling features, the largest of which reminds me of the bare three-toed footprint of some giant. Here too the features look eroded.

It is thought that an intermittent ocean might have once covered these northern Martian lowlands. Moreover, the more north one travels on Mars the wetter the surface material is thought to be. Thus, there could be a lot of ice present here, either as an underground ice table or mixed into the soil.

To my untrained eye, all this makes me think I am looking at what was once the ocean floor of that intermittent ocean.

Don’t bet on it. According to this research paper, “Liquid water has not been regarded as a product of the degradation of these icy terrains.” Furthermore this location is only at 36 degrees north latitude. It is not that far north, and in fact it remains uncertain how much ice is present in the ground at this Martian latitude.

In their research the scientists are not even sure if the erosion we see here was caused by groundwater melting or heating by the arrival of lava from the giant volcano Elysium Mons to the immediate south. All they know for certain is that this terrain that has been significantly changed, meaning that its structure was weak and prone to easy erosion.

The result are geological features seen nowhere on Earth.