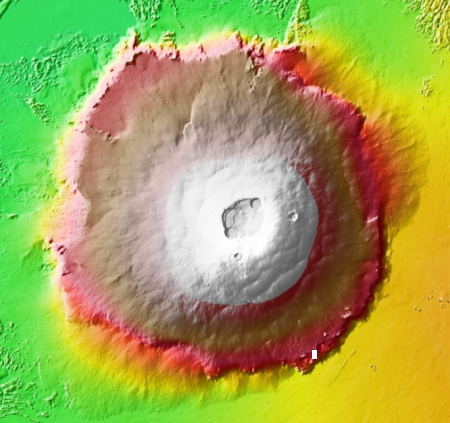 Today’s cool image starts from afar and zooms inward. The elevation map to the right shows Olympus Mons, the largest volcano on Mars and in fact the entire solar system. About 600 miles across, from the edge to its peak this volcano rises about 54,000 feet, with an actual height relative to Mars’ “sea level” of just under 70,000 feet, more than twice as high as Mount Everest on Earth.

The cross-section of this volcano is so large it would cover almost all of France if placed on Earth. As a shield volcano, it was formed by many many volcano flows that laid down many layers of lava, with some in its northwest quadrant thought to be as recent as 2 to 115 million years ago.

Our cool image today is located at the white rectangle at the southeast edge of this volcano, and illustrates how those many lava flows could create such a large shield volcano with such a large cross section. 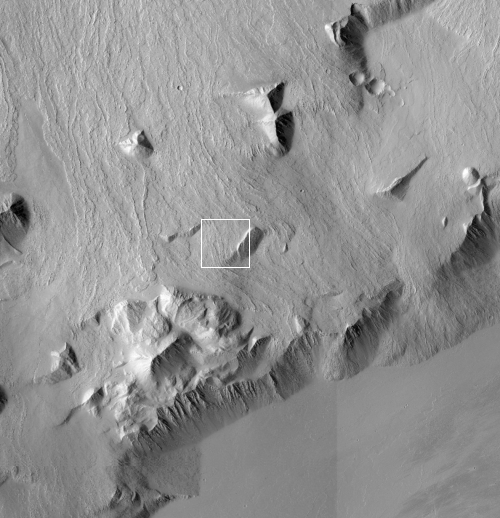 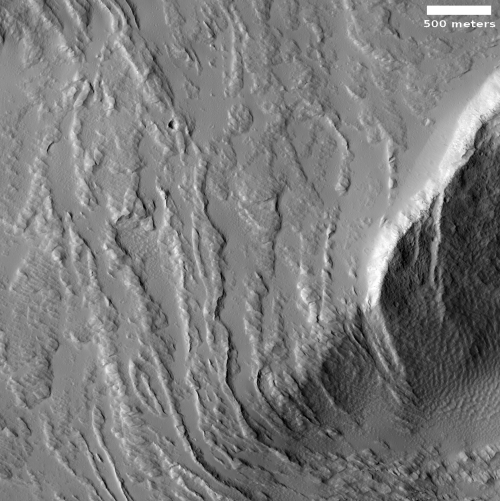 The first image to the right is a mosaic made from two context photos taken by Mars Reconnaissance Orbiter (MRO). Rotated to post here, it shows that sharp and very steep sudden edge of this giant volcano. If you look close on the plateau you can see what look like numerous flow lines going downhill to the south, all evidence of a past lava flow.

The white outline marks the location of the second photo, taken on March 4, 2021 by the high resolution camera on MRO and rotated, cropped, and reduced to post here. This image shows in close-up those flow lines as they draped themselves around higher ridges as they streamed downward.

The question that we Earthlings ask when we look at Olympus Mons is this: How was it possible for the gentle eruption of lava from the volcano’s caldera hundreds of miles away possibly reach the mountain’s edge as seen in these images? Lava on Earth might flow a few miles, even tens of miles, before solidifying. But hundreds of miles? It doesn’t seem possible.

But it is. This is Mars, with about 38% of the gravity of Earth. As I noted in an early post about one amazingly long lava river on Mars (as long as the Columbia River), molten lava on Mars can travel very large distances, and does so very quickly.

What built Olympus Mons was probably many eruptions, each of which was able to lay down very fast — possibly in only a matter of weeks — a new layer of lava that covered the volcano from the caldera to the very edge we see here. The curved flow around that ridgeline shows us the last bits of that fast flow before it finally stopped at the volcano’s steep, sudden, and sharp foothill edge.

Someday we will be able to drill into these layers, and very precisely date every major eruption, mapping out the volcanic history of Mars and how those eruptions affected the planet’s changing climate. Mars’ geological and climate history then will no longer be a puzzle, but an explanation for how one type of planet evolved over time.


Unfortunately, that is exactly where that journey takes him.
The vision that Zimmerman paints of vibrant human colonies on the Moon, Mars, the asteroids, and beyond, indomitably fighting the harsh lifeless environment of space to build new societies, captures perfectly the emerging space race we see today.
He also captures in Pioneer the heart of the human spirit, willing to push forward no matter the odds, no matter the cost. It is that spirit that will make the exploration of the heavens possible, forever, into the never-ending future.
Available everywhere for $3.99 (before discount) at amazon, Barnes & Noble, all ebook vendors, or direct from the ebook publisher, ebookit. And if you buy it from ebookit you don't support the big tech companies and I get a bigger cut much sooner.
9 comments