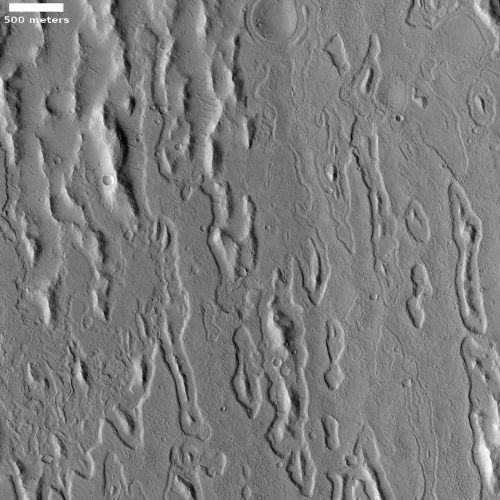 I’ve said it before and I’ll say it again. Mars is strange, Mars is wonderful, but above all, Mars is alien. Today’s cool image illustrates this saying quite nicely.

The photo to the right, cropped and reduced to post here, was taken on February 1, 2021 by the high resolution camera on Mars Reconnaissance Orbiter (MRO) and was simply labeled “Sacra Sulci Lava”. Sacra Sulci is a section of the Kasei Valles canyon that runs from the north rim of Valles Marineris north about 1,000 miles where it turns east for about 600 miles to drain out into the northern lowlands plains of Mars. Sacra Sulci is the region where that valley narrows and then turns east.

Apparently the flat smoother areas on the east and south on this image that rise about 60 feet above the surrounding terrain and that also seem to flow around mesas and into canyons are believed to be the edge of a massive lava flow that occurred about 150 to 200 million years ago and drained through Kasei Valles, just like water.

What makes this puzzling, however, is that everything I had read previously about Kasei Valles said that it was thought to have been formed from catastrophic floods of water on early Mars, when the planet was warmer and wetter. In fact, I had posted previously about this theory, and included the map below, taken from figure 8 of this paper [pdf], showing part of the process that some scientists believe occurred. 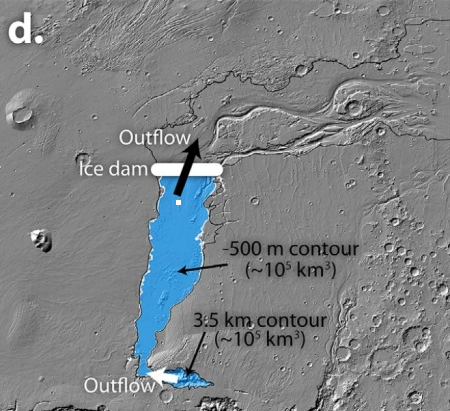 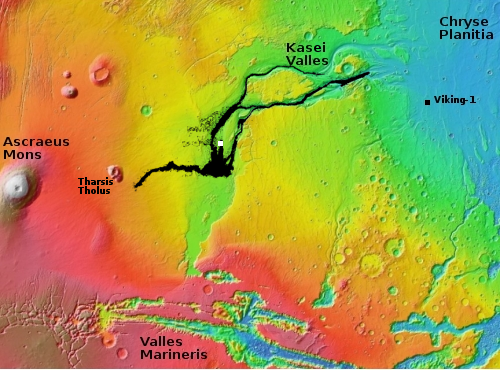 As I noted in that October 2020 post, entitled “Was there a catastrophic flood in Kasei Valles on Mars?”:

The downstream west-east section shown in the map instead appears to have been formed by a sudden catastrophic flood [of water], which some scientists have theorized [pdf] occurred when a three hundred long ice dam broke suddenly, releasing the flood quickly across this terrain to create its features.

So why was the particular image above, located smack dab in the middle of this hypothesized lake of water (as indicated by the white dot), labeled lava? Was it lava, not water, that carved Kasei Valles?

Further research located two papers (here and here) that gave the answer, with the first paper providing a full map of that lava flow that I have superimposed in black on the second overview map to the right. Mapping of this lava has found that it ran out from the region near the volcano Tharsis Tholus (though the source is buried by later lava flows and has not been identified) and drained into the Kasei Valley, where it then followed those already created channels down to the northern lowlands, traveling as liquid lava about 1,400 miles, about the same as the Columbia River in the northwest United States.

Think about that: A river of lava capable of flowing that distance without freezing. I asked Colin Dundas of the U.S. Geological Survey’s Astrogeology Science Center in Arizona, who also was the lead author on those last two papers, how this was even possible.

It’s essentially because they were very thick and moved very fast. An insulating layer of rubble on top of the flow also helps.

The lower gravity of Mars, about 38% Earth’s, probably contributed as well.

In fact, the scientists estimate that the average speed of these flows was between 10 and 20 miles per hour, with peak speeds sometimes as much as 45 miles per hour. That is somewhat comparable to the speed of the tsunami flows as they worked their way across the Japanese landscape after the big 2011 earthquake.

This particular lava flow itself however did not do much to change the channels and canyons of the Kasei Valley, which had been carved long before by those theorized catastrophic floods of water that had occurred repeatedly from one to three billion years earlier and were interspersed with other now buried lava flows. While this most recent lava caused some erosion of cliff edges where lava falls occurred, the only significant change created by the lava was to raise the valley’s floor slightly, placing additional layers of material there as it hardened on its long journey. As Dundas explained,

These very large lava flows only had minor effects on the overall shape of Kasei Valles. The Valles as a whole must have been carved by even larger earlier events. The general view is that those were catastrophic water floods but there have been suggestions of extreme lava eruptions early in Mars’ history.

This particular river of lava was also relatively short-lived. Like the Athabasca lava flood on the other side of Mars that is also the planet’s most recent known lava event, the lava flow down the Kasei valley likely lasted no more than several weeks or months, though estimating its precise lifespan is presently difficult with the data available.

Regardless, for a very short time the Kasei Valley on Mars was a river of molten lava almost 1,400 miles long. On Earth such things do not happen.

As I said, Mars is strange. Mars is wonderful. But above all, Mars is alien.