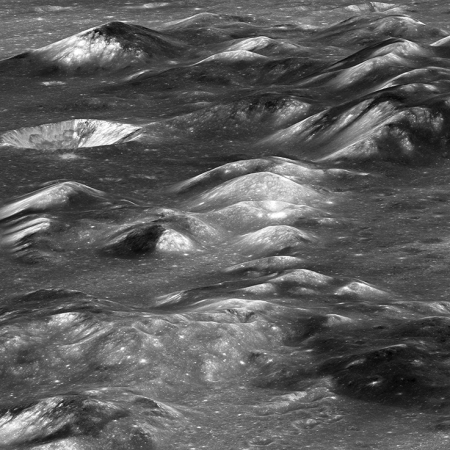 In celebration of Apollo 11: Continuing the theme of yesterday’s cool image, where I noted how little of the Moon we have really seen, today’s cool image gives us a breath-taking glimpse of one such untouched region, the Montes Carpatus region.

The photograph to the right, reduced to post here, was released by the Lunar Reconnaissance Orbiter (LRO) science team in March 2018. From the release:

Volcanic rocks are our best window to the deep interior of the Moon, and the Montes Carpatus has no shortage of volcanic landforms: lava flows, pyroclatic deposits, rilles, and more! Lavas are formed as the mantle begins to melt, so by sampling volcanic rocks of various ages from regions across the Moon scientists can reconstruct the range of compositions and processes over time. The Montes Carpatus formed as a result of the giant impact that formed the mighty Imbrium basin, the mountains are actually the raised rim of the basin.

Today is the 50th anniversary of the Apollo 11 landing. If you had told anyone involved in that mission that fifty years later no significant further manned exploration of the Moon had yet occurred, they would have scoffed.

It is a terrible condemnation of my generation, the generation that followed Apollo 11, that we did nothing grand like this. I challenge the generations today to reach higher, and do better.