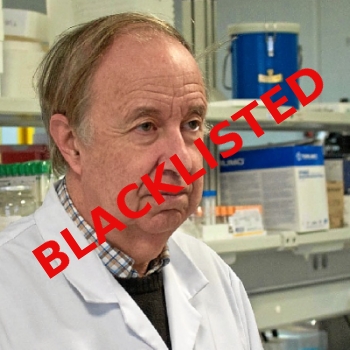 The modern dark age: Dr. José Luis Domingo, an often cited expert on toxicology and editor for the last seven years of the journal Food and Chemical Toxicology, has been forced to resign his position because of threats and slanders directed at him after he approved the publication of a peer-review paper that documented the potential harmful effects of the mRNA COVID shots.

About a month after the paper was published, Domingo said, he began receiving angry emails and messages. These included insults, calls to resign, demands to retract the paper, and even threats. One email asked him how he could sleep at night, knowing that the scientific paper that he had allowed to be published would lead to the death of millions of people.

The angry messages, he said, were filled with ad hominem attacks against him and against the paper’s co-authors, but did not specify their scientific objections to the contents of the paper.

…Since then, pro-vaccine factions have increased their personal campaign against him, going so far as to adding false information to the Wikipedia entry about him, as well as attacking the Wikipedia page of the journal itself. Both, he said, were negatively modified by pro-vaccination activists. Indeed, an Oct. 4 version of his page, accessed via internet archive, included a subheading entitled “Antivaccine controversy” that accused Domingo of “spreading disinformation during the pandemic.” That paragraph has since been removed.

Domingo even offered — in a gesture of open-mindedness and good will — to publish one of the more-detailed attack messages, if the writers would agree to peer review. They did agree, and then discovered that with peer-review you need to have some facts to back up your accusations. They did not, and their paper was rejected.

No matter. These individuals then found another journal, Stem Cell Reviews and Reports, to publish their attack essay, demanding once again that Domingo retract the paper while once again accusing him of causing the death of millions by its publication:

In their abstract, the scientists insist that “The need for more scientific integrity is at the heart of our advocacy.” They describe the Seneff et. al. paper as “deadly disinformation.” The authors of the rebuttal contend that they have made a “militant choice” to demand retraction because the issue is “not a scientific controversy, but a matter of public health.” They further state that fighting against scientific disinformation “may be risky, too slow and insufficient.”

They end their militant call for retraction with a quote from Joseph Biden, president of the United States, that “the only pandemic we have is among the unvaccinated; and they’re killing people” (which they emphasize by placing in italics [here in bold]) and say that this quote “applies especially to the people who encourage the unvaccinated’s beliefs.”

No citation accompanies the contention that there is currently a pandemic of the unvaccinated. That statement is not scientific. It cannot be cited because it is not true. Most of the recent research shows that the vaccines do not stop the transmission of COVID-19 and that the majority of deaths and hospitalizations from COVID-19 are in those who have been vaccinated.

If you read the original paper that Domingo published, and compare it with this attack piece, you will see immediately the difference. The first is detailed, fact-based, and thoughtful. It raises questions, and questions assumptions, as any good scientific paper should do.

The second however is entirely political in nature, in a so-called scientific journal. It cites no data to counter the first paper, merely claims that it is wrong, and that no one agrees with it. Or to put their position more clearly, “The jab is supposed to work! We don’t care what the data says!”

In the end, Domingo decided he could no longer remain as editor of Food and Chemical Toxicology and resigned. Apparently he was being pressured by the journal’s publisher, possibly to bow down to his attackers and retract the paper. He would not do this. Furthermore, it appears the campaign of slanders against him was threatening his own scientific work.

Thus, the mob and the bullies win, and the unwavering search for truth, the most fundamental principle of all science, gets crushed once again.

The greatest irony of this entire story is that Domingo himself has been jabbed three different times, and still came down with COVID. Without any effort on his part, his own medical history proves how bogus the claims of his attackers are.