Today’s blacklisted American: Cancelled by his bank for being pro-life, he started his own
September 1, 2021 12:10 pm Robert Zimmerman 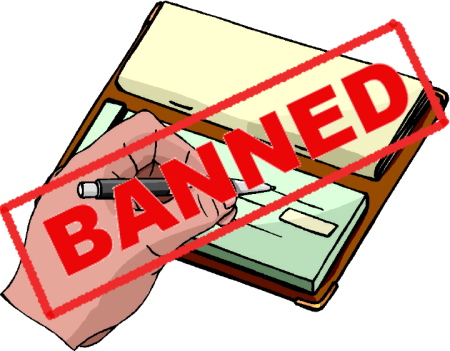 What too many banks want to do to conservatives.

Today’s story is similar to my blacklist story two days ago about former national security advisor Michael Flynn [See the bottom of this post for an update on the Flynn story!]

Just as Flynn was blackballed by Chase bank, evangelist and motivational speaker Nick Vujicic found himself frozen out by his own bank because of his Christian, political, and pro-life beliefs.

Vujicic said he began to speak out against the innocent killing of unborn babies in March 2019. Within 16 weeks of doing that, he revealed, “we had a grenade at our house, a false magazine article published against me, a lawsuit threat, a spying drone, and a bank kicked me out.”

…”I got kicked out of a bank with no warning. They froze my credit cards, froze my debit cards,” he said. “They gave me a letter to say that they did a review of me as a client and they don’t want anything to do with me.”

What makes this story different from the Flynn story is that Vujicic responded by starting a project to found his own bank.

We want to tell everyone, yeah, there’s a choice coming for you,” Vujicic said. “And not only will this be a for-profit bank, we are actually known as a for-giving bank. We will not fund abortion, but we’ll actually fund 50 percent net profits to Judeo-Christian-aligned nonprofit organizations that are biblically aligned in doing the will of God according to our belief systems.” Vujicic said with this initiative, he is hoping to share a positive message about protecting the sanctity of life at all stages.

The bank is not yet operational, so I don’t know if it will ever really exist. Nonetheless, Vujicic’s action is the one of several that can be taken against the repressive left that is taking over our society and imposing its will by force and blacklisting. Create a viable alternative to their power structure.

Another option is to take them to court. Most of examples of blackballing by businesses that I have listed in my daily blacklisting column are likely illegal under many anti-discriminatory laws. If enough people make them pay in court they will back down.

There is a third option, but it appears that Vujicic’s Christianity prevents its use. He apparently has never named the bank that blacklisted him, which is a shame as it denies others that third option, to take their business elsewhere. His attitude is to try to take a positive step, rather than a negative one. Rather than destroy the old bank he wants to create a new one.

Right now unfortunately such idealism is no longer acceptable. To fight these brownshirts will require hitting them on all cylinders, in every way possible. 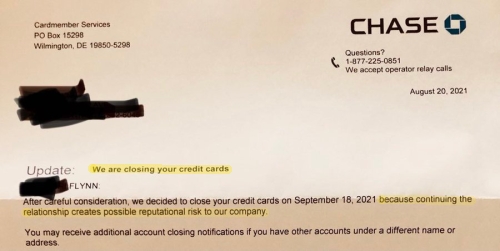 UPDATE on Chase Bank’s blacklisting of Michael Flynn: Chase Bank has now apologized for its letter shuttering Flynn’s credit card accounts, claiming “we made an error.”

As I said in my original post, hogwash. They made no error. Just look at the letter to the right that they sent to Flynn. This was intentional and deliberate.

They have only backtracked because they are feeling pain right now from customers screaming at them for this ugly action, and are trying to stem the damage. Too bad. All conservatives should still close their accounts at Chase, because I firmly believe they will do this again, to some one less famous than Flynn, as soon as the heat dies down.

For example, has Chase indicated in any way where the error came from? Who did it and why? Has anyone been disciplined for taking such an obvious political action against a conservative customer? Has the bank indicated publicly any corrective action it has taken to prevent this from happening in the future?

No, of course not. Like Twitter, YouTube, Google, and Facebook, they don’t want to fix the cause of these “errors,” since the errors are not a bug but a feature. They support these actions, want them to happen again, and only back down when faced with severe pressure.

I say, don’t give them the chance to do it again. Find someplace else to take your business. Now!