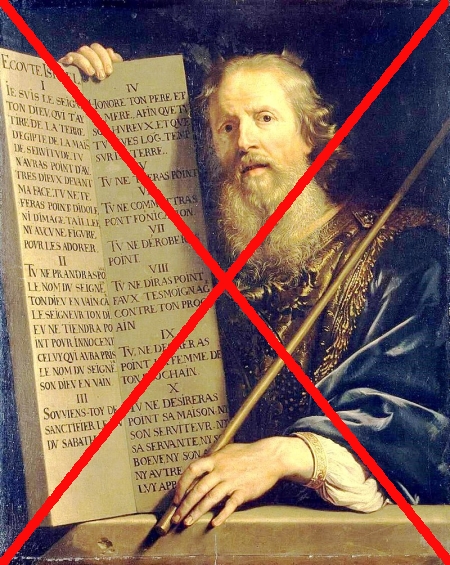 Moses: A Republican Party lobbyist, according to the IRS.

Blacklists are back and the IRS has got ’em! The IRS has denied a Christian nonprofit tax exempt status because it has deemed such “Bible teachings are typically affiliated with the [Republican Party]” and are therefore partisan.

From the IRS denial letter:

“Specifically, you educate Christians on what the Bible says in areas where they can be instrumental including the areas of sanctity of life, the definition of marriage, biblical justice, freedom of speech, defense, and borders and immigration, U.S. and Israel relations,” read a letter from IRS Exempt Organizations Director Stephen Martin to Christians Engaged, a nonprofit group seeking tax-exempt status. “The Bible teachings are typically affiliated with the [Republican Party] and candidates. This disqualifies you from exemption under IRC Section 501(c)(3).”

Heh. Well, at least the IRS has now admitted the satanic nature of the Democratic Party. According to this IRS official, only the Republican Party supports such biblical teachings as the ten commandments. The Democratic Party is opposed to this, which makes being Christian or Jewish a partisan political position.

Of course, the IRS itself is very partisan, as the article at the link notes:

Lea Patterson, who serves as counsel with First Liberty Institute, … pointed out that the IRS has allowed tax-exempt status for other similar organizations in the past, including a nonprofit group started by former first lady Michelle Obama called When We All Vote.

While Michelle Obama’s organization touts itself as working to encourage all people to vote, it is really a Democratic Party get-out-the-vote advocacy group. It focuses its effort in areas where the bulk of voters are Democrats, thus working to increase the vote for that party exclusively.

If this decision is allowed to stand, it means that almost all church groups will likely lose their tax exempt status. Their beliefs are certainly more aligned with the Republican Party and conservatives. The Democrats have made it very clear in the past decade that they oppose such ideas.

Moreover, this decision indicates that, as was done during the Obama administration , the IRS is now being weaponized as an outright Democratic Party operative, working to limit, hinder, and even shut down any organizations that might advocate positions favored by conservatives, while aiding in every way partisan Democratic Party allies.

None of this should be a surprise to anyone willing to pay attention to the actions of the Democratic Party for the past thirty years. Only recently have they been open and honest about it. They don’t want to do right, they want to obtain power, and will do whatever necessary to get it. And if you don’t believe me, consider the words of congressman Jamaal Bowman (D-New York) in pushing to get passed the Democrats most recent election bill (which by the way was defeated in the Senate) that was designed to put control of elections in the hands of the federal government and the bureaucrats in Washington (such as IRS hack Stephen Martin above). This is what Bowman said on CNN in advocating passage of the bill:

“If we deliver [this election bill], we maintain power in 2022. If we don’t and we show an inability to deliver, then we risk losing power and lose this moment in American history to really push a really progressive Democratic agenda..” [emphasis mine]

In other words, the Democrat election bill had nothing to do with establishing secure, valid, and trustworthy elections, but to insure insecure election rules that would allow the Democrats to cheat and thus guarantee victory.

As Bowman admits, they want power, and will do anything to get it, including squashing and destroying anyone who stands in their way. If you vote for Democrats, this is what you vote for, making you as much an intolerant power-hungry tyrant as them.