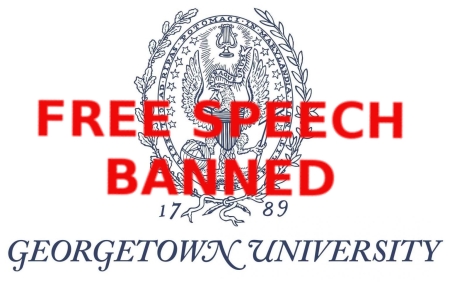 They’re coming for you next: Though Georgetown University announced last week that it had finally decided to reinstate Ilya Shapiro as a senior lecturer and executive director for the university’s Georgetown Center for the Constitution, Shapiro responded almost immediately by announcing his resignation from the job.

Shapiro had been suspended and under investigation for the past four months because of a single tweet he had issued criticizing President Biden’s decision to make race and gender more important than a judge’s legal qualifications in picking Ketanji Brown Jackson for the Supreme Court. For the background to this story see my May 13, 2002 post.

Although I celebrated my “technical victory” in the Wall Street Journal, further analysis shows that you’ve made it impossible for me to fulfill the duties of my appointed post.

You cleared me on a jurisdictional technicality, but the IDEAA Report [the 122-day investigation against Shapiro]—and your own statements to the Law Center community—implicitly repealed Georgetown’s vaunted Speech and Expression Policy and set me up for discipline the next time I transgress progressive orthodoxy.

You told me when we met last week that you want me to be successful in my new role and that you will “have my back.” But instead, you’ve painted a target on my back such that I could never do the job I was hired for, advancing the mission of the Center for the Constitution.

Many conservative press outlets have treated Shapiro’s resignation as a kind of victory, a call to arms and a refusal to bow to censorship. I see it as an utter defeat. Rather than stay at Georgetown and fight them, Shapiro ran from the battle. Without doubt had he stayed he would have soon been faced, as he predicted in his letter, with numerous mob attempts to silence him and get him fired, attacks that would have made his stay there at a minimum unpleasant and most likely untenable. And no doubt the Georgetown administration would have not supported him, but would have acted to confirm the mob’s slanders against him.

But had he stayed and fought, he would forced Treanor and the Georgetown University faculty to practice their blacklisting out in the open. They would have certainly tried to fire him eventually, but by making them do so Shapiro would accomplished something — revealing to the world that dictators run this university. His fight might have even have rallied the decent people at Georgetown to his flag, and possibly forced a positive change.

By resigning he has instead given the left a total victory at Georgetown University, without a fight. From now on there will be no diversity of thought at this close-minded college. You will either aggressively advocate for leftist and Marxist principles, or you will shut up to avoid getting removed. As Winston Churchill said in 1938, “The stations of uncensored expression are closing down; the lights are going out.”

In fact, the contrast between Churchill and Shapiro is quite revealing. Churchill never backed down and fought with every ounce of his “blood, toil, tears and sweat” for only one outcome, total victory. In the end his courage and determination brought the entire west with him, and made it possible for it to win World War II against the Nazis.

Shapiro instead has opted for an easy defeat in the face of evil. Under his kind of leadership there will be no triumph. The lights of freedom will truly go out, and very quickly.