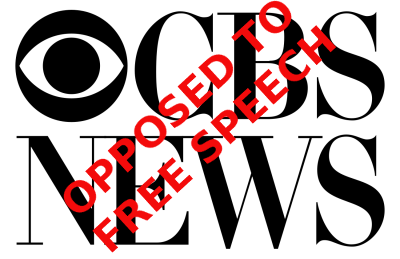 The new dark age of silencing: When the news division at CBS recently decided to hire Mick Mulvaney, a former Republican congressman and a former chief of staff for President Trump, there was a outraged revolt among the network’s news staff, demanding that the hiring be cancelled and that CBS blacklist all such partisan Republicans.

[Jeremy Barr, liberal Washington Post media reporter,] “obtained” a recording of a staff meeting led by CBS News co-president Neeraj Khemlani. Surely, the staffer recording this meeting was outraged that Khemlani said “getting access to both sides of the aisle is a priority because we know the Republicans are going to take over, most likely, in the midterms.”

Anonymous CBS News Democrats were alarmed “the network was jeopardizing its long history of journalistic excellence.” And you thought Dan Rather already did that.

“I know everyone I talked to today was embarrassed about the hiring,” said a CBS News employee who “spoke on the condition of anonymity because they were not authorized to comment.” This is the most ridiculous use of anonymous sourcing – to protect liberals while they publicly campaign against their bosses.

Others who demanded this Republican be blackballed included Steven Colbert and Washington Post columnist Margaret Sullivan. You read a lot more outrage from the press here.

Though a superficial look at the criticisms could fool you into thinking that the protests were specifically against Mulvaney, one must note that we don’t see a comparable stream of outrage when a major media outlet hires an equally questionable Democrat, such as the recent story that MSNBC was planning to hire White House press secretary Jen Psaki. Though some questioned the hiring, overall the press seemed unbothered by the hiring. A similar lack of outrage occurred when ABC hired Bill Clinton’s campaign strategist George Stephanopoulos. Stephanopoulos has always been a biased partisan news reporter, the kind that any legitimate news organization should hesitate giving an main anchor position. When ABC did this in 2002, there was little protest from the mainstream press corps, mainly because they like having Democratic Party advocates in powerful positions in the press. Makes it easier to justify their willingness to aggressively promote that party.

Routinely in recent years, the press working in mainstream media outlets have become completely intolerant of conservatives, and work hard to get them removed if hired, or blacklisted prior to hiring. The result has been a worse than useless mainstream press, now utterly devoted to campaigning for Democrats and their pet projects. The public gets no reasonable analysis on any issue, because there is no one left in these newsrooms allowed to question anything the Democrats propose or say.

Thus, if the Democrats begin slandering a reasonable state bill in Florida — designed to keep sexual matters out of classrooms for kids from kindergarten to the third grade — by falsely calling it a “Don’t Say Gay!” bill, the press immediately latches on, without ever actually reading the bill to find out what it actually does.

Meanwhile, the chorus of outrage and opposition whenever any Republican is considered for hiring continues to become more shrill and insistent. For the political desks of all mainstream media outlets, Republicans are increasingly blackballed, and forbidden work. The press thus becomes increasingly, day-by-day, a megaphone for the Democratic Party’s agenda, and nothing else.