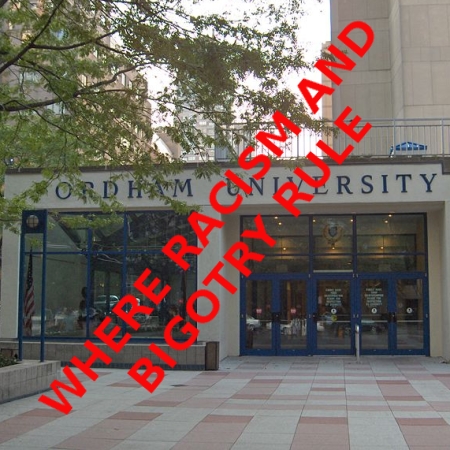 The new dark age of silencing: An English professor at Fordham University in New York, Christopher Trogan, was fired shortly after he made the unforgivable sin of accidently mixing up the names of two black students.

The name mix-up occurred on Sept. 24 in a Composition II class taught by Trogan. The two students whose names were mixed up sent Trogan an email after class expressing that they felt disheartened and disrespected, and believed the mistake occurred because they were both Black.

Later that day, Trogan sent an email addressing the situation to all of his students in both sections of his Composition II course. He referred to the name mix-up as an “innocent mistake” and said he had a “confused brain” because the two students arrived late while he was reading the work of another student at the lecturer podium. “The offended student assumed my mistake was because I confused that student with another Black student,” Trogan said in his email to students. “I have done my best to validate and reassure the offended student that I made a simple, human, error. It has nothing to do with race.”

One of the first-year students who was involved in the name mix-up incident said their experience in Trogan’s class prior to the incident was not great. The student, who asked to remain anonymous due to privacy concerns, told The Observer that Trogan repeatedly got their name incorrect over the course of four classes.

Chantel Sims, FCLC ’25, was the other student involved in the name mix-up. Sims, who is also a member of The Observer’s reporting team, said she did not report Trogan to the administration so she felt like a lot of his action and communication seemed unnecessary. “It seemed a little excessive, like all you needed to do was say sorry and it would have been fine,” she said. “We were not actually that upset about him mixing up our names. It was more so the random things he would throw into the response.”

In other words, of the two students, the one complaining the most has refused to be identified. The other student, Chantel Sims, concluded that the whole issue was being overblown, by Trogan himself.

When Trogan was dismissed, the administration claimed it was not the mix-up in names that was the cause, but Trogan’s overreaction and long email to his entire class.

All of this is absurd, and the result of an academic culture that gets too quickly outraged and offended about the smallest items. I am not surprised Trogan overreacted, because based on recent history any complaint against any professor by any black student for any reason can lead instantly to termination and firing. The black students are always assumed to be right, the accused always must be guilty, usually of racism. Trogan probably was terrified of this, and tried to nip such attacks in the bud. Instead, it appears he only added to his offenses.

In the email to students, Trogan assured students the course was “centered specifically and explicitly around issues of justice, equality, and inclusion,” and that he has devoted his “entire life” to these issues — describing his dedication to racial justice throughout his career in depth.

Sims said the section of the email that listed his credentials and “everything he has done for minorities” gave her the impression of a white savior complex.

This is the academic culture today, driven by fear and race. Don’t dare do anything that might offend a black student in any way. If you do, don’t dare apologize while citing your commitment to equal rights and justice for minorities because then you are a “white savior” and pushing your “white privilege.”

Trogan was caught between a rock and a hard place. No matter what he did, I suspect he was doomed, and would have been blacklisted by the university. He is now out of a job, and it appears he has few legal options because he was a recent hire who could be terminated for practically any reason.