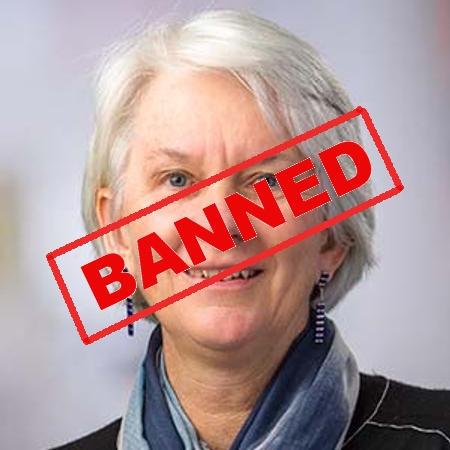 The new dark age of silencing: A renowned cancer researcher, virologist Julie Overbaugh, was forced out of positions at both the Fred Hutchinson Cancer Research Center and the University of Washington School of Medicine because thirteen years previously she had worn a Michael Jackson Halloween costume at a Hutchinson party themed around the singer’s Thriller album.

The accusations at Washington University were especially absurd, though horribly typical of today’s blacklisting culture:

Though the incident didn’t occur at UW Medicine, its CEO and equity officer also waded into the faux controversy. UW Medicine CEO Dr. Paul Ramsey and Chief Equity Officer Paula Houston notified UW Medicine staff in an email that Overbaugh was punished for engaging in the “racist, dehumanizing, and abhorrent act” of “blackface.” During a separate formal review process for UW faculty, the email confirmed, Overbaugh resigned from her UW affiliate faculty member appointment.

Overbaugh released a short statement to me. “I did not know the association of this with blackface at the time, in 2009, but understand the offense that is associated with this now,” she said. “I have apologized for this both publicly and privately and beyond that have no other comments.”

Ramsey and Houston claim that the UW Medicine community was “harmed” by the 13-year-old photo that most staff didn’t know existed until reading about it in the Feb. 25 email. “We acknowledge that our community has been harmed by this incident and the fact that 13 years elapsed before action was taken,” they wrote. “We are convening a series of affinity group meetings in the next few weeks to provide spaces for mutual support, reflection, and response.”

Neither Ramsey nor Houston explained how the photo “harmed” anyone. Indeed, beyond one confirmed complaint, it’s unclear if anyone even cared about the old photo. [emphasis mine]

These charges of racism are typical from today’s intolerant academia. The accusers claim that someone was “harmed” by whatever past crimes they can manufacture, without ever either naming anyone actually harmed, or the harm done to them.

Overbaugh’s quick surrender is equally tragic. She did nothing wrong, and yet she felt she had to apologize and step down from research and educational positions where she was doing real good. For example, in 2016 Overbaugh was honored for her HIV research as well as her work in Kenya mentoring young scientists.

Dr. Julie Overbaugh has devoted her professional career to studying viral pathogens that cause HIV. But amid publishing papers, running her own research lab, and flying back and forth from Kenya, she has also pursued another professional passion: mentoring.

Overbaugh is one of two recipients of this year’s Nature Award for Mentoring in Science, which is awarded to select scientists in one country or region each year. A researcher at Seattle’s Fred Hutchinson Cancer Research Center, Overbaugh was selected for the lifetime award from thousands of nominees on the West Coast of the U.S. A mid-career award also went to Susan L. Forsburg of the University of Southern California, and both awards carry a $10,000 cash prize.

…Overbaugh and her team at the Fred Hutch’s Overbaugh Lab are part of the Kenya Research Program, which investigates how HIV is transmitted and why some mothers do not transmit the disease to their children.

Over her career, Overbaugh has mentored dozens of young scientists. The nature of her work means many of her mentees are African scientists, like Dr. Bhavna Chohan, now a senior research scientist at the Kenya Medical Research Institute in Nairobi.

All this good work has now been thrown down the toilet, for nothing. Rather than encourage real researchers of quality, today’s research centers and university’s now consider on race and political correctness more important. Who cares if we cure AIDS? To hell with training scientists in third world nations! It is far more important that no one ever does anything that might offend the fragile woke psyche of Washington University’s Chief Equity Officer Paula Houston! (You can reach her here.)

Unfortunately, Overbaugh’s firing is sadly emblematic of today’s new dark age. In all things, from bankrupt academia to blacklists to stupid wars to brainless responses, our culture no longer has the ability to think. Instead, all actions are based on shallow emotions and what will look best on a Twitter feed.