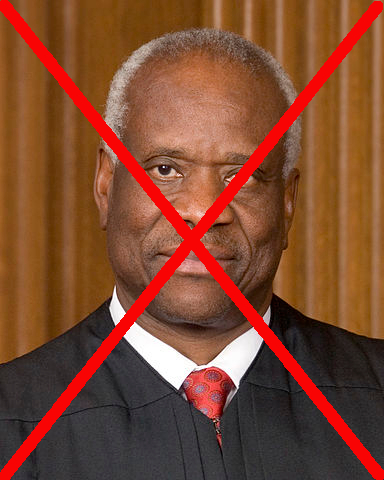 Blacklists are back and our future law students love ’em: Faced with a petition signed by 11,000 individuals demanding he be fired, Supreme Court Justice Thomas has resigned as a lecturer at George Washington University (GWU).

Thomas has been a lecturer at the school since 2011, but has now been removed as faculty from its website. His decision not to return to teaching comes in the wake of protests against conservative supreme court judges following the overturning of Roe v. Wade in June 2022.

The school was hit by a petition calling for the removal of Thomas, with more than 11,000 signatories. But George Washington University is home to just 1,600 students, and bosses there defended Thomas, insisting he was entitled to his views. [emphasis mine]

The highlighted words illustrate something significant: The bulk of the petition’s signers were not from George Washington University. However, though the school had apparently supported Thomas during this affair, we do not know how many of its 1,600 students signed the petition. What we do know is that there did not seem to be much public support for him from those students.

It is hard to fathom any law student not wanting to meet in person and hear the legal opinions of a Supreme Court justice, no matter where he or she stands on the political spectrum. To try to block such lectures reveals a shocking close-mindedness and hostility to rational thought. The language of the petition illustrates this, filled with false statements, ad hominen attacks, and complete intolerance of other points of view:

With the recent Supreme Court decision that has stripped the right to bodily autonomy of people with wombs, and with his explicit intention to further strip the rights of queer people and remove the ability for people to practice safe sex without fear of pregnancy, it is evident that the employment of Clarence Thomas at George Washington University is completely unacceptable. While also factoring in his wife’s part in the attempted coup in January of 2021, Judge Thomas is actively making life unsafe for thousands of students on our campus (not to mention thousands of campuses across the country). Make your voice heard and help us kick Clarence Thomas out of Foggy Bottom. [emphasis mine]

[Note: the petition now shows zero signatures, but a screen capture at the link from July 28th showed more than 11,000 signatures.]

The highlighted words exemplify perfectly this petition’s intellectual bankruptcy. So far the only lives who have been made unsafe have been conservatives, with leftist protesters nationwide firebombing their offices and threatening them with violent protests and assassination. Thomas’s support in turn of the recent ruling of the Supreme Court overthrowing Roe v. Wade has made no one’s life unsafe, as it merely required that the political decisions of the nation be decided by elected officials, not unelected judges.

Thus, this petition once again follows the left’s mantra that must be accepted without question: “Your speech is violence, my violence is speech.”

It has been Thomas’s history to strongly defy such thinking. He probably decided that if the law students at GWU didn’t have the courage to stand up to this kind of ignorant bullying, he didn’t need to waste his time trying to teach them. He also probably anticipated unruly mob protests during his lectures and decided the risks were too great, especially because of the increasing unchecked violence by the left.

It seems to me that if I was a sitting judge I would think twice about hiring any GWU law students as clerks. It appears these students aren’t really interested in learning or defending the law properly.