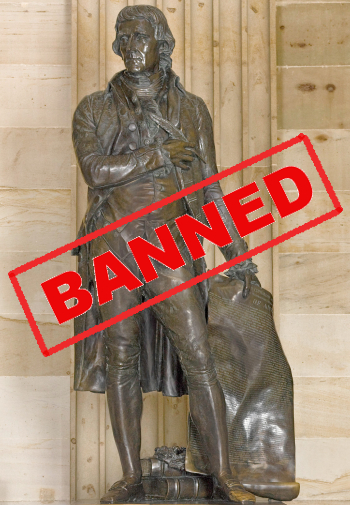 The modern dark age: Officials of Cleveland Metropolitan Schools have decided that its schools cannot be named after Thomas Jefferson and Patrick Henry because these great Americans — who trail-blazed the fight for individual freedom — had also owned slaves.

Guidelines implemented by the district last year with the urging of the Cleveland City Council require that schools not be named after people who have a documented history of enslaving other humans.

The district also prohibits naming schools for those who have actively participated in the institution of slavery, systemic racism, the oppression of people of color, women, or other minority groups, or who have been a member of a supremacist organization.

The two schools are now named after a black Democratic Party politician and a former school official. In our new dark age, these relatively minor individuals are now considered more important than two giants who made it possible to found the first country on Earth dedicated to freedom and individual liberty where the people were sovereign and the government was only their servant.

The renaming also including removing the name of Louis Agassiz from a third school. Agassiz was a prominent 19th century scientist whose work revolutionized the fields of geology and zoology. That he also harbored some racist beliefs is apparently now the only thing that matters (see Harvard University’s modern bio about him for example).

It must be emphasized that this leftist political movement to blacklist every great person from the past because they were not perfect human beings — by today’s standards — is not really aimed at curing racism or hate. On the contrary, its goal is to instill hate, an abiding hate of all past history, so firm and close-minded that the real facts about Western civilization’s great and noble past cannot be even considered or recognized.

And because Americans no longer have the gumption to defend that past, but continue to elect politicians whose goal is to destroy America, its history, and everything its stands for — such as the Cleveland City Council that demanded this action — this campaign to blackball history is succeeding. We might have a victory here and there, such as in San Francisco where the public threw out the school board that tried to do the same, but overall the war is on-going and the left is winning. In public schools the anti-American curriculums remain, pushed hard on children by the left’s minions of teachers. In only a few years, the indoctrinated children from those schools will reach adulthood, when they will make sure the left’s war is won, entirely.

We shall then see books burn, libraries ransacked, and the past nullified. The dark age, aborn now, will be in full force, for generations to come.

The entire house needs to be swept clean

There still is a very slim chance we can head off this disaster, but it will require a firm resolve to fire the entire leftist governmental educational bureaucracy that is promoting it, from voting out such politicians to cutting the budgets of school districts.

Merely banning the teaching of such Marxist programs like Critical Race Theory will not work. Tennessee’s legislature did that, and school officials and teachers are flagrantly ignoring the law.

What they were doing is now illegal.

Marion County’s Kimberly Shurett was a bit more sly, merely admitting that “It’s not actively being taught but it’s not actively not being taught.” “We’re business as usual in this district. … we don’t really let anybody tell us what to do,” she said.

Do Americans have the resolve to do a clean sweep? I have my doubts, especially because many Americans today have already been indoctrinated to these poisonous and mendacious ideas. They welcome the banning of Thomas Jefferson, and truly believe falsely that America is the source of the world’s evils. Fighting that already present crowd requires a resolve and courage that appears lacking in too many Americans.

The answer to this question will come in November. The elections then will likely tell us whether my now reluctant pessimism will win out, or whether my past natural optimism, now mostly gone, will triumph.