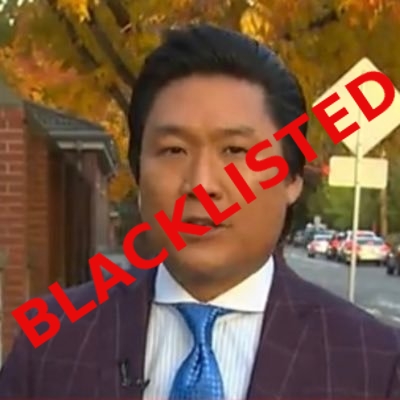 Johathan Choe, blacklisted for being a good reporter

The new dark age of silencing: A television reporter for the ABC affiliate in Seattle, KOMO, Jonathan Choe, was fired after he had covered, as accurately as possible, a peaceful Proud Boys demonstration in Seattle, including a photo montage of the event.

Choe, a reporter of 20 years, created a photo montage with sound from the march to end his day. In the clips, he included music from the rally that included a song called “We’ll Have Our Home Again.” Although Choe was unfamiliar with the tune, it is allegedly played frequently at Proud Boys rallies and similar gatherings.

“I wanted to simply capture a moment in time, with authentic visuals and sounds. It was clearly misinterpreted by some on-line,” Choe wrote.

Because of the uproar, Choe said his news director told him to take down all his social media related to the Proud Boys rally. He did so, but was fired the following day, he said.

By his own response to his firing Choe reveals that he himself buys into the racist, anti-American propaganda of today’s left, focusing much of his commentary on his race (he is Asian-American) and noting that though he has been a successfully journalist “for more than 20 years,” he has somehow “faced years of discrimination for my race and ethnicity.” The willful blindness of these statements is astonishing. How could Choe get a great job for a major television affiliate reporting the news if he was living in such a terrible bigoted nation (which by the way has recently twice elected a black man as president)?

No matter. He tried to do his job well and fairly, and a Twitter mob immediately descended upon him. His boss then cowered in fear, forcing Choe to first censor his work, and then firing him because the only thing that will satisfy a lynch mob is a lynching.

Of course, the lynching is not enough. When a mob senses blood, it only grows in force and anger. Don’t expect this news station to ever again cover any news about politics fairly ever again. For example, during the worst Antifa riots in Seattle, Choe had attempted to cover the violence and hate within those organizations accurately.

At KOMO, I spent a lot of time the past two years covering Antifa violence and destruction in the city. According to the ADL, “Antifa’s professed purpose is to vigorously oppose fascism. While some extreme actors who claim to be affiliated with Antifa do engage in violence or vandalism at rallies and events.” But during my time at KOMO, we still covered them even though some of these bad actors espoused hate and followed through with violence and destruction, including flag burnings and Molotov cocktail attacks on the Seattle Police Department’s East Precinct and union headquarters.

I have also been assaulted by alt-left activists who claimed to be part of Antifa. Many adherents openly talk about destabilizing America and bringing a socialist revolution. Some also proudly say they want to kill police. One young man who aligned himself with this ideology was just convicted of smashing an SPD officer in the head with a bat.

Don’t expect this ABC News affiliate to ever again allow its reporters to cover any Antifa or Proud Boys demonstration honestly ever again, as Choe had done. From now on, Antifa’s riots will either be “just,” “peaceful,” or ignored, while protests by the Proud Boys will either be “racist,” “violent,” or ignored. The affiliate’s news director has made it clear to his staff that is how he wants it.

Choe meanwhile has a choice. He can kow-tow and get another job with some other mainstream television outlet, where he will certainly be required to similar leftist censorship rules, or he can do what other former mainstream reporters have done after getting fired (such as Sharyl Attkisson, Sarah Carter, and Emerald Robinson) and start his own webpage and begin making money as a journalist independent of the leftist goons who run the networks.

The latter choice would be the smart one, as there is a strong public need for good honest journalism. And when there is a need, there is opportunity. Seattle could use a good and independent reporter covering its local political news. Choe should take up the banner and provide that service. His income might drop, but he certainly can make a living doing this, and it would be far more honorable than brown-nosing a mainstream news director at another television affiliate.