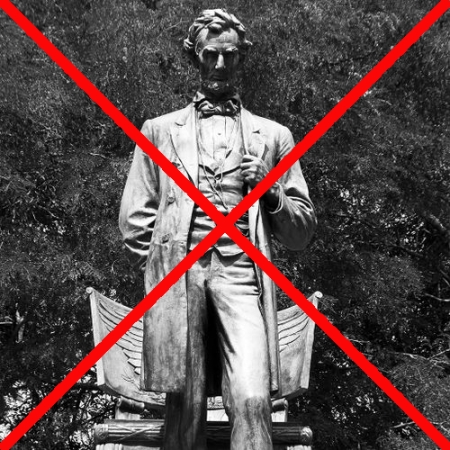 Blacklists are back and the Democrats got ’em: Lori Lightfoot, the Democratic Party mayor of Chicago, has begun the formal process for removing forty historical monuments in Chicago, including statues of Abraham Lincoln, George Washington, and Ulysses S. Grant.

Her reasons for throwing these fundamental Americans into the scrap heap of history? Well, she created a committee to review 500 monuments in Chicago and ended up deciding that 40 should go. It has said this:

Reasons for making the list include promoting narratives of white supremacy; presenting an inaccurate or demeaning portrayal of Native Americans; celebrating people with connections to slavery, genocide or racist acts; or “presenting selective, over-simplified, one-sided views of history.”

…Besides five statutes of Lincoln, others on the list include the General John Logan Monument in Grant Park; the General Philip Henry Sheridan Monument at Belmont and Lake Shore Drive; a statue of Benjamin Franklin in Lincoln Park; the Haymarket Riot Monument/ Police Memorial at 1300 W. Jackson Blvd; the Italo Balbo Monument in Burnham Park; and the Jean Baptiste Beaubien plaque at the Chicago Cultural Center. [emphasis mine]

You can see the full list of monuments here. It also includes monuments to George Washington, Christopher Columbus, and numerous other significant artistic works that also memorialized important historic events in the founding of America and Chicago.

This effort is nothing more than an attempt to slander and cancel all American history. No one should learn anything about it, and if they do, the only components that matter are the bad ones.

Fortunately, there appear to be some members of Chicago’s city council who don’t wish to go along with this effort, at least not without their say. Yesterday one councilman introduced an ordinance that will prohibit the removal of any monument without council approval.

This ordinance however has not yet passed, and even if it does, the Democrats control Chicago’s city council fully, and have for decades. I guarantee that this council will rubber stamp most of the recommendations of Lightfoot’s committee, allowing the destruction of many monuments while saving a handful as a face-saving gesture.

The end result will be that future generations will either be ignorant of American history, or will believe a cartoon version which claims American was entirely made up of evil people whose only goal was to enslave and oppress minorities. And if you don’t believe me consider this: When asked, a majority of freshman college students falsely believe that slavery was invented by the United States, rather than the truth that it was this country that created the abolitionist movement to end slavery.

Pesta said he believes these students were given an overwhelmingly negative view of American history in high school, perpetuated by scholars such as Howard Zinn in “A People’s History of the United States,” a frequently assigned textbook.

What’s more, he began to observe a shift in his students’ quiz responses in the early 2000s. Before that time, Pesta described his students as “often historically ignorant, but not politicized.” Since the early 2000s, Pesta has found that “many students come to college preprogrammed in certain ways.”

“They cannot tell you many historical facts or relate anything meaningful about historical biographies, but they are, however, stridently vocal about the corrupt nature of the Republic, about the wickedness of the founding fathers, and about the evils of free markets,” Pesta said. “Most alarmingly, they know nothing about the fraught history of Marxist ideology and communist governments over the last century, but often reductively define socialism as ‘fairness.’”

Chicago’s leftist politicians really have no problem with this anti-American perspective. They simply need their face-saving ordinance to dress it up, for now, in case some people with actual knowledge about the past challenge them.

But then, these are only monuments. Who cares? It isn’t as if they are going about blackballing real people, is it?

And they have this terrible power to destroy because ordinary Americans have re-elected them, over and over again, even though they have been signaling this intolerance blatantly for decades. They are now ready to make the last moves so that no future elections can ever remove them, out of an intolerant bigoted desire to cancel and destroy whatever they don’t like, human or historical, now and forever.