Typical but still mysterious gullies in a crater on Mars
May 19, 2021 1:40 pm Robert Zimmerman 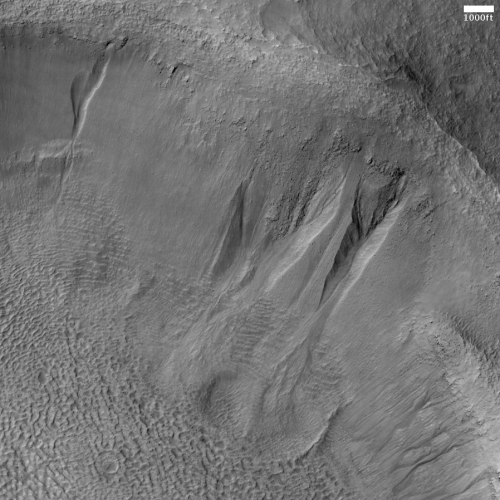 Today’s cool image to the right, cropped and reduced to post here, is of a crater in the mid-latitudes of Mars’s cratered southern highlands. The picture was taken on January 4, 2021 by the high resolution camera on Mars Reconnaissance Orbiter (MRO), and is actually the only high resolution image ever taken of this crater.

The gullies in the north interior wall of this crater are the reason why this picture was snapped. These gullies are very typical on the pole-facing slopes of mid-latitude Martian craters, and have puzzled scientists since they were first discovered in the late 1990s in images taken by Mars Global Surveyor. Since then, thousands have been found, almost all of which in the 30 to 60 degree mid-latitude bands where glacial features are also found. Most occur on the more shadowed pole-facing interior slopes of the craters, though at higher latitudes they are also found facing the equator.

Since their discovery scientists have puzzled over their cause, which because of their locations favoring colder temperatures suggest some form of seasonal weather factor. The most preferred hypotheses propose some interaction with water ice or dry ice, or are simply dry flows of rocky granular material. None of these hypotheses have been confirmed. Some evidence suggests they are dry flows, no water involved. Other evidence points to the influence of an underground layer of water ice.

The mystery of these gullies is enhanced by by the wider view from MRO’s context camera below, rotated and cropped to post here.

First, the largest gullies in this crater, as seen in the high resolution image, all suggest a sudden release of material that as it washed down it poured over what appears to be a crater floor covered with buried and eroding glacial material. Yet, it also is quite possible that despite their appearance these gullies did not form in a single sudden event, but slowly over time as many tiny events that accumulated their debris at their base.

The subject crater in the context image to the right is at the top. Note the randomly shaped hollows to the crater’s south. What caused them? Are they evidence of a layered terrain where the upper layers have eroded away haphazardly in some places? Could it be that there are ice layers below the ground here that not only cause the gullies but are also indicated by the wide flat canyons to the south?

Yet, if you look at the full context image you will see that to the north the terrain is instead flat and smooth, with no such shallow canyons. If there were underground ice layers here shouldn’t evidence of them be visible to the north as well? Or is this location a transition point?

Lots of questions and no answers. The real explanation for these gullies and the surrounding terrain will likely require a visit and some hands on analysis.

The one takeaway that favors the existence of underground ice at this location however is the preponderance of gullies in that those 30-60 degree mid-latitude glacial bands, as shown by the global map below, taken from this paper. 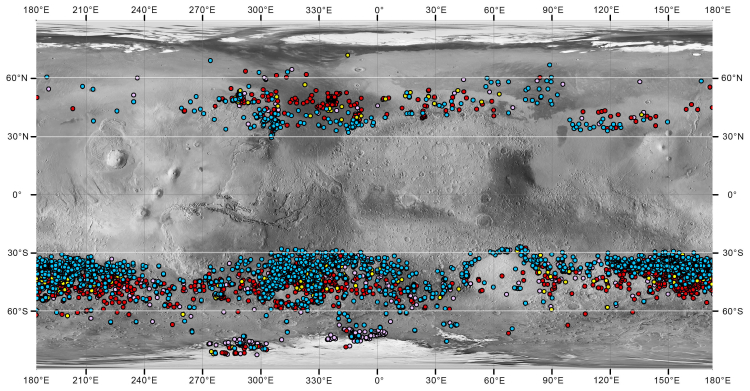 It is in these bands where there appears to be lots of evidence of glacial water ice very near the surface. It is thus quite reasonable for water ice to also exist near the surface but deeper down, in ice layers that form part of the terrain’s basic geology.

If so, the evidence continues to suggest that finding water on Mars will never be a big problem. Instead, the issue will simply be how to dig it up and process it so that it is potable.