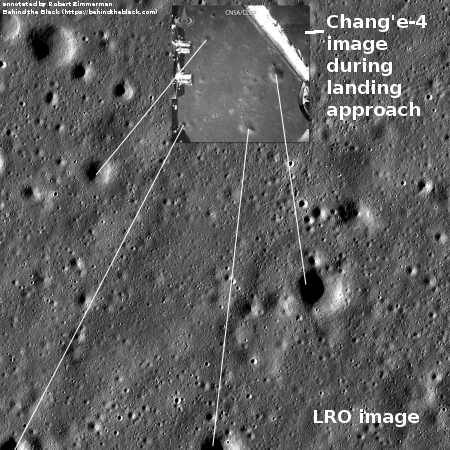 The Lunar Reconnaissance Orbiter (LRO) science team has released a high resolution image from 2010 pinpointing the area on the floor of Von Kármán crater where Chang’e-4 landed. On the right is a reduced and partly annotated version.

They have not actually found the lander/rover, since this image was taken long ago before Chang’e-4 arrived. However, this image, combined with the Chang’e-4 landing approach image, tells us where the lander approximately landed. It also pinpoints where to look for it when LRO is next able to image this region, around the end of January.

By then, Yutu-2 will hopefully have traveled some distance from Chang’e-4, and LRO will be able to spot both on the surface.