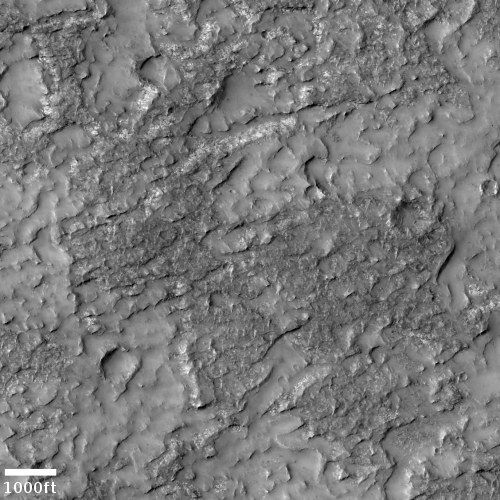 Cool image time! The photo to the right, cropped and reduced to post here, was taken on January 29, 2021 by the high resolution camera on Mars Reconnaissance Orbiter (MRO). It shows a particularly ugly region of rough terrain located about 900 miles to the southwest of the giant volcano Arsia Mons, the southernmost of the chain of three giant volcanoes between Olympus Mons and Valles Marineris. The picture sits inside the floor of a very old and degraded 185-mile-wide crater dubbed Koval’sky.

The section I cropped out was picked at random, because the entire full image looked like this. Though only a handful of images have been taken of the floor of Koval’sky Crater by MRO’s high resolution camera, all show similar rough terrain. In June 2017 the MRO science team posted one of those few such photos with the following caption:

This image shows partially exposed bedrock within the Koval’sky impact basin, which is on the outskirts of the extensive lava field of Daedalia Planum. Daedalia Planum is located southwest of Arsia Mons, which may be the source responsible for filling the crater with lava flows and ash deposits. 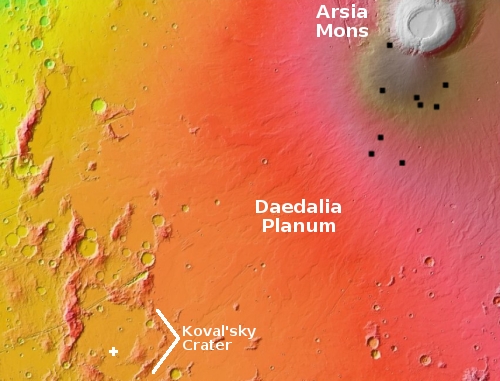 The overview map to the right gives the context. The white cross is where this cool image was taken. The black dots are locations where pits have been found.

The vast flows from Arsia Mons appear to have reached out almost a thousand miles to this 4-plus billion year old crater to flood its interior. Being so old, that volcanic plain inside this crater has since become very badly eroded, producing the rough badland terrain we see here.

Note also that though this is at 30 degrees south latitude, there is no evidence of any glacial or ice features. This appears to be an arid and dry place, similar in fact to the equatorial badlands I have previously highlighted several times on the other side of Mars in a region dubbed Tyrrhena Terra (see here, here, and here.) In fact, it is remarkable how much the first two examples in Tyrrhena resemble this picture in Koval’sky Crater.

The image was also another terrain sample, taken not to follow-up on any particular research but to fill a gap in MRO’s schedule in order to maintain the camera’s temperature. Because so few high resolution images have been taken inside this crater the science team probably decided to snap another to also help fill that topological gap.