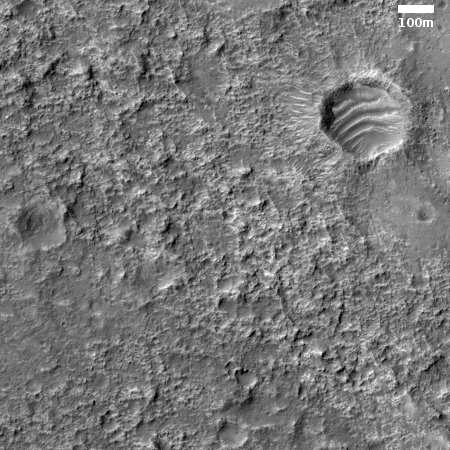 The photo to the right is a small section cropped from an image taken by the high resolution camera on Mars Reconnaissance Orbiter (MRO) on January 2, 2020. It shows the rough, cratered southern highlands dubbed Tyrrhena Terra that lie between the low Isidis Basin to the north and Mars’ deepest basin, Hellas, to the south.

The image was taken not because any specific scientific request, but because MRO was doing spectroscopy over this area and it made sense to also take a photograph. Comparing the photograph with the spectroscopic data allows scientists to better understand that spectroscopy.

The white cross in the map below shows the location of this image. The map itself covers latitudes from 40 degrees north to 55 degrees south. 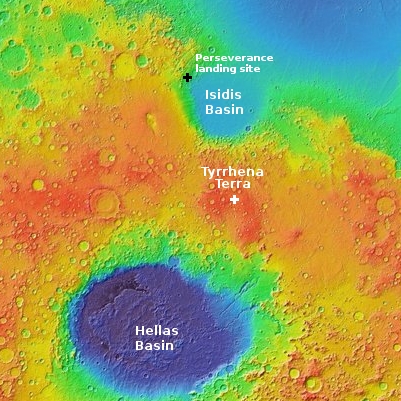 The cratered roughness of this region means that there is a lot of variety in the surface minerals, including the presence of what scientists called hydrated minerals, formed in the presence of water and therefore having the elements of water (hydrogen and oxygen) locked within their molecular structure. Data has so far found these hydrated materials on the inner rims of craters, which suggest they come from ancient terrains that were exposed by the impacts.

The numerous craters are also traps for sand, as can be seen by the dunes in the crater in the upper right.

To me, the roughness of this terrain is its most significant feature. Located in the equatorial regions, the data has so far found little obvious evidence of ice or water, making it less appealing as a site for settlement. The roughness is an even bigger strike against this territory. Even if we did eventually find ice here, getting to and from this region will discourage exploration. There are many other places on Mars where water is well documented, near the surface, and where landing and moving about is far less difficult.

So, let me predict the far future, when humans have built many colonies on Mars. While the big cities will be in the wet northern plains, preferably at spots closest to the equator, this region will remain a rural backwater, where few people live or work.