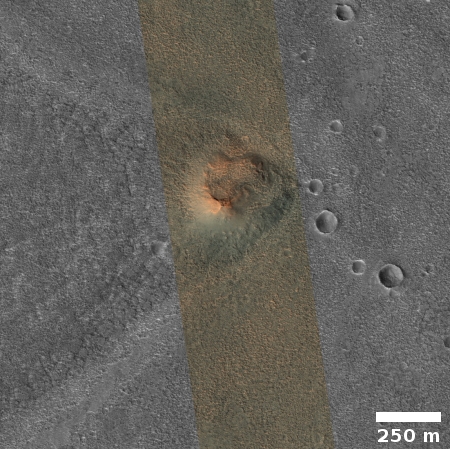 Cool image time! The picture on the right, cropped and reduced in resolution to show here, was taken by the high resolution camera on Mars Reconnaissance Orbiter on April 21, 2019, and shows the erosion process produced by either wind or water as it flowed from the east to the west past one small mesa.

It is almost certain that the erosion here was caused by wind, but as we don’t know when this happened, it could also be very old, and have occurred when this terrain was at the bottom of the theorized intermittent ocean that some believe once existed on these northern lowlands. The location itself, near the resurgences for Marineris Valles and the other drainages coming down from the giant volcanoes, might add weight to a water cause, except that the erosional flow went from east to west, and the resurgences were coming from the opposite direction, the west and the south.

The terrain has that same muddy wet look also seen in the more damp high latitudes near the poles. Here, at 43 degrees latitude, it is presently unknown however how much water remains below the surface.

When the craters to the right were created, however, it sure does appear that the ground was damp. Similarly, the material flow to the west of the mesa looks more like the kind of mud flow one would see underwater.

I must emphasize again that I am merely playing at being a geologist. No one should take my guesses here very seriously.

At the same time, I can’t help being endlessly fascinated by the mysterious nature of the Martian terrain.