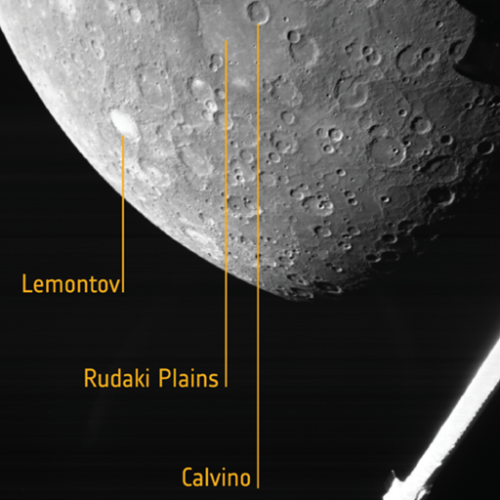 This past weekend the European/Japanese duel-orbiter mission made its first flyby of Mercury, taking its first images of that planet.

The photo to the right is one example, cropped and reduced slightly to post here. It was taken by the spacecraft’s monitoring cameras, designed for engineering purposes, which means the resolution is not very high and the camera is positioned so that parts of the spacecraft were visible in each shot. For example, the white strut in the lower right is the spacecraft’s magnetometer boom, which also was used to gather data during the flyby.

Still, the photos demonstrated that the spacecraft is pointing correctly and on course. It will complete five more Mercury fly-bys before going into orbit in 2025.

The next flyby will occur in June ’22.

BepiColombo about to make first of six Mercury flybys
September 28, 2021 11:16 am Robert Zimmerman

The European/Japanese BepiColombo probe will make its first of six fly-bys of Mercury on October 1, 2021, as it steadily adjusts its flight path to enter orbit around the planet in 2025.

The mission is made up of two Mercury orbiters, Europe’s Mercury Planetary Orbiter and Japan’s Mio orbiter.

During the flybys it is not possible to take high-resolution imagery with the main science camera because it is shielded by the transfer module while the spacecraft is in cruise configuration. However, two of BepiColombo’s three monitoring cameras (MCAMs) will be taking photos from about five minutes after the time of close approach and up to four hours later. Because BepiColombo is arriving on the planet’s nightside, conditions are not ideal to take images directly at the closest approach, thus the closest image will be captured from a distance of about 1000 km.

The cameras provide black-and-white snapshots in 1024 x 1024 pixel resolution, and are positioned on the Mercury Transfer Module such that they also capture the spacecraft’s solar arrays and antennas. As the spacecraft changes its orientation during the flyby, Mercury will be seen passing behind the spacecraft structural elements.

These will be the first close-up pictures of Mercury since the Messenger orbiter mission ended in 2015.

Two European planetary probes, one launched to study the inner solar enviroment and the second to study Mercury, are going to fly past Venus only 33 hours apart on August 9th and 10th.

Solar Orbiter, a partnership between ESA and NASA, will fly by Venus on 9 August with a closest approach of 7995 km at 04:42 UTC. Throughout its mission it makes repeated gravity assist flybys of Venus to get closer to the Sun, and to change its orbital inclination, boosting it out of the ecliptic plane, to get the best – and first – views of the Sun’s poles.

BepiColombo, a partnership between ESA and JAXA, will fly by Venus at 13:48 UTC on 10 August at an altitude of just 550 km. BepiColombo is on its way to the mysterious innermost planet of the solar system, Mercury. It needs flybys of Earth, Venus and Mercury itself, together with the spacecraft’s solar electric propulsion system, to help steer into Mercury orbit against the immense gravitational pull of the Sun.

The two spacecraft will zip past a different side of Venus. For a variety of reasons, the imagery gathered will not of high resolution, though both spacecraft will gather data that will eventually be correlated with similar data being gathered by Japan’s Akatsuki probe, in orbit around Venus since 2015. The two-pronged European and Japanese probe BepiColombo today has completed its first of two fly-bys of Venus on its way to an arrival at Mercury in 2025.

The image to the right is one of 64 taken during the fly-by. The science team has created a movie from those images, showing Venus slide past as the spacecraft slewed to view it. During the fly-by the instruments on board its Japanese and European orbiters, both of which will separate and operate independently once they reach Mercury, gathered data of Earth’s sister planet.

The spacecraft still needs one more Venus fly-by plus six past Mercury to get it on a trajectory that will put it in orbit around Mercury. It has also already completed one fly-by past Earth in this complicated route.

The European/Japanese mission to Mercury has begun the first operational firing of its four ion engines, set to last for the next two months.

This might seem like a ridiculously long burn, since most conventional rocket engines fire for minutes, not months. These are ion engines, however, far more efficient but producing a very tiny acceleration. It takes a long time for their burns to accumulate a velocity change.

The joint European/Japanese mission BepiColombo has begun testing its ion engine thrusters for the first time in space as it heads to Mercury.

Testing took place during a unique window, in which BepiColombo remained in continuous view of ground-based antennas and communications between the spacecraft and those controlling it could be constantly maintained. This was the only chance to check in detail the functioning of this fundamental part of the spacecraft, as when routine firing begins in mid-December, the position of the spacecraft will mean its antennas will not be pointing at Earth, making it less visible to operators at mission control.

They have so far successfully tested two of the four engines.

After twenty years of development, the European Space Agency this week finally unveiled the completed dual orbiters that it hopes to launch on a seven year journey to Mercury in October 2018.

The 4,100-kilogram BepiColombo consists of two orbiters that will launch together — the ESA-managed Mercury Planetary Orbiter (MPO) and the JAXA-owned Mercury Magnetospheric Orbiter (MMO). The two spacecraft will be delivered to the orbit around Mercury stacked on top of each other by the Mercury Transfer Module (MTM). During the seven-year journey, the MMO will be shielded from the sun by the MMO Sunshield and Interface Structure (MOSIF), which will also serve as a mechanical and electrical interface between the two orbiters.

“MPO focuses on the planet, the surface and the interior size,” said Reininghous. “The orbit is a polar one — 480km times approximately 1500km — a little bit elliptical but extremely close to the planet as such with a return period of 2.3 hours. The data return is estimated at 1.5 gigabit per year.”

The MMO will focus on the planetary environment including the planet’s atmosphere, according to Reininghous. “The orbit is also polar but far more elliptical — 590 km times approximately 11,700 km. It has a period of 9.3 hours. The data return is approximately 10 percent of what we expect from the MPO.”

The European orbiter is much larger and more expensive, with Japanese probe budget being about a tenth the cost.

According to ESA, the mission took so long to build because in 2004, after about seven years of development, ESA suddenly realized that its orbiter’s thermal protection was inadequate, and required a complete redesign. To me, this is either outright incompetence (they knew from the start they were going to Mercury) or a clever way to extend the funding so that it provides an entire lifetime’s work for its builders. Think about it. Twenty-one years from concept to launch, then seven years to fly to Mercury, and then one to two years in orbit. That’s more than thirty years for this single mission.