Today’s blacklisted American includes anyone at a Vermont high school who dares say a boy is a boy
November 23, 2022 2:16 pm Robert Zimmerman 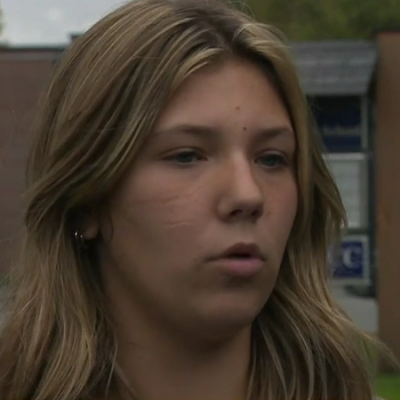 Blake Allen, punished for being a normal high school girl

We now return for the third time to the saga of Randolph Union High School in Vermont, a place where apparently you are not allowed to state the simple biological fact that a boy is a boy and a girl is a girl. Worse, you must allow boys to enter a girls’ dressing room and ogle them freely, and if you dare challenge this absurdity, you will be fired or suspended.

This craziness began in late September, when a boy claiming to be a girl (because he wanted to play on the girls volleyball team) entered the girls dressing room and watched the girls change, much to their discomfort. When the girls complained to school officials, the officials immediately banned those girls from using their own dressing room, reserving it now solely to this one boy.

The story became even more insane when the local television station, WCAX, decided to censor itself. It had covered this story with reasonable accuracy when the story broke. In mid-October however it decided that its job was publishing the agenda of the queer community, not reporting the news, and it censored its own story, removing it from the internet. (You can still watch it here however.)

Meanwhile, school officials have continued their track record of insanity. These officials not only locked the girls from their own locker room, they suspended one girl, Blake Allen, because she had been the most outspoken of all, appearing in that censored WCAX story. As part of her punishment, school officials demanded she admit 2+2=5 in a “reflective essay.”
END_OF_DOCUMENT_TOKEN_TO_BE_REPLACED