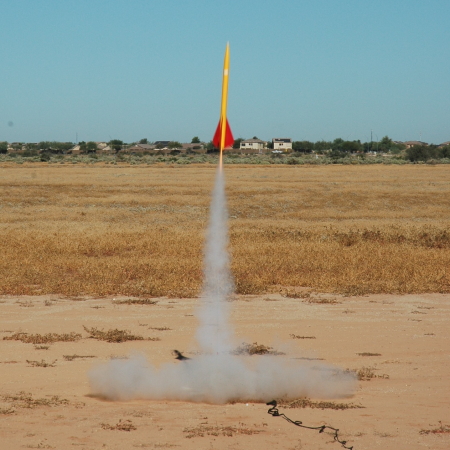 Those who are regular readers of this webpage know that I generally have a low opinion of the American public school system, based on ample evidence. It generally fails to educate while working to abuse and indoctrinate young children in ways that are so ugly and inappropriate that often the administrators and teachers involved could actually be charged with child abuse.

Today I am instead going to provide an example of a public school doing right by its students. On Saturday I was invited to watch as an afterschool engineering group, run by John Morris, the Engineering & Mathematics teacher at Casa Grande Union High School in Arizona, went out to launch model rockets that they had built themselves.

The launch to the right was the first of the day. The rest of the post below is image oriented, to give you a feel of what it involved in teaching young high school students how to make and launch small rockets. That activity, while involving relatively simple engineering, provides them the right grounding for learning how to work hard, make sure they do the work right, and learning that failure is really only a step towards success.
END_OF_DOCUMENT_TOKEN_TO_BE_REPLACED