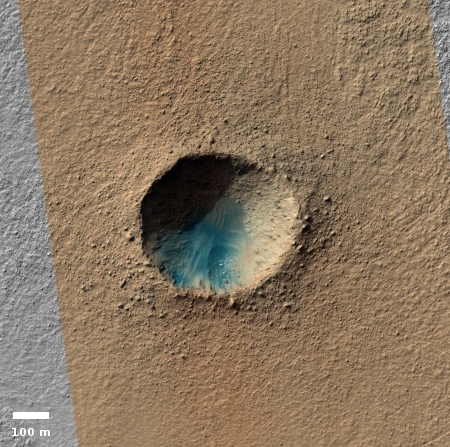 Cool image time! In the July release of images from the high resolution camera of Mars Reconnaissance Orbiter (MRO) was the image to the right, cropped to post here, showing what I suspect is a relatively young crater located in the lowest part of Hellas Basin, what I call the bottom of Mars.

Though this crater is not located at the lowest point in Hellas, it is not far off from there. What makes it important to geologists are two facts. First, there are not a lot of craters in Hellas, which helps indicate it is a relatively young feature. Second, and more important, the impact has made accessible material from below the surface, indicated by the different colors in this image. From this information they can better constrain their theories about the Basin’s formation and where it fits in Mars’s overall geological history.

Make sure you take a look at the full photograph by clicking of the image, and compare it with the earlier Hellas Basin images I posted here. The surface of Hellas appears to have a lot of flow features, as if it was laid down by volcanic activity, or by the motion of water that covered it. In either case that would explain the overall lack of craters.

Scientists are now claiming they have found a second crater buried under Greenland’s icecap.

To confirm his suspicion about the possible presence of a second impact crater, MacGregor studied the raw radar images that are used to map the topography of the bedrock beneath the ice, including those collected by NASA’s Operation IceBridge. What he saw under the ice were several distinctive features of a complex impact crater: a flat, bowl-shaped depression in the bedrock that was surrounded by an elevated rim and centrally located peaks, which form when the crater floor equilibrates post-impact. Though the structure isn’t as clearly circular as the Hiawatha crater, MacGregor estimated the second crater’s diameter at 22.7 miles. Measurements from Operation IceBridge also revealed a negative gravity anomaly over the area, which is characteristic of impact craters.

“The only other circular structure that might approach this size would be a collapsed volcanic caldera,” MacGregor said. “But the areas of known volcanic activity in Greenland are several hundred miles away. Also, a volcano should have a clear positive magnetic anomaly, and we don’t see that at all.”

It must be emphasized that this conclusion remains very uncertain. What they have found is a depression that has features indicative of an impact crater, data that is far from sufficient to definitively prove the crater is real.

Scientists have raised questions about the meteorite impact that was reported to have occurred in Nicaragua on Saturday.

More here. There are doubts about the impact crater, the theory that the meteorite was somehow related to the meteorite that flew past the Earth on Sunday, and the boom sound that local residents heard that same night.

The scar appeared at some time between imaging of this location by the orbiter’s Context Camera in July 2010 and again in May 2012. Based on apparent changes between those before-and-after images at lower resolution, researchers used HiRISE to acquire this new image on Nov. 19, 2013. The impact that excavated this crater threw some material as far as 9.3 miles (15 kilometers).

The Lunar Orbiter image of Copernicus Crater, taken forty-six years ago, has been re-released after significant refurbishing..
May 24, 2012 12:53 pm Robert Zimmerman Indian scientists, using data from their lunar probe Chandrayaan-1, have found evidence for past volcanic activity on the central peak of the crater Tycho.
April 16, 2012 9:26 am Robert Zimmerman

Indian scientists, using data from their lunar probe Chandrayaan-1, have found evidence for past volcanic activity on the central peak of the crater Tycho. However, according to the scientists, that is not what it is. Instead, this is merely debris left behind from an avalanche.
END_OF_DOCUMENT_TOKEN_TO_BE_REPLACED

Could this weird lunar crater be the crash site for Lunar Orbiter 2?

Exploring the floor of Copernicus Using QuickMap, I spent a few hours this past weekend strolling about on the northern half of the floor of the crater Copernicus. It is in this area, annotated in the image on the right, that NASA engineer James Fincannon has already located a slew of collapse features and possible caves, the images of which I have posted previously on behindtheblack. (Click on the image or here to see a larger version of this updated index map.)

(You also can go sightseeing there if you wish. Go to QuickMap and zoom in on 10.1 latitude and -20.1 longitude to get to the floor of Copernicus. Or pick your own spot on the lunar surface and do some of your own exploring!)

What I found in the northern half of Copernicus’s floor was a plethora of possible caves and collapse features. Literally, the crater floor is littered with what appear to be pits, fissures, rills, and sinks. More significantly, sometimes the cave entrances line up with long straight collapse features, suggesting strongly the existence of extensive underground passages beyond the initial entrance pits.
END_OF_DOCUMENT_TOKEN_TO_BE_REPLACED