Another Webb galaxy found even closer to the Big Bang
July 27, 2022 9:54 am Robert Zimmerman 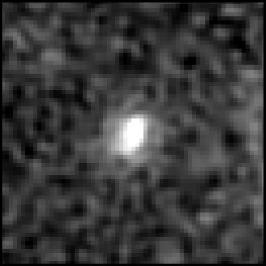 Using data from the first Webb deep field, astronomers have identified another galaxy in that image that apparently was able to form less than 250 million years after the the Big Bang, the theorized beginning of the universe.

Like the distant galaxies described last week, it also appears to have the equivalent of a billion Suns of material in the form of stars. The researchers estimate that it might have started star formation as early as 120 million years after the Big Bang, and had certainly done so by 220 million years.

You can read the actual research paper here [pdf]. The image of the galaxy to the right is taken from figure 4 of the paper. From its abstract:

We provide details of the 55 high-redshift galaxy candidates, 44 of which are new, that have enabled this new analysis. Our sample contains 6 galaxies at z≥12, one of which appears to set a new redshift record as an apparently robust galaxy candidate at z≃16.7.

The uncertainty of science: A new study has found that the accepted consensus for the formation of large elliptical galaxies does not work, and that, rather than forming from the merger of smaller spiral galaxies, ellipticals formed in place from the material at hand.

From the press release [pdf].

“We started from the data, available in complete form only for the closer galaxies and in incomplete form for the more distant ones, and we filled the ‘gaps’ by interpreting and extending the data based on a scenario we devised” comments Mancuso. The analysis also took into account the phenomenon of gravitational lensing, which allows us to observe very distant galaxies belonging to ancient cosmic epochs.

In this “direct” manner (i.e., model-independent) the SISSA group obtained an image of the evolution of galaxies even in very ancient epochs (close, in a cosmic timescale, to the epoch of reionization). This reconstruction demonstrates that elliptical galaxies cannot have formed through the merging of other galaxies, “simply because there wasn’t enough time to accumulate the large quantity of stars seen in these galaxies through these processes”, comments Mancuso. “This means that the formation of elliptical galaxies occurs through internal, in situ processes of star formation.

The uncertainty of science: Astronomers have detected seven galaxies that apparently formed almost immediately after the Big Bang, much faster than any theory of galaxy formation had predicted.

The article does a good job of outlining the present theory of the early universe after the Big Bang. Astronomers have discovered a trinary of supermassive black holes at the center of a distant collision of multiple galaxies.

Astronomer Roger Deane of the University of Cape Town in South Africa and his colleagues have been watching a particular quasar, known as SDSS J1502+1115, in the constellation Boötes. Other astronomers had found that the object, located 4.3 billion light-years from Earth, possessed two supermassive black holes, each the center of a large galaxy smashing into another. The black holes are at least 24,000 light-years apart.

Deane wanted to confirm their existence, so he used an intercontinental array of radio dishes that yields even sharper views than the Hubble Space Telescope. Lo and behold, one of the black holes turned out to be two. “We were incredibly surprised,” says Deane, whose team reports its findings online today in Nature.

While the discovery of this system is incredibly cool, this article in the journal Science is surprisingly incorrect on some points, while also missing the main story.
END_OF_DOCUMENT_TOKEN_TO_BE_REPLACED

Astronomers have discovered that a large number of dwarf galaxies are orbiting Andromedea in a flat plane, like our solar system, contrary to all predictions.
January 3, 2013 10:40 am Robert Zimmerman

The uncertainty of science: Astronomers have discovered that a large number of dwarf galaxies are orbiting Andromedea in a flat plane, like our solar system, contrary to all predictions.

The study reveals almost 30 dwarf galaxies orbiting the larger Andromeda galaxy in this regular, solar system-like plane. The astronomers’ expectations were that these smaller galaxies should be buzzing around randomly, like bees around a hive. “This was completely unexpected,” said Geraint Lewis, one of the lead authors on the Nature publication. “The chance of this happening randomly is next to nothing.” The fact that astronomers now see that a majority of these little systems in fact contrive to map out an immensely large – approximately one million light years across – but extremely flattened structure, implies that this understanding is grossly incorrect. Either something about how these galaxies formed, or subsequently evolved, must have led them to trace out this peculiar, coherent, structure.