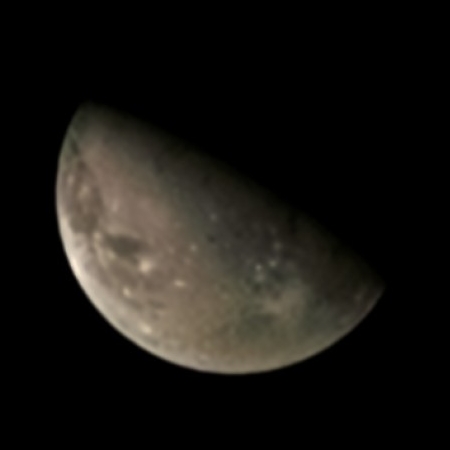 During Juno’s 24th close approach to Jupiter the spacecraft was able to take the first images ever of the north pole of Ganymede, the largest moon in the solar system. The image to the right was processed by citizen scientist Roman Tkacenko, and shows a variety of light and dark features.

The Juno science team decided for some reason to highlight a different set of images processed by citizen scientist Gerald Eichstädt, using the same data. I prefer Tkacenko’s version, because he focused in on the planet itself, making it easier to see what’s there.

In either case, however, the fuzziness of the image reminds me of planetary astronomy in my early childhood. Images like this, taken by telescopes on Earth, were the best we had of any planet beyond the Moon. Made it very hard to understand what was there, or what it meant.

By measuring the interaction of Jupiter and Ganymede’s magnetic fields, scientists have been able to estimate the size of the salt water ocean in Ganymede’s interior.

A team of scientists led by Joachim Saur of the University of Cologne in Germany came up with the idea of using Hubble to learn more about the inside of the moon. “I was always brainstorming how we could use a telescope in other ways,” said Saur. “Is there a way you could use a telescope to look inside a planetary body? Then I thought, the aurorae! Because aurorae are controlled by the magnetic field, if you observe the aurorae in an appropriate way, you learn something about the magnetic field. If you know the magnetic field, then you know something about the moon’s interior.”

That’s more water than contained in all of Earth’s oceans. 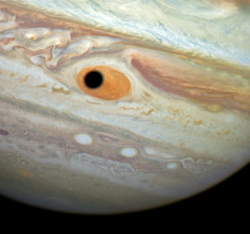 By timing things perfectly, scientists have used the Hubble Space Telescope to take a very cool image of Jupiter, with the shadow of its largest moon Ganymede cast into the planet’s Giant Red Spot.

The science from this image is somewhat limited, but damn, it sure is a neat demonstration of our modern ability to do amazing things with technology.

A very useful start to the geological study of the solar system’s largest moon.

Known as JUICE, the Jupiter Icy Moons Explorer, the probe will enter orbit around the gas giant planet in 2030 for a series of flybys of Ganymede, Callisto and Europa. JUICE will brake into orbit around Ganymede, Jupiter’s largest moon, in 2032 for at least one year of close-up research.