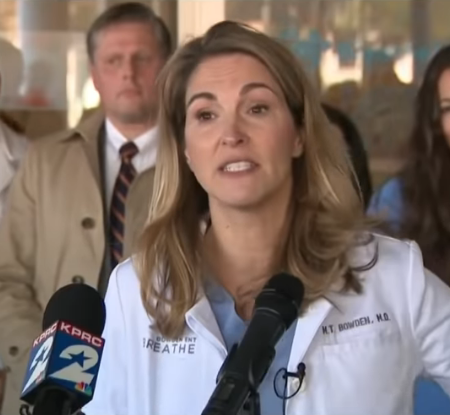 Bring a gun to a knife fight: Blacklisted Dr. Mary Bowden has now upped her game and filed a $25 million defamation lawsuit against Houston Methodist Hospital in Texas and its CEO, Marc Boom, for the slanders both published against her for her opposition to the COVID jab mandates.

You can read her lawsuit here [pdf].

Bowden had been suspended by Houston Methodist Hospital in November 2021 and was subsequently forced to resign because she publicly opposed COVID shot mandates and used ivermectin in treating her Wuhan flu patients. Both the hospital and Boom had accused her of “spreading dangerous misinformation which is not based on science” because she had successfully treated about 2,000 COVID patients, none of which ever needed hospitalization, with both ivermectin and monoclonal antibodies.

In February 2022 Bowden began her pushback when she sued Houston Methodist to get its own data on the success or failure of its own CDC-endorsed treatment of COVID, as well as its financial records to find out how much it had earned from that treatment.
END_OF_DOCUMENT_TOKEN_TO_BE_REPLACED

Pushback: Mary Bowden, a doctor who was suspended from working at Houston Methodist Hospital because she publicly opposed COVID shot mandates and used ivermectin in treating her Wuhan flu patients, has now sued the hospital to get data on the effects, pro and con, of those shots on its own patients.

The hospital had accused her of “spreading dangerous misinformation which is not based on science” because she had successfully treated about 2,000 COVID patients, none of which ever needed hospitalization, with both ivermectin and monoclonal antibodies.

Bowden apparently has publicly advocated choice by both doctors and patients, something the lords at Houston Methodist cannot tolerate.

Bowden added, “We all know that early COVID treatment works, it saves lives, and I’m not going to be silenced, intimidated, or bullied by Houston Methodist, Houston Chronicle, or anyone else who wants to target physicians that question the narrative.”

In November, [her Attorney Steve] Mitby said that Bowden had never peddled disinformation, as a Stanford University-trained physician who has had vast experience in treating coronavirus patients. “She is helping her patients, through a combination of monoclonal antibodies and other drugs, to recover from COVID. Dr. Bowden’s proactive treatment has saved lives and prevented hospitalizations,” he said at the time. “Dr. Bowden also is not anti-vaccine as she has been falsely portrayed. Dr. Bowden has opposed vaccine mandates, especially when required by the government. That is not the same as opposing vaccines.”

Hospitals nationwide have been blocking doctors from considering these other treatments, even though there is building evidence that they work. Bowden’s own success is an example of that evidence.

The lawsuit is not seeking damages. Instead, it wishes to obtain from the hospital its data on its own success at treating the Wuhan flu, as well as what it has gained financially by that treatment.
END_OF_DOCUMENT_TOKEN_TO_BE_REPLACED