New evidence of lakes and streams in Mars’ recent past
September 15, 2016 at 1:26 pm Robert Zimmerman Points of Information

Using data from three different orbiters scientists have mapped out a region of lakes and streams on Mars that appear to have contained liquid water a billion years after the red planet is believed to have dried up.

To bracket the time period when the fresh shallow valleys in Arabia Terra formed, scientists started with age estimates for 22 impact craters in the area. They assessed whether or not the valleys carved into the blankets of surrounding debris ejected from the craters, as an indicator of whether the valleys are older or younger than the craters. They concluded that this fairly wet period on Mars likely occurred between two and three billion years ago, long after it is generally thought that most of Mars’ original atmosphere had been lost and most of the remaining water on the planet had frozen.

The characteristics of the valleys support the interpretation that the climate was cold: “The rate at which water flowed through these valleys is consistent with runoff from melting snow,” Wilson said, “These weren’t rushing rivers. They have simple drainage patterns and did not form deep or complex systems like the ancient valley networks from early Mars.”

This region, Arabia Terra, is the same area where scientists have found fossilized rivers.

Using images from Cassini scientists think they have made their first detection of waves on a lake on Titan
March 17, 2014 at 3:19 pm Robert Zimmerman Points of Information

Using images from Cassini scientists think they have made their first detection of waves on a lake on Titan.

Spring is moving to summer on Titan, and as the season changes scientists are expecting the number of storms in the northern latitudes to increase, thereby filling these lakes.

Why has Cassini detected no waves on the lakes of Titan?
July 22, 2013 at 8:24 am Robert Zimmerman Points of Information

Why has Cassini detected no waves on the lakes of Titan?

Scientists now think it is possible for there to be floating methane ice on the lakes of Titan.
January 8, 2013 at 11:56 am Robert Zimmerman Points of Information

Scientists now think it is possible for there to be floating methane ice on the lakes of Titan.

Up to this point, Cassini scientists assumed that Titan lakes would not have floating ice, because solid methane is denser than liquid methane and would sink. But the new model considers the interaction between the lakes and the atmosphere, resulting in different mixtures of compositions, pockets of nitrogen gas, and changes in temperature. The result, scientists found, is that winter ice will float in Titan’s methane-and-ethane-rich lakes and seas if the temperature is below the freezing point of methane — minus 297 degrees Fahrenheit (90.4 kelvins). The scientists realized all the varieties of ice they considered would float if they were composed of at least 5 percent “air,” which is an average composition for young sea ice on Earth. (“Air” on Titan has significantly more nitrogen than Earth air and almost no oxygen.)

Twelve of the most beautiful lakes in the world
June 13, 2011 at 10:17 am Robert Zimmerman Points of Information

Twelve of the world’s most beautiful lakes.

Dried up lake beds on Mars?

A paper published on Saturday in the Journal of Geophysical Research – Planets of the American Geophysical Union, scientists suggest that the polygonal shaped cracks seen in the crater floors on many Martian craters could be evidence of ancient lakes. The evidence also suggests that the lakes were formed by the impact that created the crater. The energy of the impact melted underground ice to form a temporary lake inside the crater, which eventually dries out, leaving behind the polygons. From the abstract:

We propose desiccation to be a dominant mechanism for the formation of Crater Floor Polygons without ruling out thermal contraction as a possible contributor in some cases. This implies that lakes or water-rich sediments occupied the craters in the past. Many such aqueous environments have no apparent external source of water, and thus, hydrothermal processes occurring shortly after the impact event may be viable explanations for the observed evidence. 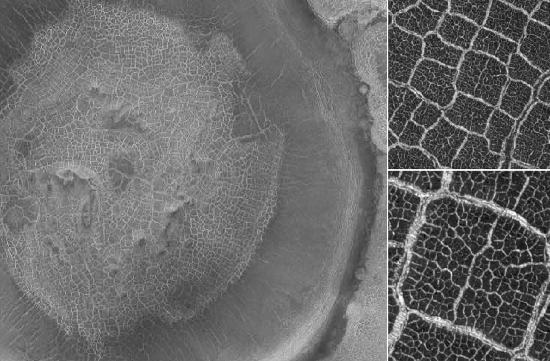 Scientists measure the rise and fall of lakes on Titan
July 16, 2010 at 12:35 pm Robert Zimmerman Points of Information

It appears we are entering the dry season on Titan. Scientists have observed a 1 meter drop in the levels of Titan’s methane lakes over the last four years as the seasons on the moon go from summer to fall. Fun quote: “[The scientists] report that the shoreline of Ontario Lacus receded by about 10 kilometers (6 miles) from June 2005 to July 2009.”