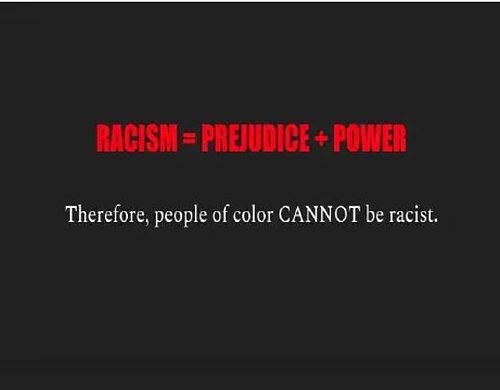 One slide shown during the class, illustrating that according to
critical race theory, the student’s black half is pure goodness,
even as his white half is the devil incarnate.

They’re coming for you next: A Las Vegas high school student, born from the marriage of a white man and black woman, was given a failing grade because he would not label his white half as evil and racist.

William Clark received a failing grade in his Sociology of Change class after he refused to categorize and label his racial, religious and sexual identities, according to a press release from Schoolhouserights.org, which supports civil rights litigation in defense of students’ freedom of conscience in public education.
END_OF_DOCUMENT_TOKEN_TO_BE_REPLACED

Hate from the left

The last few days have been a horror show of hate. While most decent people were appalled by the murderous attack in Las Vegas and horrified by the evil of the man who did it, it appears the thing that offended the left most of all was not the murderer, but the guns he used and the nerve of conservatives and Republicans to defend the 2nd amendment of the Constitution in defying their non-stop efforts to repeal it. That outrage against conservatives often bordered on insane and outright hate, completely divorced from facts or reality.

This list of stories is only a small sampling. The hateful attacks the past few days on conservatives and anyone connected with Trump and the Republican Party by Democrats and leftists have been non-stop and repeatedly vicious.

The last story above however reveals clearly where these attacks are going. The left, and the Democratic Party that supports the left’s ideology, wants to end freedom and obtain unrivaled and unopposed power. Anything that stands in their way must be destroyed, including the Bill of Rights. Moore’s proposal to repeal the 2nd amendment is not the only proposal put forth by Democrats in recent years trying to repeal parts of the Bill of Rights. For example, in June Democratic Congressmen held a sit-in in the House, protesting the due process clause in the 5th amendment. Then, in 2014 the Democrats proposed repealing the 1st amendment. We already know that the left has worked tirelessly for the past century to make the 9th and 10th amendments moot so the federal government will rule over areas of law that were reserved to the states, or the people.

That’s 5 of the Bill of Right’s 10 amendments that leftists and the Democratic Party oppose. If I was dig a bit deeper I am sure I can find examples where they have worked to repeal the other five as well.

I want make it clear where this Democratic Party and its supporters in academia and Hollywood now stands. They hate all opposition, and want to repeal the constitutional protections created to protect ordinary people from tyranny. If you stand for freedom, you cannot stand with them.

And if you don’t believe me, watch this video and the hate coming from this woman against someone who was merely wearing a “Make America Great Again” hat. She steals it, then says his free speech and property rights should be suspended, merely because she hates him. Others might say it is because she disagrees with him, but what I see is unbridled hate, pure and vicious.

We need to recognize this hate for what it is. It is what caused so many liberals in the past two days to attack conservatives, not the murderer who killed dozens in Las Vegas. And it is this kind of hate that always leads to oppression, mass murder, and tyranny.

Thousands of union workers in Las Vegas might go on strike because of the increased costs of healthcare, imposed on them by Obamacare.
March 6, 2014 4:12 pm Robert Zimmerman

Finding out what’s in it: Thousands of union workers in Las Vegas might go on strike because of the increased costs of healthcare, imposed on them by Obamacare.

On Feb. 20, thousands of housekeepers, porters, cooks, cocktail servers, and others represented by Nevada’s largest union, the Culinary Union Local 226, voted to end a contract extension the workers agreed to last summer. The union wants to maintain its current benefits — including health care coverage at no cost to workers, pensions, and guaranteed 40-hour workweeks.

Rising health care costs due to provisions in the Affordable Care Act could put those benefits in jeopardy, the union says.

Last week’s 7.4 magnitude earthquake in Mexico apparently caused a miniature tsunami in a spring pool near Las Vegas, 1,700 miles away. With video.