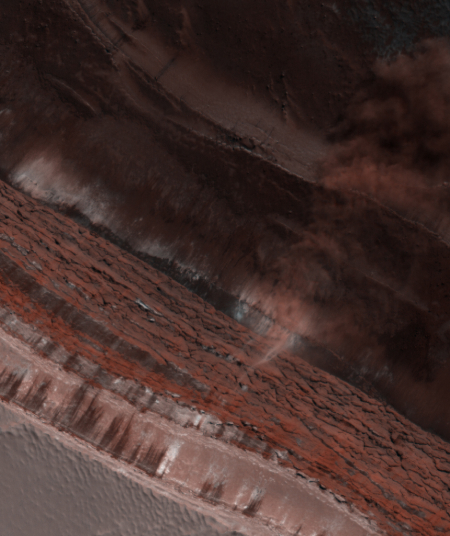 As the Martian spring started to unfold in April 2019, the focus of many Martian planetary scientists immediately shifted to the northern polar icecap, where they fully expected, based on previous experience, some spectacular events to occur.

I have already reported on this year’s initial observations of the sublimation of the carbon dioxide frost layer. That frost layer, generally less than six feet thick, falls as dry ice snow with the coming of winter, then sublimates away each spring. Since the arrival of Mars Reconnaissance Orbiter (MRO) in 2006 and its discovery of this process by its high resolution camera, these scientists have been monitoring the disappearance of that frost layer from Martian year to Martian year.

That sublimation process also brings with it other spectacular changes, including the coming of frequent avalanches along the high cliff scarps, ranging in heights from 1,500 to 3,000 feet, that comprise the edge of that north pole icecap. The image above, reduced to post here, shows one of the many avalanches found this spring and photographed as they were actually happening. It looks down at the cliff that runs from the left to the lower right of the image, with its top being the flat plateau in the lower left. From the caption, written by Dr. Candice Hansen of the Planetary Science Institute in Tucson, Arizona,

Every spring the sun shines on the side of the stack of layers at the North Pole of Mars known as the north polar layered deposits. The warmth destabilizes the ice and blocks break loose.

When they reach the bottom of the more than 500 meter tall cliff face [about 1,600 feet], the blocks kick up a cloud of dust. (In the cutout, the top layer of the north polar cap is to the lower left.) The layers beneath are different colors and textures depending on the amount of dust mixed with ice.

The linear many-layered look of that cliff face is due to the many layers believed to exist within the permanent water icecap of Mars. To give some perspective, this cliff is several hundred feet taller than the World Trade Center after completion. Those falling blocks are dropping farther than the bodies that horribly fell from the Trade Center the day it was hit by airplanes flown by Islamic terrorists on September 11, 2001.

The map below shows most of the eastern half of that icecap, with the white boxes showing the various places MRO has spotted such avalanches.
END_OF_DOCUMENT_TOKEN_TO_BE_REPLACED

The uncertainty of science: For reasons that scientists do not understand, the Earth’s magnetic field has been undergoing unexpected shifts in the past two years, causing its north pole to move significantly and somewhat quickly from Canada across to Siberia.

Earth’s north magnetic pole has been skittering away from Canada and towards Siberia, driven by liquid iron sloshing within the planet’s core. The magnetic pole is moving so quickly that it has forced the world’s geomagnetism experts into a rare move.

On 15 January, they are set to update the World Magnetic Model, which describes the planet’s magnetic field and underlies all modern navigation, from the systems that steer ships at sea to Google Maps on smartphones.

The most recent version of the model came out in 2015 and was supposed to last until 2020 — but the magnetic field is changing so rapidly that researchers have to fix the model now. “The error is increasing all the time,” says Arnaud Chulliat, a geomagnetist at the University of Colorado Boulder and the National Oceanic and Atmospheric Administration’s (NOAA’s) National Centers for Environmental Information.

Note that they have delayed the release of the World Magnetic Model until January 30, claiming the delay is caused by the government shutdown. Seems bogus to me. As I have already noted, these scientists aren’t slaves. If they think this is so important, and they have completed their work (which the article suggests they have), they can release the model, regardless of the federal government’s funding.

The first complete view of Earth as a globe — looking down from above the north pole.
June 22, 2012 8:48 am Robert Zimmerman

The first complete view of Earth as a globe — looking down from above the north pole.

The north pole of Mars in summer: the dry ice is gone, leaving an icecap of water only.