The spacecraft traveled 11.6 million miles from the Sun’s surface at perihelion, reaching a speed of 244,225 miles per hour. These achievements topple Parker Solar Probe’s own previous records for closest spacecraft to the Sun — previously about 15 million miles from the Sun’s surface — and fastest human-made object, before roughly 213,200 miles per hour.

Parker will continue to break these records with each orbit. 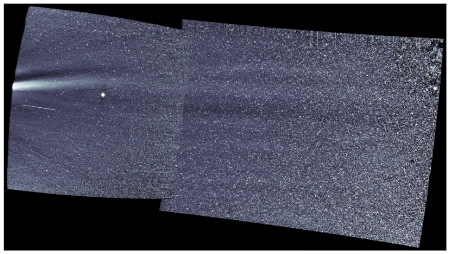 Having completed its first three orbits of the Sun, the Parker Solar Probe science team today made all the data obtained available to the public.

The image to the right was taken during the first close solar flyby in November 2018. It shows solar wind particles streaming past the spacecraft.

Do not expect many spectacular images from Parker. It has a camera, but the mission’s focus is the study of the Sun’s atmosphere and solar wind, neither of which are likely to be very photogenic.

The science team for the Parker Solar Probe has completed the download of all data gathered during the spacecraft’s first two solar orbits.

On May 6, 2019, just over a month after Parker Solar Probe completed its second solar encounter, the final transmission of 22 gigabytes of planned science data — collected during the first two encounters — was downlinked by the mission team at the Johns Hopkins Applied Physics Laboratory, or APL, in Laurel, Maryland.

This 22 GB is 50% more data than the team had estimated would be downlinked by this point in the mission — all because the spacecraft’s telecommunications system is performing better than pre-launch estimates. After characterizing the spacecraft’s operations during the commissioning phase, which began soon after launch, the Parker mission team determined that the telecom system could effectively deliver more downlink opportunities, helping the team maximize the download of science data.

The team has capitalized on the higher downlink rate, instructing Parker Solar Probe to record and send back extra science data gathered during its second solar encounter. This additional 25 GB of science data will be downlinked to Earth between July 24 and Aug. 15.

Don’t expect any immediate press conferences announcing results. It will take them time to analyze this batch, and they will probably want to do a few more orbits before coming to any conclusions.

Update: The spacecraft has successfully separated from its last stage and is on its way.

Over the next two months, Parker Solar Probe will fly towards Venus, performing its first Venus gravity assist in early October – a maneuver a bit like a handbrake turn – that whips the spacecraft around the planet, using Venus’s gravity to trim the spacecraft’s orbit tighter around the Sun. This first flyby will place Parker Solar Probe in position in early November to fly as close as 15 million miles from the Sun – within the blazing solar atmosphere, known as the corona – closer than anything made by humanity has ever gone before.

The U.S. and China are once again tied in the national rankings, 22 each.

The launch of the Parker Solar Probe on a ULA Delta 4-Heavy rocket was scrubbed early this morning two minutes prior to launch.

[A] member of the launch team announced a gaseous helium regulator alarm at T-minus 1 minute, 55 seconds. There was not enough time remaining in the launch window Saturday to resolve the alarm, so launch managers declared a scrub for the day.

In a brief statement, ULA said the launch was scrubbed “due to a violation of a launch limit, resulting in a hold.”

No other information about the gaseous helium system alarm, or the other technical concerns during the countdown, were released by NASA or ULA.

They are going to try again tonight, at 3:31 am Eastern. You can watch it here. The launch window closes on August 23. If they do not launch by then, they will have to wait until May 2019.

The spacecraft will fly closer to the Sun then any spacecraft ever has in order to study the Sun’s corona.

For the second time NASA has delayed the launch of the Parker Solar probe due to issues related to the Delta IV Heavy rocket.

The United Launch Alliance Delta IV Heavy was originally scheduled to launch the Parker Solar Probe on Aug. 4, before what NASA described as “a minor tubing leak” was discovered at the processing facility in Titusville. The launch slipped to Aug. 6 and now NASA and its mission partners are targeting Aug. 11 for a 45-minute launch window at 3:48 a.m. from Cape Canaveral Air Force Station.

The latest delay comes after “a small strip of foam was found inside the (spacecraft) fairing,” during final inspections after the spacecraft was encapsulated in the Delta IV Heavy nose cone, according to NASA.

The launch window closes on August 19, so there better not be many more problems.

Issue with thermometers on Parker Solar Probe
April 10, 2018 at 8:56 am Robert Zimmerman Points of Information

As NASA prepares the Parker Solar Probe for its summer launch, engineers are reviewing an issue with the spacecraft’s thermometers.

As those preparations continue, officials are studying problems with devices known as platinum resistance thermometers that are part of the spacecraft’s thermal control system. Those devices have suffered a higher-than-expected failure rate, according to a presentation at an April 5 meeting of NASA’s Heliophysics Advisory Committee.

The thermometers are lightweight, highly sensitive temperature sensors used to help provide feedback to the spacecraft’s cooling system and solar arrays, NASA spokesman Dwayne Brown said April 9. “We put all spacecraft through a rigorous test program to make sure all systems are working as designed and it is normal for a test program to uncover issues.”

“The team is looking very carefully at whether any change is needed,” Peg Luce, acting director of NASA’s heliophysics division, said at the meeting. The issue, she said, was debated “quite significantly” at a review last week to approve the shipment of the spacecraft to Florida, including whether to delay that shipment to study the problem. “There are certain, possible fixes if we need to fix something that could be done at the Cape, so the decision was to go ahead and ship,” she said.

This issue is especially critical as the spacecraft is intended to fly as close as four million miles from the Sun. If these thermometers fail too easily, the spacecraft will not be able to monitor its temperature properly, and it will likely fail much sooner than planned.

NASA has named its next solar mission, which will fly closer to the Sun than any previous mission, after pioneer solar scientist Eugene Parker, who in the 1950s predicted the existence of the solar wind.

The new moniker honors pioneering University of Chicago astrophysicist Eugene Parker, who predicted the existence of the solar wind — the stream of charged particles flowing constantly from the sun — back in 1958. [Solar Quiz: How Well Do You Know Our Sun?]

NASA has named about 20 space missions after people; the Hubble Space Telescope is perhaps the most famous example. But the 89-year-old Parker is the first researcher to be celebrated in this manner while still alive, agency officials said.

Parker deserves it, for sure, and it is really nice to honor him while he is still alive to appreciate it.

The spacecraft is scheduled to launch at the end of July.