“Spaceship Neptune,” operated by a company called Space Perspective from leased facilities at NASA’s Kennedy Space Center, will carry eight passengers at a time on six-hour flights. The passenger cabin, lifted by a huge hydrogen-filled balloon, will climb at a sedate 12 mph to an altitude of about 30 miles high. That will be followed by a slow descent to splashdown in the Atlantic Ocean where a recovery ship will be standing by to secure the cabin and crew.

While the company initially will operate out of the Florida spaceport, the system could be launched from multiple sites around the world, with Hawaii and Alaska near-term possibilities.

The co-CEO of this company, Jane Poynter, had been the head of WorldView here in Tucson when that company was first planning to do tourist flights like this. She got pushed out a little over a year ago as the company shifted away from tourist flights to military surveillance, only to reappear now in Florida with a new company proposing the same thing.

All power to her. I hope this new company succeeds. It is offering a product at half the price of Virgin Galactic that is actually far superior (30 miles altitude for six hours vs 50 miles for five minutes). 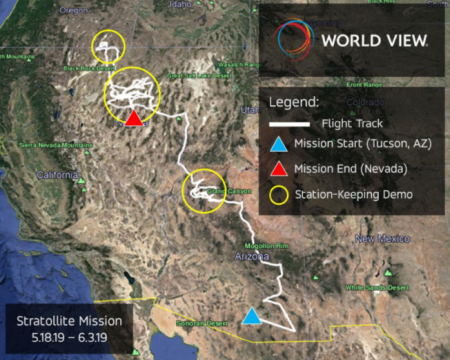 The map on the right is from their press release [pdf]. From the first link above:

During the 16-day flight, World View was able to spend up to eight days total in an area about 75 miles wide. It also demonstrated more precise station-keeping, says Hartman, by spending 55 straight hours in a region 62 miles wide and also 6.5 hours in an area a little less than 6 miles wide.

Staying within such a small area is crucial for the Stratollite system, as that capability could be useful for a number of different applications for customers, according to Hartman. He notes that such a system above Earth could be used by the military to aid certain missions operations, or the Stratollite could help monitor natural disasters like tornadoes and hurricanes, and help with disaster relief. “There’s just all kinds of very important use cases when we can provide a station keeping capability in an area as small as a [6-mile] diameter area,” says Hartman.

Throughout this flight, the Stratollite covered a distance of 3,000 miles, making its way to the Grand Canyon, Nevada, Oregon, and Utah. Once the World View team decided to bring the Stratollite back down to Earth, the company was able to land it within 400 feet of a targeted area in the Nevada desert where the vehicle was then recovered. World View even hopes to fly some of the components from this flight on an upcoming mission.

The company’s goal these days is not space tourism, but ground observations, and this flight is certainly a solid proof that they are getting close to achieving that goal.

A private Earth-observation satellite, WorldView-2, was either hit by space junk or had some internal failure that produced “8 debris pieces” in its vicinity.

The Joint Space Operations Center, which is the Defense Department’s nerve center for space operations and tracks space objects from Vandenberg Air Force Base in California, tweeted July 19 that it had identified a debris-causing event related DigitalGlobe’s WorldView-2 satellite.

The amazing thing about this is that the satellite is still functional, and to prove it the company has already released an image produced after the event.

The competition heats up: Worldview, the company planning to sell tickets for high-altitude tourist flights to the edge of space, successfully completed this weekend a test flight of a 10-percent scale prototype of its capsule and balloon.

The balloon reached an altitude just over 100,000 feet, just under 19 miles. The capsule then separated and landed safely using a parafoil. This success keeps them on schedule for their first commercial flights in 2017.

The competition heats up: Flights on Worldview high altitude balloon will be offered through the Neiman Marcus Christmas catalog.

World View, the commercial balloon spaceflight company, has been included in the Neiman Marcus Christmas Book as one of ten elite Fantasy Gifts. The annual Christmas Book will include an exclusive World View package available only to ten Neiman Marcus customers. This package features the rare opportunity to be a part of a World View test flight with a behind-the-scenes invitation while enjoying luxurious accommodations at the Miraval Resort in Tucson, Ariz. Each package also includes a private tour of Biosphere 2 with original crew member and World View CEO, Jane Poynter, along with a ticket to be one of the first to see Earth from the company’s luxury pressurized capsule.

Comparing the rocket vs balloon space tourism ride.
June 26, 2014 at 8:59 am Robert Zimmerman Points of Information

The competition heats up: Yahoo today published a 5 point comparison between a ride on Virgin Galactic’s SpaceShipTwo and Worldview’s Voyager balloon.

The winner, Virgin Galactic, but by a nose. As the story notes, Worldview is the better buy. “You can use the money you save for a nice vacation on Earth — where you can make new friends by telling stores about that time you went to space.”

The competition heats up: Worldview has successfully completed the first unmanned test flight of its stratospheric passenger balloon.

The flight brought a remote-controlled, balloon-borne craft up to a height of 120,000 feet (36.5 kilometers) and back down to 50,000 feet (15 kilometers). Then the craft was cut loose from the balloon and guided to a soft landing using an innovative parafoil.

World View’s Tycho prototype is just one-tenth the size of the pressurized capsule that the Arizona-based company plans to build for its Voyager tours. But Tycho’s maiden voyage put the system’s aerodynamics to a valuable initial test, said Taber MacCallum, who is World View’s co-founder and chief technology officer (as well as Poynter’s husband).

While these balloon tourist flights won’t go as high as the suborbital flights planned by Virgin Galactic, XCOR, and others, they will last far far longer and cost a third the price. They have already sold out their first three flights.