“Tolerance, freedom, and the hypocrisy in an age of confusion”
August 1, 2014 at 6:03 pm Robert Zimmerman Points of Information

The reflections of one man concerning the present social conflict between religion and gay rights.

An employee of a church or school is – must be! – a role model to all parishioners and students, even to the community. The church or school cannot allow its message, already under so much assault by the pop culture, the press, and the government, to be undermined even by its own employees.

Such actions [gay marriage] therefore force the hand of the Church; it must defend its policies by terminating employees who will no longer be the role models the Church needs.

Again, tolerating a failing is one thing; endorsing it is another. When you keep a failing private, you can hope for tolerance (your employer can continue to hope it’s a weakness that you’ll conquer or outgrow). But when one chooses to make that failing public – again, whether we agree that it’s a failing or not is immaterial; the Church thinks so, and the employee knew it – then one has to take the consequences of tearing that rift.

A very wise and thoughtful essay. Please read it all.

Finding out what’s in it: Florida citizens will see massive hikes in their healthcare premiums in 2015 because of Obamacare.

These hikes will also be accompanied by narrower networks and poorer service. Ain’t Obamacare grand?

Hamas breaks ceasefire in only 90 minutes
August 1, 2014 at 9:35 am Robert Zimmerman Points of Information

So, isn’t it nice that Israel abandoned Gaza to give them a chance to build their own state?

EPA funnels cash to Democrats
August 1, 2014 at 9:29 am Robert Zimmerman Points of Information

Working for the Democratic Party: A new report finds that the EPA has been directly funneling government funds to Democratic activists in the environmental movement.

Finding out what’s in it. Premiums continue to rise, and numerous insurance policies continue to be cancelled, all because of Obamacare.

Writing in Forbes, Manhattan Institute health-policy analyst and NRO contributor Avik Roy discovered that in 3,137 of America’s 3,144 counties, Obamacare has hiked 2014 individual-market premiums by an average of 49 percent. Women saw rates increase in 82 percent of U.S. counties, while they rose in 91 percent of counties for men. Although some have benefited from Obamacare’s subsidies, Roy writes, “Those who face higher premiums, higher taxes, or both, appear to outnumber those whom the law has made better off. That alone isn’t a test of the law’s virtue — but it is a measure of the law’s failed promise.”

The article also describes the cancellation of insurance policies in numerous states, despite Obama’s oft-repeated promise that “if you like your plan you can keep your plan. Period.”

The Feds steal cars
August 1, 2014 at 9:17 am Robert Zimmerman Points of Information

The story has this very interesting tidbit: According to the owner of one vehicle “had spent considerable money ensuring her vehicle would pass inspection laws and that it was in compliance with emission rules.” Nonetheless, the feds showed up at her door and took the vehicle.

Some good news: The Sudanese Christian woman who had been threatened with execution because she would not renounce her religion has finally escaped Sudan, arriving in the United States on Thursday.

Go to the link for some joy. Despite the efforts of some in this country to destroy its fundamental freedoms, it still remains the world’s haven for the huddled masses yearning to breath free.

Flying a glider to the edge of space
August 1, 2014 at 8:58 am Robert Zimmerman Points of Information

A new project, backed by Airbus, will attempt to fly a manned glider to 90,000 feet, almost doubling the previous altitude record.

The competition heats up: Generation Orbit this week completed a test flight of its air launch rocket system for putting small payloads into space.

The flight was to test the handling and flight characteristics of the aircraft to be used to release the launchers.

The company is planning two different air-launched systems, one to put small payloads into suborbital space, another to put 100 pound payloads into orbit. In both cases they are targeting the science and educational community that builds cubesats and has been in desperate need of its own launch services for decades.

The competition heats up: The massive concrete launchpad structure for Russia’s Soyuz rockets at its new spaceport in Vostochny is now almost finished.

Nor is that the only thing getting built.

Also, official Russian TV showed the installation of giant cisterns for kerosene fuel, liquid oxygen and nitrogen gas at a nearly completed storage facility of the launch complex. The active construction of 12 residential buildings, of a kindergarden, of a boiler facility and of a water treatment plant was also continuing at the future space center. A new concrete-production plant, a power conversion station and a car park were reported approaching completion. During the summer, regular workforce was reinforced with 400 members of 22 student teams assembled at the site from 15 regions of the Russia, the local government said.

The head of Russia’s space agency also visited the site this week, demonstrating the government’s continuing strong commitment to get this new spaceport finished on time.

Update: In related news, sources in Russia’s Finance Ministry say that by 2016 the budget for Baikonur will be zeroed out, the money shifted entirely to running Vostochny. This is the first solid indication that Russia plans to abandon its historic Kazakhstan spaceport when the new spaceport is finished. Previously officials insisted that Russia was going to continue its partnership with Kazakhstan. 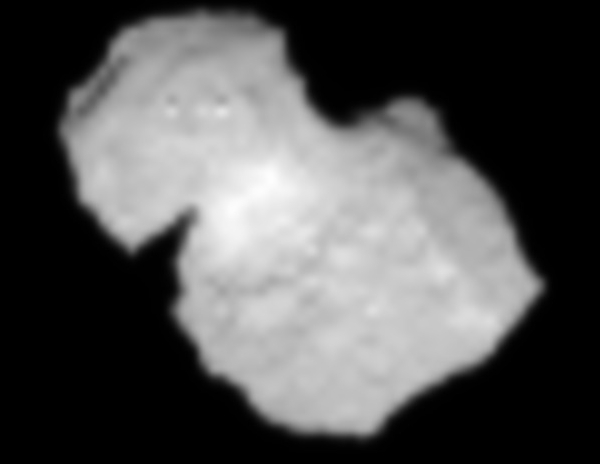 This image of Comet 67P from Rosetta was taken yesterday. Though it has not been processed like the image I posted yesterday, more details continue to come out as the spacecraft each day gets closer to the comet. This image was taken from a distance of 825 miles, 375 miles closer than the previous day.

Very soon these close-up images will become too large to show the entire nucleus in one image. Rosetta will instead begin to snap images of specific features.