Astronomers have discovered the most massive black hole yet discovered, having a mass 40 billion times the mass of our Sun.

The new data obtained at the USM Wendelstein observatory of the Ludwig-Maximilians-University and with the MUSE instrument at the VLT [Very Large Telescope in Chile] allowed the team to perform a mass estimate based directly on the stellar motions around the core of the galaxy. With a mass of 40 billion solar masses, this is the most massive black hole known today in the local universe. “This is several times larger than expected from indirect measurements, such as the stellar mass or the velocity dispersion of the galaxy,” remarks Roberto Saglia, senior scientist MPE and lecturer at the LMU.

The light profile of the galaxy shows a centre with an extremely low and very diffuse surface brightness, much fainter than in other elliptical galaxies. “The light profile in the inner core is also very flat,” explains USM doctoral student Kianusch Mehrgan, who performed the data analysis. “This means that most of the stars in the centre must have been expelled due to interactions in previous mergers.”

A evening pause: Performed live December 3, 2014 at the Udvar-Hazy Center of the Air & Space Museum in Virginia. They call this a flash mob but it isn’t, since the crowds clearly know what is about to happen. The music however is wonderful, and makes for a nice start to the holiday season. 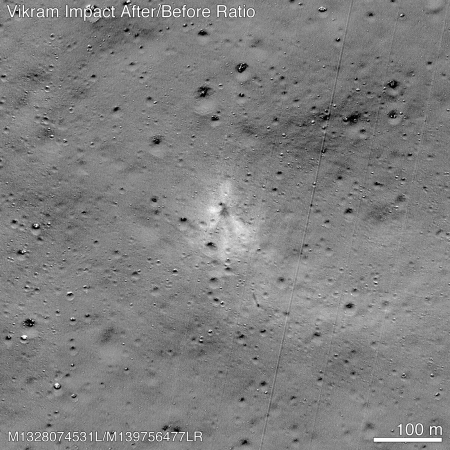 Using a mosaic of Lunar Reconnaissance Orbiter (LRO) images, citizen scientist Shanmuga Subramanian located on the Moon the debris and impact point for India’s Vikram lander that crashed there in September, an identification that has since been confirmed by LRO scientists.

The image on the right, reduced to post here, has been modified by the scientists to bring out the features that changed before and after the impact.

After receiving this tip the LROC team confirmed the identification by comparing before and after images. When the images for the first mosaic were acquired the impact point was poorly illuminated and thus not easily identifiable. Two subsequent image sequences were acquired on 14, 15 October and 11 November. The LROC team scoured the surrounding area in these new mosaics and found the impact site (70.8810°S, 22.7840°E, 834 m elevation) and associated debris field. The November mosaic had the best pixel scale (0.7 meter) and lighting conditions (72° incidence angle).

The debris first located by Shanmuga is about 750 meters northwest of the main crash site and was a single bright pixel identification in that first mosaic (1.3 meter pixels, 84° incidence angle). The November mosaic shows best the impact crater, ray and extensive debris field. The three largest pieces of debris are each about 2×2 pixels and cast a one pixel shadow.

No word yet on what this new information reveals about Vikram’s failure.

Cool image time! In digging through the new images that come down from the high resolution camera on Mars Reconnaissance Orbiter (MRO), my reaction sometimes is “What the heck caused that?”

That was my reaction when I looked at the image to the right, cropped to post here.

The full image, taken on October 6, 2019, shows the floor of one of the many north-south fissures found in the volcanic Tharsis Bulge west of Valles Marineris and east of Olympus Mons. The fissures are caused when the crust is pushed upward by volcanic pressure, causing the surface to crack.

In this case the mystery is that patch of east-west ridges at the bottom of this somewhat wide fissure. While they might be dunes, they do not resemble dunes, as they have a rigid and somewhat sharp appearance. More puzzling is their somewhat abrupt appearance and disappearance. Except for its northern end, the edges of the patch are so sharply defined. If these were dunes you’d think they’d fade away more gradually.

Could the ridges be a more resistant subsurface feature slowly being revealed as surface material erodes away? Sure, but their orientation is completely opposite to the north-south fissures that dominate this region. One would expect deeper features to reflect that same general orientation. These ridges do not.

This image was dubbed a “Terrain Sample,” which means it was taken not because of any specific research goal, but because the scientists who run MRO’s high resolution camera had a gap in their schedule and needed to take a picture to maintain the camera’s proper temperature. In such cases they often take somewhat random images, not knowing what they will find. In this case they struck geological gold, a mystery that some postdoc student could spend a lot of time analyzing.

The New Horizons science team today released data that confirms that, as theorized, the speed of the solar wind decreases as it travels farther from the Sun.

As the solar wind moves farther from the Sun, it encounters an increasing amount of material from interstellar space. When interstellar material is ionized, the solar wind picks up the material and, researchers theorized, slows and heats in response. SWAP [an instrument on New Horizons] has now detected and confirmed this predicted effect.

The SWAP team compared the New Horizons solar wind speed measurements from 21 to 42 astronomical units to the speeds at 1 AU from both the Advanced Composition Explorer (ACE) and Solar TErrestrial RElations Observatory (STEREO) spacecraft. (One AU is equal to the distance between the Sun and Earth.) By 21 AU, it appeared that SWAP could be detecting the slowing of the solar wind in response to picking up interstellar material. However, when New Horizons traveled beyond Pluto, between 33 and 42 AU, the solar wind measured 6-7% slower than at the 1 AU distance, confirming the effect.

The data also suggests that New Horizons could exit the heliosphere and enter interstellar space as early as sometime in the 2020s.