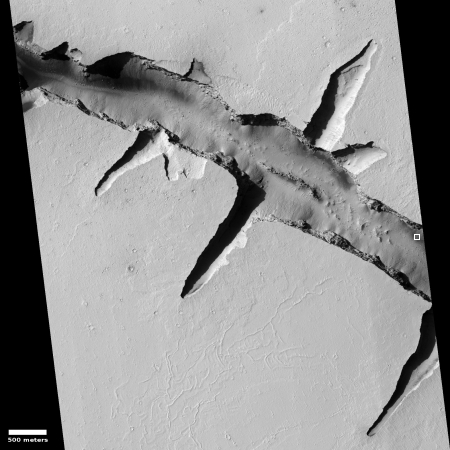 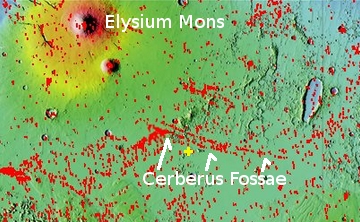 The young age of Cerberus Fossae is dramatically illustrated by the wider mosaic below, showing the entire crack. 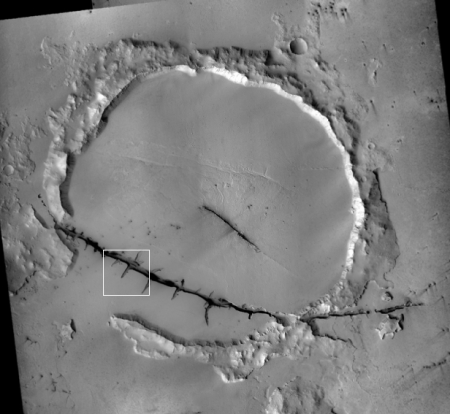 Mosaic made from images here, here, and here.

The crack cuts across and within an ancient and significantly eroded crater that appears to have been partly buried. From this we can guess the following sequence: First we had the impact. This was followed by extensive and massive lava flows that not only ponded within the crater but also were strong enough to cut through and destroy the southwest part of the crater rim.

At first glance one could also assume this image was taken to track the canyon’s erosion as well as the possibility of avalanches and boulder falls on canyon’s steep cliffs, as was the case in my previous Cerberus Fossae MRO image post. That assumption would also be incorrect. The photograph was taken as part of a major monitoring program involving a completely different Martian geological feature, dubbed by planetary scientists with the very uninteresting name of recurring slope lineae or RSLs.

Lineae are important because they vary seasonally from year to year on steep slopes in the Martian mid-latitudes, growing during the summer and fading during the winter, behavior that strongly suggests the presence of melting liquid water.

David Stillman of the Southwest Research Institute in Colorado had requested this particular image as part of that monitoring program. He had wanted to see if the 2018 global dust storm had caused any changes to the lineae. 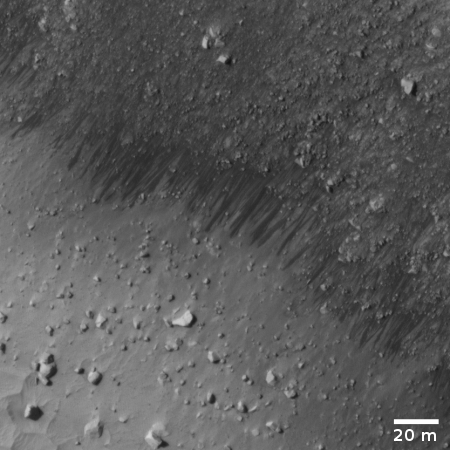 The image to the right shows the area indicated by the small white box in the first image above, but was taken in 2008 after an earlier dust storm. Then the lineae were distinct and obvious, as shown in this image,

After last year’s global dust storm, Stillman asked for the new image above of the canyon to see if the lineae had darkened again, as they did in 2008. Surprisingly they did not. “This is peculiar because there are some locations that had huge RSL activity after the 2018 dust storm, but others that are similar to this site,” Stillman explained. “Why do these features behave differently? I wish I knew.”

Stillman has found a lot of lineae in the cracks in Cerberus Fossae. “Are these formed via water release or dry process?” he wonders. “Again I wish I knew.”

According to Stillman the MRO scientist team is monitoring almost a thousand different recurring slope lineae sites, studying their seasonal changes to test a variety of theories about their formation, a process that remains very baffling.

For example, the lineae in this canyon are located on the scree slope of material that has fallen from the vertical cliffs above. Yet, the lineae’s have nothing to do with that scree or any avalanche using that material. As Stillman notes, “What is interesting is that the lineae are albedo features. Over six Martian years of monitoring, we have not observed any material movement. Lineae are either dark because they are wet or because they remove a bit of dust off the surface.”

Like slope streaks, a different type of slope feature, these features appear to be a geological process that is unique to Mars. And like slope streaks, they remain a mystery that scientists have not yet solved.