The mysterious slope streaks of Mars The uncertainty of science: In the past decade or so scientists have documented in detail a number of features on the Martian surface that evolve or change over time. From the constantly changing poles to the tracks of dust devils to landslides to the appearance of seasonal frost, we have learned that Mars is far from a dead world. Things are happening there, and while they are not happening as quickly or with as much energy as found on Earth, geological changes are still occurring with regular frequency, and in ways that we do not yet understand.

Of the known changing features on Mars, two are especially puzzling. These are the two types of changing streaks on the slopes of Martian cliffs, dubbed recurring slope lineae (referred as RSLs by scientists) and slope streaks.

Lineae are seasonal, first appearing during the Martian summer to grow hundreds of feet long, and then to fade away with the arrival of winter. Their seasonal nature and appearance with the coming of warm temperatures suggests that water plays a part in their initiation, either from a seep of briny water or an avalanche of dust. Or a combination of both. The data however does not entirely fit these theories, and in fact is downright contradictory. Some studies (such as this one and this one) say that the seasonal lineae are caused by water. Other studies (such as this one and this one) say little or no water is involved in their seasonal formation.

The answer remains elusive, and might only be answered, if at all, when Curiosity takes a close look at two lineae in the coming years.

Slope streaks however are the focus of this post, as they are even more puzzling, and appear to possibly represent a phenomenon entirely unique to Mars. I became especially motivated to write about these mysterious ever newly appearing features when, in reviewing the May image release from the high resolution camera on Mars Reconnaissance Orbiter (MRO), I found four different uncaptioned images of slope streaks, all titled “Slope Stream Monitoring.” From this title it was clear that the MRO team was re-imaging each location to see if any change had occurred since an earlier image was taken. A quick look in the MRO archive found identical photographs for all four slope streak locations, taken from 2008 to 2012, and in all four cases, new streaks had appeared while older streaks had faded. You can see a side-by-side comparison of all four images below the fold. 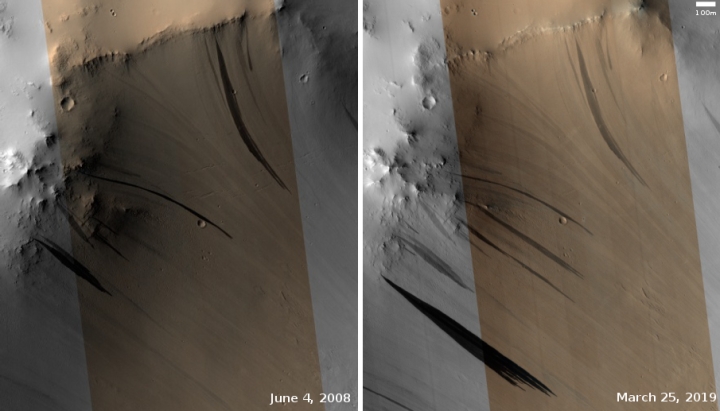 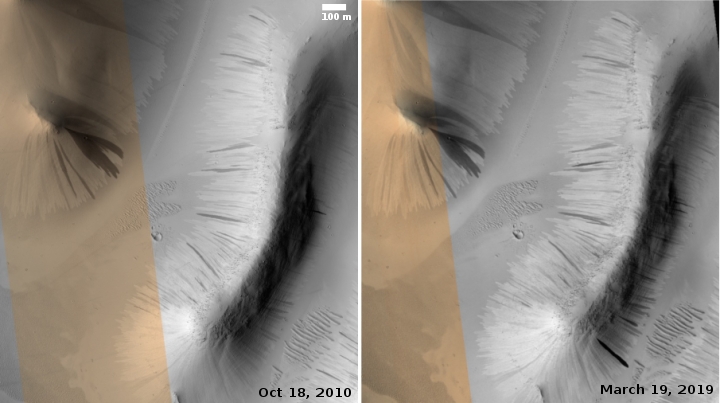 While locations 1, 3, and 4 have completely new streaks appearing next to old ones, location 2 has one new streak flowing down on top of older streaks.

In reporting on the papers about slope streaks presented during the 50th Lunar and Planetary Science Conference in Texas in March, one presentation [pdf] defined slope streaks tersely as:

…gravity-driven dark or light-toned features that form throughout the martian year in high-albedo and low-thermal-inertia equatorial regions of Mars. The distinctive features originate from point sources on slopes steeper than ~20°, follow the topographic gradient, extend or divert around small obstacles, and propagate up to maximum lengths of a few kilometers. The streaks brighten with time, sometimes become brighter than their surroundings, and fade away over timescales of decades. [emphasis mine]

I wanted to learn more, and contacted one of the authors of this paper, Misha Kreslavsky of the University of California in Santa Cruz. He then forwarded me a lot of new information and research work, which revealed the following very intriguing details:

The initial theories for explaining slope streaks suggested they were caused by some sort of groundwater discharge or liquid brine flow. This has been rejected by many scientists because too many slopes originate in locations where there simply wouldn’t be a sufficient aquifer of any kind, such as on isolated mesas and hills. Moreover, these theories required that the streaks be linked to the underlying geology, a link that further research has found to not exist.

The most accepted formation theory today is that of a dust avalanche. The disturbance at the origin causes surface dust to travel downward, either exposing the darker surface below or changing the surface sufficiently to change its brightness.

The problem with this theory is that some streaks travel considerable distances along very gentle slopes. There simply isn’t enough inertia for the dust fall to propagate that far.

A newer theory for explaining the slope streaks calls for the downward percolation of a brine of chloride and/or perchlorate in a thin layer several inches thick close to the surface. This layer develops in the warmer months as the subsurface ice melts. Once triggered by some surface event, the brine percolates down the slope, the flow accelerating because it picks up more brine droplets along the way. Think of water droplets on your car window. As they slowly drip down, different drops often merge to accelerate the flow, leaving behind a chain of droplets along its path. The surface darkening that makes the slope streaks visible would result from microscopic changes in the surface, along with the capture of new dust by the brine.

The problem with this theory is that it requires streak formation to be more closely tied to the seasons, something it is not.

Some scientists have suggested that some form of both processes might be occurring, with some streaks formed by dust avalanches and others by brine percolation. Either case, however, requires some physical and chemical process that is not seen on Earth, and is not completely understood.

The bottom line, as noted in one paper, “The processes that form slope streaks remain obscure. No proposed mechanism readily accounts for all of their observed characteristics and peculiarities.”

Mars is strange. Mars is alien. Mars epitomizes the universe in all its glory.