COVID-19 is NOT going to overwhelm our healthcare system

As part of the panic that has been overwhelming the world because of COVID-19, one of the typical lies that is being spread is that the epidemic is going to overwhelm the world’s healthcare systems. This CNN article from yesterday, entitled “‘That’s when all hell broke loose’: Coronavirus patients start to overwhelm US hospitals”, is typical:

“We ended up getting our first positive patients — and that’s when all hell broke loose,” said one New York City doctor.

The doctor, who spoke to CNN on condition of anonymity out of concern for his job, described a hospital that was woefully unprepared for an influx of Covid-19 patients that started roughly two weeks ago — which has already stretched the hospital’s resources thin and led to severely ill patients outnumbering ventilators.

“To think that we’re in New York City and this is happening,” he added. “It’s like a third-world country type of scenario. It’s mind-blowing.” [emphasis mine]

Not! To dispell these mainstream media lies, I am going to give my readers an example of what a real journalist does, in comparison to the brainless non-researchers at CNN (and elsewhere) who make believe they are journalists but instead play them, on television and cable each day, in order to push an anti-American and leftist agenda that is downright evil and destructive.

I’m going to do some real research, and provide it to my readers so that they can get some context and a deeper understanding of the fake Wuhan flu “pandemic.” 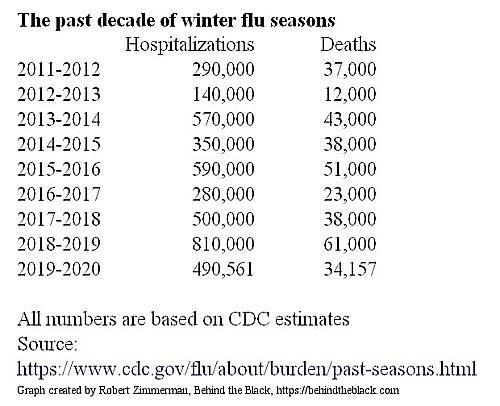 To the right is a graph I have put together using the actual estimates of flu hospitalizations and deaths in the United States since 2011 that have been gathered by the Centers for Disease Control and Prevention (CDC). As you can see, last year’s flu season (2018-2019) was the worst in the U.S. in the past decade (and the worst according to the CDC for decades), with about 810,000 people requiring hospitalization and approximately 61,000 individuals dying from the flu. Even so, the numbers were not far different from previous flu seasons, with the average hospitalizations since 2011 ranging from 140,000 to 590,000, with deaths generally averaging just under 40,000 per year

During the past decade therefore the American healthcare system was apparently able to handle numbers like this quite capably, without bodies piling up in the street or in the hallways of hospitals. 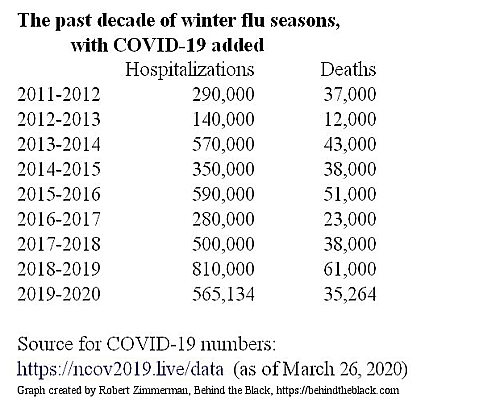 Notice anything? Yup, you got it. The totals hardly go up, and are in fact quite within the proven capabilities of the American healthcare system. As I’ve noted earlier, the Wuhan virus is a relative pinprick when compared with the annual flu season. Compared for example to the swine flu epidemic in 2009-2010, when the CDC estimated 274,304 hospitalizations and 12,469 deaths, the numbers for Wuhan are so far relatively small.

Now, we all know that the Wuhan epidemic is still in its early stages in the U.S. and therefore these numbers will certainly rise, quite possibly exceeding the swine flu numbers from 2009-2010. In the end however I am quite willing to bet that they will not rise much higher than what was seen in 2018-2019, or in 2009-2010, years where no lockdowns occurred, no one exercised social distancing, no panics occurred, and if you had suggested imposing martial law you would have been laughed out of the room.

Meanwhile, our brainless Congress is about to pass a $2 trillion COVID-19 stimulus bill, printing money like it grows on trees, that includes about $150 billion in money for hospitals as well as $130 billion in low interest loans for hospitals.

If only some journalists in our country were more interested in providing some facts, rather than foreboding and wild predictions based on emotional rants from anonymous sources, maybe then our society would not be going insane, and our Congress might not be running around like a chicken without its head, passing bills we can’t afford and possibly don’t need.