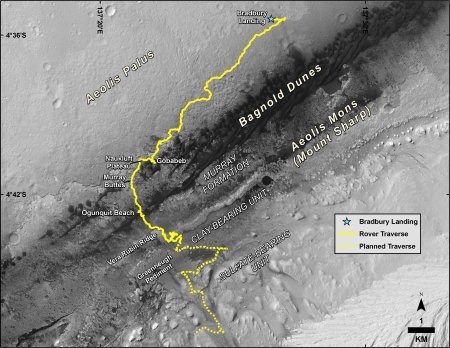 The Curiosity science team has released a new map showing an update of their planned route for Curiosity in the coming year or so, showing how they plan on leaving Gediz Vallis Channel after spending some time exploring the numerous geological layers exposed on its eroded surface.

The new information in this map is the route near the bottom of the image, showing more precisely the route up the canyon and then their retreat through the gap in the canyon’s western wall.

To get a better idea of what this means, I have updated my annotations on this Mars Reconnaissance Orbiter image of Gediz Vallis Channel, posted previously in my May 30, 2019 rover update. 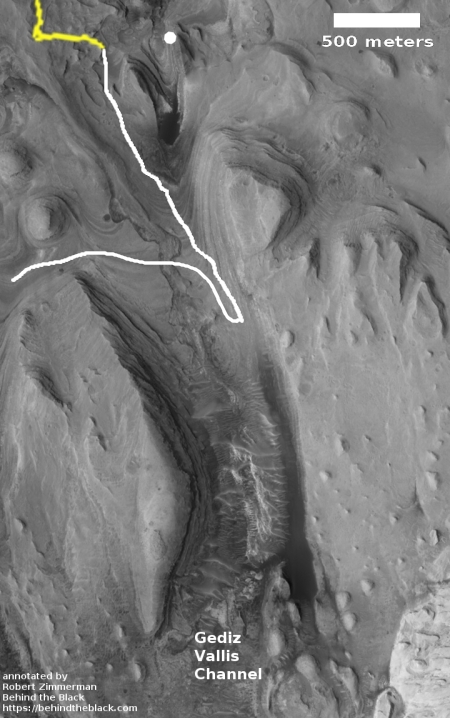 This new route information shows that they have spent a lot of time analyzing the terrain in Gediz Valles to determine exactly where the rover can go safely, while simultaneously giving them the best science. As I have noted previously,

You can see from the image that the rover will be traversing numerous layers in a very short time while in Gediz Vallis, which means they might spend a very long time there.

At the same time, it is also going to probably be at least two years before they get there. Beforehand they have two recurring slope lineae to study (the second of which is indicated by the white dot), both of which might contain evidence of underground water seeping up to the surface.

At this moment the rover, as well as all the orbiters at Mars, are about to enter solar conjunction, a period of about two weeks when communications are cut off because the Sun is between the Earth and Mars.

This happens once every two years, the last time being August 2017. Then, Curiosity had not yet climbed up onto Vera Rubin Ridge, where then spent the better part of these past two years exploring the geology there.