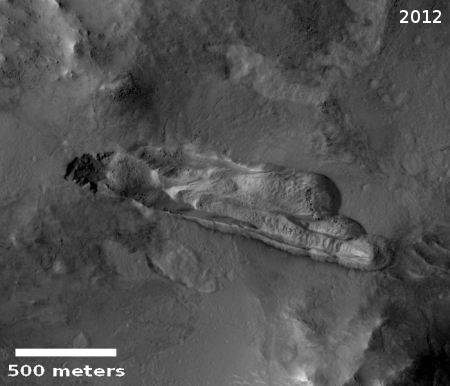 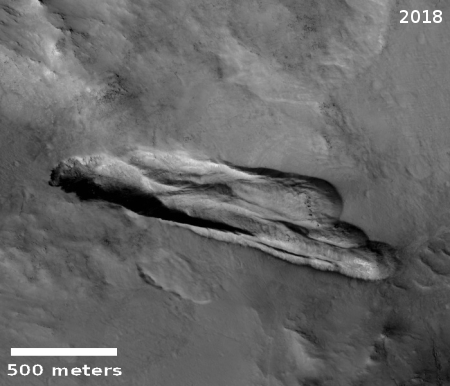 Time for two cool images! To the right are two images taken by the high resolution camera on Mars Reconnaissance Orbiter (MRO), the top one taken in April 2012, and the bottom taken in December 2018. Both have been cropped and reduced slightly in resolution to post here.

The second image is trying to answer, in only a small way, one of the most fundamental questions of the Martian environment: How fast does it change? The images from orbit have periodically seen evidence of new impacts. MRO images have tracked dust devil tracks. And we know that somehow water, ice, wind and volcanic activity have eroded and reshaped the surface over eons.

What we don’t know truly and with detail is the pace of these changes, with any accuracy. The pace of some things over time seems obvious. For example, Mars’s inactive but gigantic volcanoes suggest that once volcanism was very active, but over time has ceased so that today it is unclear if any is occurring. Similarly, the geological evidence suggests that in the far past water flowed on the surface, producing catastrophic floods. Now that liquid water is all but gone, and this erosion process as ceased.

Still, underground ice and water, plus the weather of the thin Martian atmosphere, continue to work their will on the surface. It remains somewhat uncertain however how quickly these processes reshape things. In addition, we do not yet know if Mars has quakes on a regular basis, though InSight will hopefully answer that question. Recent research looking at fallen boulders in some of Mars’ steep fissure canyons has suggested periodic and localized quake activity, but these results are not conclusive or certain. 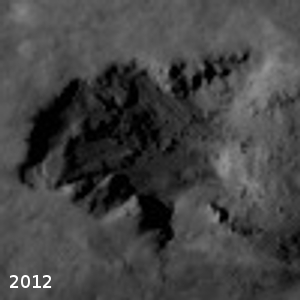 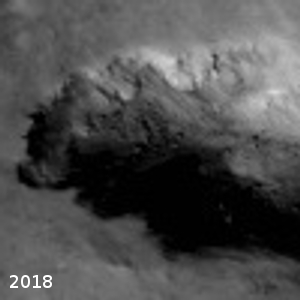 The images above and also on the left (showing at full resolution the origin of the landslide) look at the same fresh-looking landslide and were taken six years apart. They are an attempt to see if such features change, as they would on Earth after three years of seasonal swings in temperature and weather. Because the lighting is different between the two images it is difficult at first glance to see if anything has really changed, though the different lighting will allow geologists to better determine the shapes and sizes of these features, which in itself is important in spotting changes.

The lighting differences however do cause problems. For example, in the close-ups to the right the rim of the south cliff wall seems at first glance to retreated southward, as if sections have collapsed. A closer look suggests instead that the areas that seem gone in the bottom image are merely at a lower elevation in both. The sunlight simply hasn’t illuminated them in the 2018 image.

Yet, it is possible this canyon rim has slumped in the past eight years. It will take far more careful analysis than I can do however to clarify this.

The landslide itself is interesting, in that it is located on the high side of the transition zone between the southern highlands and the northern plains (where that intermittent ocean is believed to have once existed). The landslide itself is on the northwest rim of a crater, and is flowing down into the crater floor. It has the look of a mud flow, as if the material in the crater wall was saturated with water and thus flowed almost like viscous molasses.

In fact, in many ways it closely resembles the gravitational collapse described in the research paper [pdf] I highlighted on January 29, 2019, that analyzed the evidence of water in deep craters that also suggested the presence of a planet-wide underground ice table.

One wonders whether this slide suggests the presence of water ice here as well. We shall have to wait and see what the scientists tell us.