UPDATE: In doing some analysis and prep work for future updates, I have discovered that the graph below is in error in its placement of the prediction for the next solar maximum in 2025. I have revised the graph below to note the error. On April 6, 2020 I posted an updated graph.

My original post:
—————————
This week NOAA unveiled a major revamping of the graph it has used for the past decade-plus to show the monthly progression of the sunspot cycle, and that I have been using since the start of this website to do my monthly sunspot updates.

Overall they did a very nice job. The new graph not only shows the present state of the cycle, but it allows you to zoom in or out on this cycle as well as all sunspot cycles going back to 1750, about the time the sunspot cycle was first recognized and the sunspot count became reliable.

The new graph also includes a new more precise prediction for the upcoming solar cycle, forecasting the peak in 2025, higher than the weak solar maximum that has just passed. I have taken the old graph (see my last update on March 12, 2020) and revised it to place this new prediction in context with the previous cycle. I have also added the March sunspot numbers to it. 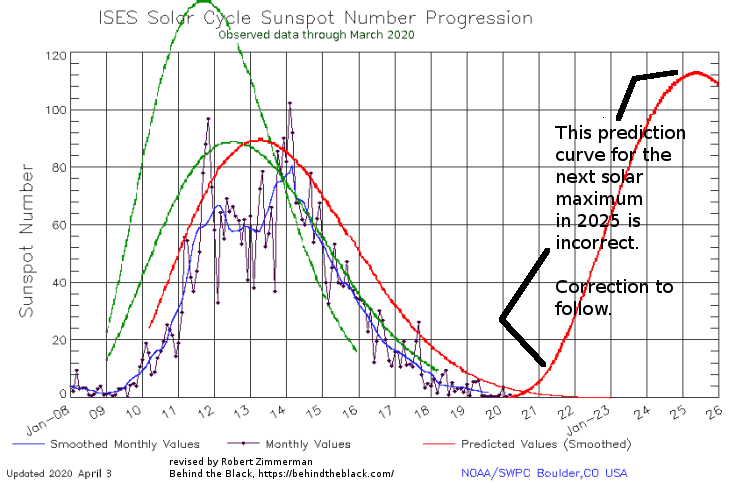 The graph above has been modified to show the predictions of the solar science community for both the previous and upcoming solar maximums. The green curves show the community’s two original predictions from April 2007 for the previous maximum, with half the scientists predicting a very strong maximum and half predicting a weak one. The red curve through 2020 is their revised May 2009 prediction. The red curve after 2020 is the new prediction, first posted by NOAA in April 2020. 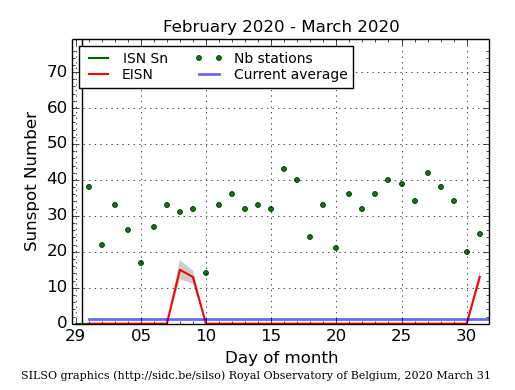 Despite the high prediction for the 2025 maximum, the overall paucity of sunspots over the last year has continued, with March having only two sunspots, as indicated by the SILSO graph to the right. Both spots had magnetic polarities linking them to upcoming solar maximum, not the older now fading cycle.

Since June 2019 the Sun has averaged between one or two sunspots per month, with the number of spots linked to the new cycle steadily increasing over time. Though the numbers remain tiny, far lower than seen during the last solar minimum — considered the deepest and longest in a century — the new cycle sunspots strongly suggest we will have a solar maximum in the next five years, rather than experience a grand minimum with no sunspots for decades.

The new NOAA graph also makes it very easy to compare today’s minimum with all past minimums. A quick scan shows that we had similar blank stretches during the 1810, 1823, and 1912 minimums. In both centuries we saw two consecutive weak maximums linked to these deep minimums. All this suggests to me that the next maximum will be weak too. Some scientists agree, with some not discounting the possibility of a grand minimum.

Tracking and predicting the strength of the sunspot cycle is not a subject merely of interest to nerds. It bears importance to the entire climate change debate, as there is circumstantial evidence that a long term lack of sunspots results in a cooling of the climate on Earth. During the last grand minimum in the 1660s we experienced what has been dubbed the Little Ice Age, with failed crops, famines, and years with no summer. Similarly, in the weak maximums early in the 1800s and 1900s, as well as the weak minimum in 2009, the global temperatures appeared to drop as well.

The link between the Sun and these cool periods however is still not confirmed. Other factors, such as major volcanic eruptions, could have brought on some of those cool periods. If the Sun however did cause those periods of cooling, than all climate models predicting global warming will need to be rewritten, since most do not factor in any solar fluctuations. In fact, they all assume a constant Sun, something that might not be true.

All remains uncertain however. All we really can do is continue observations and try to learn more.

But then, isn’t that what real science is always about?