After spending more than three months at a single site, drilling three different holes in the same rock, Curiosity is finally on the move again, heading east and uphill toward Mt. Sharp. Yutu-2 meanwhile continues its very slow journey on the far side of the Moon. And the new rovers are halfway to Mars. 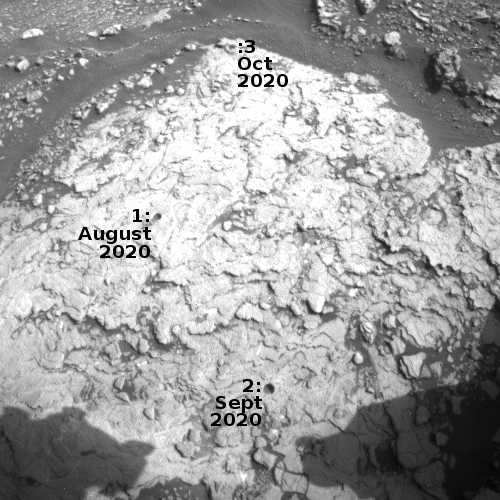 The image to the right, cropped and annotated to post here, shows the three drill holes that scientists had Curiosity drill in this one pavement rock, dubbed Mary Anning and located in the clay unit within Gale Crater on Mars. As I noted in my last update on July 22, 2020, the rover’s science team had made a specific detour in their planned route up Mt. Sharp in order to find this one last place to drill in this geological unit.

Though they have been very quiet about their results, apparently what they found in this one pavement rock was important enough that it required three drill holes. In addition, samples from the second hole were subjected to two of Curiosity’s limited supply of wet chemistry experiments. From the science team’s August 28, 2020 update:

Studying the clay-rich rocks of Gale Crater is one of the reasons it was chosen as the landing site for our rover. Curiosity has spent eight years driving and searching for a rock sample that is the best choice for using a precious and expendable resource of the SAM instrument: tetramethylammonium hydroxide, or TMAH for short. SAM flew to Mars with two of its sample cups containing a tiny amount of this special compound, which makes it easier for the SAM instrument to detect the organic (carbon-rich) compounds in the rocks that could help us understand whether the necessary ingredients for life were present in Gale Crater when it was better termed “Gale Lake.”

This weekend, we will conduct a dry run of the TMAH experiment to finetune the procedures and make sure everything goes smoothly when we drop off a tiny bit of powdered rock from our upcoming drill hole (on the same piece of bedrock as the Mary Anning drill hole) into one of the two TMAH-containing sample cups. If all goes well, when we conduct the experiment for real in the sols ahead, we’ll get a fascinating view into the chemistry of Gale Lake.

That experiment was not only successful, its results were apparently intriguing enough that the science team decided to do a second wet chemistry experiment on the samples from this second drill hole:

The first experiment was run with the reagent tetramethylammonium hydroxide (TMAH), and the second will be run with the reagent N-methyl-N-(tert-butyldimethylsilyl)trifluoroacetamide (MTBSTFA) – shout out to Sol 2880 (link to that blog) blogger Ryan Anderson for these names! These are called wet chemistry experiments because SAM adds a liquid reagent to the sample before they analyze it. Each reagent reacts differently with the sample, so each experiment shines a slightly different light on what carbon-bearing compounds lie within the sample.

Based on the results of this second wet chemistry experiment, the science team decided to drill a third hole in this same pavement rock, this time to focus on an area where they saw “dark grey nodule”. That they named this third drill hole “Groken”, inspired by the verb “to grok” that Robert Heinlein invented in his book Stranger in a Strange Land, was most tantalizing. As they noted in their October 7, 2020 update:

Broadly, “to grok” means to understand a topic deeply, intuitively, and empathetically, which has been the goal of the Curiosity rover mission since the beginning! We’re hoping that our study of the Groken drill target will allow us to grok the ancient history of Mars in a little more detail!

They have not yet revealed what they found. That they did three holes and two wet chemistry experiments at this one site, and named the last thusly, suggests they found something really interesting. If the data is especially spectacular, my guess is we will see a big press announcement sometime in the next three or four months. If revealing but not spectacular, expect the press release in about a year. 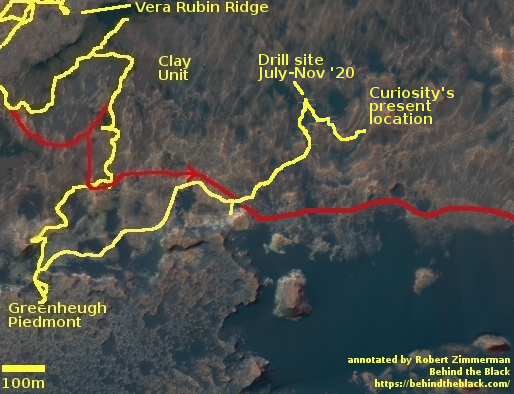 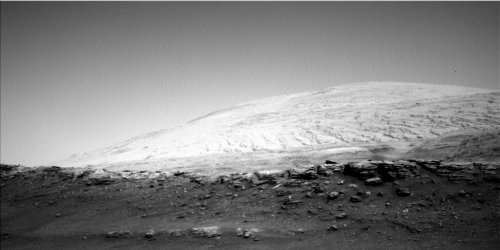 The map to the right shows the rover’s present position after leaving the Mary Anning drill site. The red line indicates the planned route. To return to it the science team is having the rover work its way up the series of terraces or benches in this area. Though they plan to pause periodically to gather data along the way, they should be moving now much more quickly and steadily to the east. From their most recent update today:

And all the while, we’re keeping our eyes on the prize: the layers of brighter rocks towering in the image [to the right]. As one of the mission’s Long Term Planners, it is my job to remind the team about the big-picture strategic plan to explore Mt. Sharp. So, even amidst these enigmatic rock benches, we will continue moving expeditiously towards the sulfate-bearing unit higher up the mountain. The scenery here is stunning – but the best is yet to come!

To get an idea how stunning the future scenery will get, read my August 24, 2019 post on Curiosity’s future travels. The rover is about to finally leave the foothills of Mt Sharp, and climb into one of the canyons of its lowest slopes.

On the Moon, China’s rover Yutu-2 and lander Chang’e-4 have both awakened for their 24th lunar day, having far exceeded their planned life of three months exploring the far side of the Moon. The rover has traveled about 1,800 feet from the lander in the almost two years it has been there, generally moving to the northwest.

Meanwhile, both China’s Tianwen-1 spacecraft, carrying that nation’s first Mars rover, and the U.S.’s Perseverance rover, are functioning nominally on their journey to Mars. Perseverance in fact about halfway there, with a planned landing on February 18, 2021 at 12:43 pm (Pacific).

China’s rover won’t land until sometime in May, as they will first put the spacecraft in orbit in February to do several months of reconnaissance of their landing site.