The uncertainty of science: Time for our monthly update of the Sun’s on-going sunspot cycle. Below is NOAA’s April 1, 2021 monthly graph, showing the Sun’s sunspot activity through the end of March 2021. I have annotated it as always to show the previous solar cycle predictions.

The higher than expected sunspot activity that has been occurring almost from the moment the ramp up to solar maximum began in 2020 continued in March. The numbers weren’t as high as they were in December and January, but they were still higher than the predicted sunspot number. 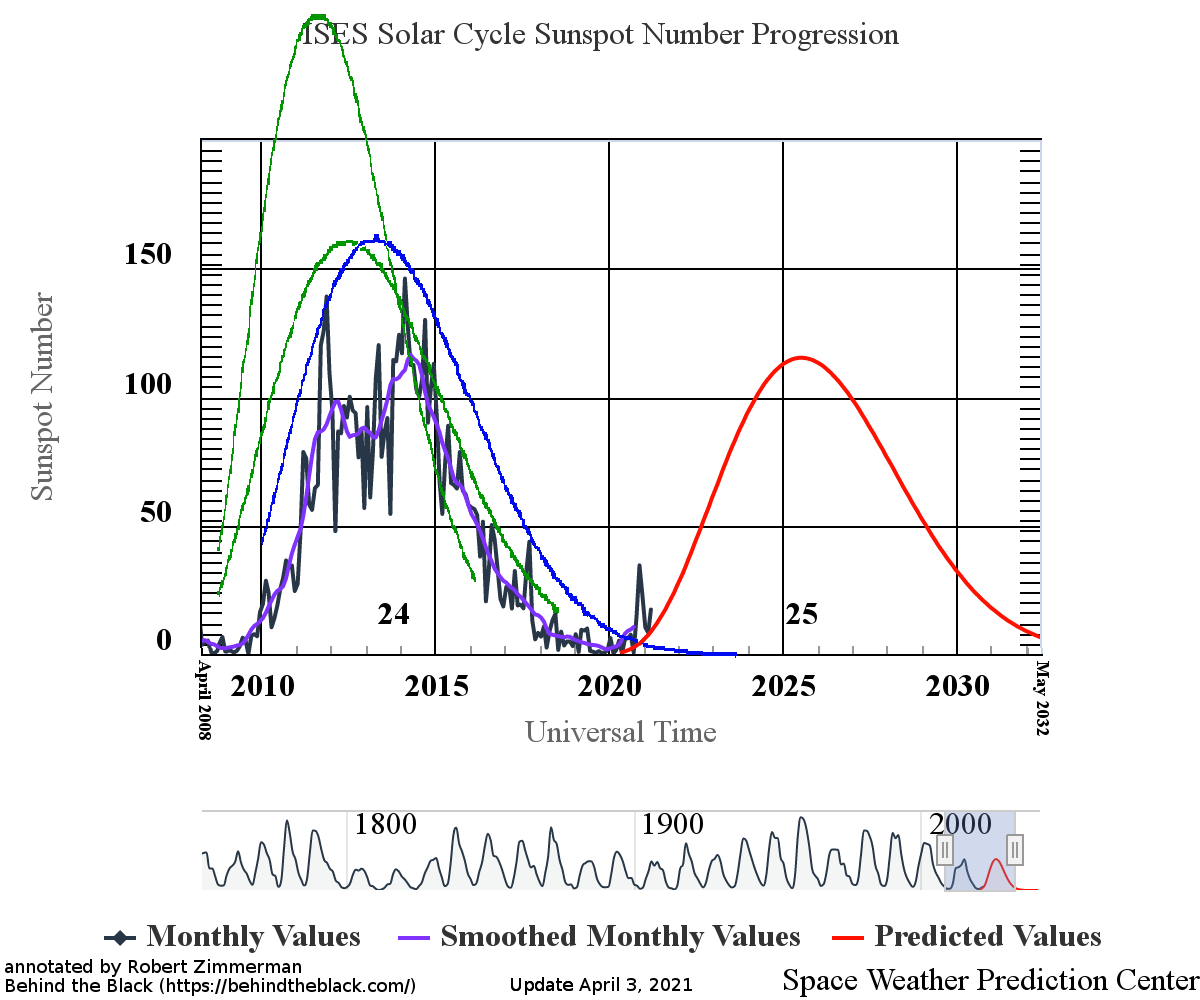 In last month’s update I said that it was too soon to come to any conclusions about the strength of the next solar maximum, despite these higher numbers. That conclusion still holds, though the longer solar activity continues at these high numbers the more it points to a much more active solar maximum than predicted by NOAA’s panel of solar scientists.

What the Sun is actually demonstrating right now is exactly how little we really know. At the end of the solar minimum a handful of scientists had predicted there would be no upcoming solar maximum at all, based on the previous weak maximum and the two deep and prolonged minimums that surrounded it. That prediction now appears to have been completely wrong.

The solar scientists from NOAA, as indicated by the red curve above, are predicting a relatively weak solar maximum, comparable to the weak maximum seen in 2009. While this prediction, which probably represents the majority opinion of the solar scientist community, is still quite possible, the higher than predicted sunspot activity since the start of 2020 suggests the majority opinion might end up wrong also. Note too that this same majority opinion was wrong about its last solar maximum prediction, as shown by the green and blue curves. First they made two predictions, one high and one low (the green curves). Then they jumped on the bandwagon of the low prediction, after adjusting its time frame to better match the arriving data (the blue curve). And even this last very late prediction ended up too high.

Meanwhile, one solar scientist has predicted a strong upcoming solar maximum, as much as two times stronger than NOAA’s prediction. And though the activity has been higher than the NOAA prediction, it is far less active than this outlier prediction. If activity continues rising at the present pace, this prediction will probably be incorrect also, since the maximum will not be anywhere as active as this high prediction.

All told, what we can gather from these predictions is that they are not based on any real understanding of the underlying processes in the Sun’s magnetic dynamo that causes the solar cycle and the sunspot activity. The scientists are essentially guessing, based on extrapolating past performance. And as every stock broker will tell you, past performance is not always a reliable guide for predicting the future.

This then brings us to climate public policy, which presently tries to tell us that we must make major changes in our lives and our freedoms because some climate scientists have predicted that the Earth is heating up due to human activity. Yet those climate predictions are based on even less certain knowledge than the predictions of the solar cycle, especially because the climate predictions also include these uncertain solar cycle numbers in their models.

Science is always uncertain, though some areas of research are more certain than others. Climate science and the future temperature of our Earth falls more on the uncertain end of the scale, no matter what politicians might tell you. It is not only strongly impacted by the Sun and its cycles, there are many other factors (clouds, pollution, volcanic activity, the atmosphere’s complex make-up) whose long term influence on the global climate remain very unsettled. Any one of these might easily offset the increase in carbon dioxide that we are adding to the atmosphere, especially because even with that increase CO2 remains an atmospheric trace gas, far less influential on the atmosphere’s temperature than water.

Repeat this always, like all good scientists do: We don’t know, we can’t be certain, we must question our conclusions at all times, and the only thing certain about certainty is that it will likely lead us astray.