Sunspot update: In May we had sunspots, sunspots, and more sunspots!

It is time for another sunspot update! On June 1 NOAA released its monthly update of its graph tracking the number of sunspots on the Sun’s Earth-facing hemisphere. As I do every month, I have posted it below, having added some addition details to provide a larger context.

In May the sunspot activity on the Sun almost literally exploded, producing some of the strongest solar flares in years as well as the most sunspots since the previous solar maximum in 2014. On several days there were as many as eight sunspot groups on the Sun, with one so large that it was visible to the naked eye on Earth (if viewed properly with a protective filter). 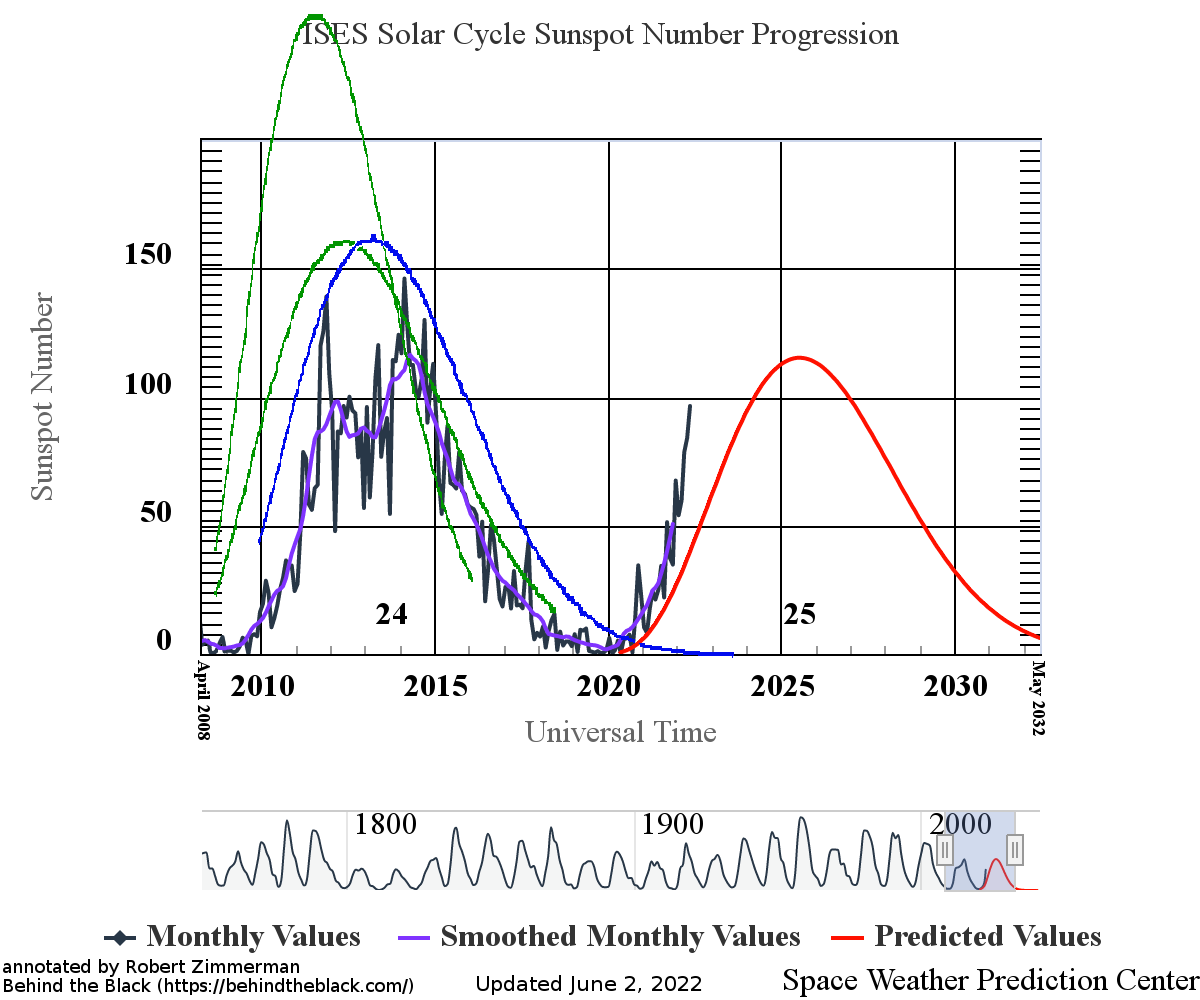 As you can see from the graph, the number of sunspots in May actually exceeded the sunspot count for many months during the middle of the last solar maximum in 2014. As you can also see, solar activity has also rocketed upward since the solar minimum in 2019, far exceeding the pace forecast in the April 2020 prediction. Based on these numbers, it would not be surprising if solar activity tops the peak of that prediction in the next few months, arriving three years earlier than expected.

Moreover, the Sun’s Earth-facing hemisphere has not been blank of sunspots since December 11, 2021. At the present levels of activity, it appears that we will not see another blank day for years.

Finally, the rapid ramp up in activity since solar minimum continues to suggest the next maximum will be much much higher than that consensus April 2020 prediction, making the outlier prediction of a handful of solar scientists — that this maximum will be a very strong one — to be the right one.

The Sun continues to prove the foolishness of relying on consensus in science. As I noted in last month’s update,

Scientific results are not determined by democracy, by who gets the most votes. They are instead determined solely by who gets it right, even if only one person does so and everyone else disagrees. Copernicus proved that. So did Galileo.

Sadly, because the Sun’s high activity is likely going to act to warm the Earth’s climate somewhat in the next decade — based on data over the last few centuries that correlates high activity with increased temperatures — the global warming crowd of activists who pose as scientists are going to claim that their consensus prediction is right, that fossil fuels are warming the Earth. This claim however will still be a consensus opinion, not based on proven data, with so many uncertainties that any good scientist should dismiss it.

Unfortunately, there are very few good scientists left, and those remaining have no power and realize if they speak out the blacklisting culture of today will squash them. Dissent in science on the subject of global warming is simply not allowed.

Nor will there be many dissenters. The present generation of scientists has been well indoctrinated. They all believe global warming is coming, and that warming can only be caused by human activity. They will not question that claim, but instead will be easily convinced that any new climate warming proves it right.

And that certainty will mean they will ignore the Sun. Thus the real mystery — far more complex than any consensus can ever imagine — will remain unsolved.